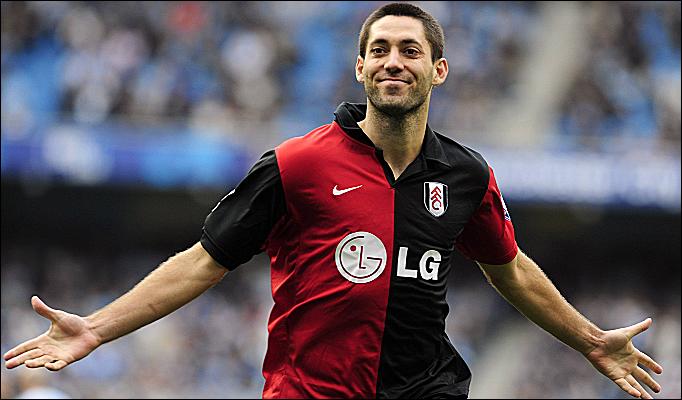 Clint Dempsey is the best US soccer player. He is a midfielder and sometimes striker for the London based Fulham Football Club. I root for them in the English Premier League because they’ve had a nice stream of American players dating back to Brian McBride who played for the Columbus Crew. Dempsey broke McBride’s record earlier this year for most goals scored by an American in the EPL. He has tallied 16 goals in the EPL and 22 in all competitions for Fulham. I had to feature him with Raw being in London. Let’s roll.

CM Punk gets to defend his title against Mark Henry to start the show. Yep, if they’re going to change a title, it’s going to be a curtain jerker. It struck me as funny when Mitchell Cool told us to remember the Hall of Pain. That’s how much they respect our attention span. If he really meant it, he could have mentioned who Henry hurt. Punk ran entirely too far on the barricade wall for a bulldog. Both men are down at the commercial break. Nice of Henry to lift his arms up so that Punk could chair shot him in the stomach. Tell me who’s in the Hall of Pain! It’s an impressive list. Why are you not selling your own wrestler? I don’t care if he’s going to lose. All the more reason really. Got to love the London crowd already. Punk goes with the chair to the face off the top rope. Good call. The Jeritron comes on. He is at the fakest bar ever. Chicago Street Fight. Jericho shows Punk going into the Pilot Inn. Fish & Chips chant. Hilarious. The joint is 206 years old. How bad ass is that? I’d go there. I’d also drink. Jericho felt like he was taped and couldn’t react to Punk. He stunk for that reason. Brock Lesnar gets a video package too.

Sherlock Truth is going to find Teddy Long a job. Santino has on a number of jerseys but only one of the London based teams, Arsenal. They still got booed. Don’t know which team is in that area of London. David Otunga is taking him on for the US Title. Otunga loses his cool after Santino gets his foot on the ropes. Santino ends up winning the match. Jerry Lawler defending an obvious point. These days Cool would still win that argument. Lord Tensai is serious. Or something. They tease the Lesnar video package again.

It’s kiling me that they’re doing a UFC style video package with Brock Lesnar. Jeremy, the tiny one and myself are going to UFC 145 in Atlanta this week. You’re going to see something on the site about it. I’m no expert but have watched quite regularly since Brock debuted. I’m pumped to see Rashad Evans vs Jon “Bones” Jones. Should be a hell of a main event. We can definitely compare and contrast live experiences. We get a video package of Zack Ryder and Kane who are going to have a match. Of course it makes sense to settle a feud on no notice. Except for the commercial break.

I didn’t catch Smackdown last week. I figured Randy Orton would get involved to help Ryder win. With this video package, I guarantee it. Ryder gets booted off the apron and onto the announce table. Kane has been in another atmosphere. Haven’t quite heard it that way before so it sounded awkward. My guarantee didn’t come true. Whoops. The crowd crapped on the promo. It’s too cheeky for an evil heel. Kofi is hitting on AJ. Daniel Bryan is leading Yes chants since it’s now the Yes lock. I’m not sure about this turn of events. That seemed forced.

London gets another video package before John Cena‘s promo. They’re getting as much in ring time as a regular Smackdown. Cena talks about it being the end of his era. Cena is being pretty serious. I’m digging it. He is probably going to lose. I mean, you can’t have Lesnar lose, right? Johnny Wooden GM comes out. Even though Cena acknowledged his unpopularity, yet they bring out the heel GM. Brilliant plan. Johnny did crack me up. CM Punk vs Mark Henry replay.

Sherlock Truth came in to the library thru a book shelf. For some reason, Hornswoggle was there. I’m lost. Lawler doesn’t think Kofi was hitting on AJ. He should have been. The crowd is going crazy for Daniel Bryan. Kofi, high class jobber. Sheamus got fined $500,000. The NHL should be collecting a lot more money these days. I’m not excited about three hours of Raw next week. AJ is the top diva right now. Who else is getting more TV time? Maybe Eve Torres? Eric is loving the London crowd crapping on Kofi. Sheamus tries to attack Bryan but fails. Good stuff.

The Funkasaurus takes on Dolph Ziggler with Vickie Guerrero and an even goffier than normal looking Jack Swagger. Are they trying to make him look worse by the week? A quick DQ because they don’t want either of them to lose. It might be the best thing they’ve done for Ziggler in a while. Johnny & Otunga are talking. Sounds like he’s trying to get Otunga to not wrestle. Eve Torres makes an appearance when Johnny gets an idea. Chief Jay Strongbow video. I like it so much, I don’t hit FF.

Sherlock Truth found Teddy Long a job, the GM of Smackdown. Really? That’s the pay off? I wasn’t expected much and it still under delivered. The Big Show and the Great Khali are teaming against Rosa Mendes with Epico & Primo. Abraham Washington is out scouting. I suppose Khali needs someone. That’s what the WWE thinks of tag team wrestling.

Johnny Wooden GM introduces John Cena‘s opponent. Lord Tensai gets the nod. I was thinking he was absent from a match. I started this too late. I’m nodding off a bit. Tensai still has a laborious pace. Sakimoto attacks Cena. Otunga tosses Cena back in the ring. I do like how they’re concentrating so much on Cena’s mental state. He could redefine himself a bit differently if he wanted. I doubt it’ll happen. Otunga gets an Attitude Adjustment. Green Mist into a sit down power bomb. I’m not sure it helps him much. The hot London crowd didn’t even react to him much. That’s not a good sign for more apethetic fans in the US. -Kevin