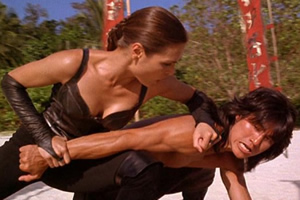 Because of the craziness of my life recently, I’ve taken way too much time to review this episode. For that, I apologize. I want to do an audio about the re-launch but Dan and I haven’t been able to get together. Hopefully, after this review gets posted, we can do that. On with the review.

Joe Dombrowski and Aaron Maguire introduce the show. Matt Cross is defending the Prime Wrestling Title against Jimmy Jacobs. We’re also getting a tag team match pitting Daniel Arkham & Bryan Castle against Bobby Beverly & Nicki Valentino. Benjamin Boone is taking on Izaiah “Mr. RBI” Bonds. Kirst came out crawling on his knees. He scared kids by yelling at them when he took off his hood. Gregory Iron was his opponent. They knelt down across from each other. Iron clothes lined Kirst into the corner while the ref was checking his boots. Iron gave him a top rope cross body. Iron connected on a suicide dive.  Iron tossed him back into the ring. Iron nailed a top rope elbow but only got  a two count. Kirst used Iron’s momentum against him and whipped him in a corner hip toss style. Kirst had a rear chin lock on Iron. A head scissors take over slowed down Kirst who stopped Iron with a shoulder block and a standing double stomp. He only got a two count. Iron connected with a pair of clothes lines & a back elbow. Iron gave Kirst a running forearm in the corner. Iron gave Kirst a Destabiler. Kirst gave Iron a super kick. He then gave Iron a German suplex. Iron jaw jacked Kirst. He then no sold all of Iron’s offense. Kirst locked in a Coji clutch. Iron fought out then got put right back into it. Iron never tapped so the ref had to stop it. Kirst locked it in again after the victory. He attacked him a second time after the bell.

Analysis: Good match. They put over Kirst really well. The announcers talked about Iron needing help. I would imagine Jason Bane or Matt Mason will help him fight the Dead Wrestling Society. So Iron losing now is setting him up for winning even if it’s with a tag team partner. Score:+1.

Michael Facade told Gory that he was a coward. He said he was getting better with every match. Facade said the TV Title was a passion that he’s been fighting for for two years. Facade is going to ask for one more match. He wants to have the stipulation that the belt changes hands on a DQ but if he loses, he can’t go after the TV Title any more. Analysis: I could use a little more pep from him but it’s an improvement from the last time I saw him. Score: 0.

Sex Appeal, Nicki Valentino & Bobby Beverly came out. Jimmy Jacobs made Valentino the leader of their tag team. Dan Arkham & Bryan Castle were second. Valentino starts out against Castle. Valentino tries a go behind. Castle raised Valentino up with a wrist lock. Arkham came in with an elbow off the top rope. Beverly tagged in. Valentino kicked Arkham in the back. Beverly gave him a clothes line. Valentino & Beverly bicker a little bit. Beverly suplexes Arkham. Valentino kicked him in the ribs. Beverly is supposed to hit a held Arkham. Beverly almost punches Valentino but hold up. They bicker which allows Castle to tag in. Castle double clothes lined them. Castle gave Valentino a gut wrench suplex (Old school!) Beverly gave Castle an enziguri then a super kick. Valentino made the pin. Beverly acted pissed after the win.

Analysis: The announcers made it sound like a stolen match but it wasn’t. Valentino was the legal man in the match, so Beverly helping out should just be doing it for his team. Beverly shouldn’t be mad. It furthers the split angle but it was dumb. Match was well wrestled for the most part. Score: 0.

Gory told us that he’s holding the TV Title hostage. He said it just shows the Dead Wrestling Society’s grasp on Prime Wrestling. Gory claimed he didn’t need a DQ to keep the title. He is excited about destroying him one last time. Analysis: He just seems more put on than the other two int he group. He doesn’t have a weird cadence, he wasn’t forceful and he just doesn’t feel genuine. Score: -1.

Benjamin Boone comes to the ring with N8 Mattson. His opponent was Izaiah “Mr. RBI” Bonds. Mattson grabs a mic and tells Boone to put up or shut up since he’s been on a losing streak. Mattson said that they need to add to the Sons of Michigan. He wants them to get stronger. They exchanged head locks and shoulder blocks early. A chop caused Boone to roll out of the ring for a breather. Boone attacked Bonds coming back into the ring. Boone caught him with a flying shoulder tackle. Mattson strangled Bonds while Boone distracted the ref. Boone got a two count after a leg drop. Boone suplexed Bonds. Boone missed a pair of elbows. Bonds fought back finished with a Russian leg sweep. Bonds missed a standing moonsault. Boone followed with a Ron Simmons spine buster and a splash for the win.

Analysis: The match was pretty short but it accomplished the re-establishment of Boone, who needed a win. The announcers noted that he looked better and I agree. He looked like he’d slacked off in the gym department for a while. Boone is looking sharp again. Score: +1.

Jason Bane is pissed off. He is mad at Matt Justice for costing him a shot at his Prime Wrestling Title. Bane said this is the meanest he’s ever been. Bane is going back for the title and he doesn’t care who he has to  go through. Analysis: He still doesn’t seem confident in himself but the delivery of the message was better. No yelling just some anger. Score: +1.

“The Zombie Princess” Jimmy Jacobs came out first. He hid so that when Matt Cross came out, he could attack him from behind. The ref started the match even though they weren’t in the ring. (Weird.) Jacobs tossed Cross back in the ring. Jacobs taunted the crowd. Cross caught him with a thru the ropes drop kick then a suicide dive. Jacobs tripped up Cross on an attempted spring board move. Jacobs bent the rules but broke before the five count every time. Jacobs put Cross in the Tree of Woe and stomped away. Jacobs gave him a running knee that got him out of the Tree. Cross gave Jacobs a back elbow and a standing moonsault. Jacobs bit Cross’s hand. Jacobs gave him a reverse chin lock. Cross fought out and clothes lined Jacobs. He followed up with a back elbow. Cross nailed a hand spring elbow then went for his Liu Kang corner stomp. Jacobs spun Cross around but got caught with an enziguri. Cross missed with a shooting star press but landed on his feet. Jacobs speared him but only got a two count. Jacobs missed a charge into a corner. Cross kicked him in the face from the ring apron. Cross double stomped Jacobs. Nicki Valentino distracted the ref. Cross rolled up Jacobs but only got two. Cross knocked Valentino off the ring apron. Jacobs wrapped a chain around his hand while the ref looked at Valentino on the floor. Cross got him in a fireman’s carry then gave him a Death Valley Driver. Cross went to the top rope and took out an arriving Bobby Beverly & Valentino. Cross went for the sunset flip but Jacobs held onto the ropes to get the pin. Jacobs is the new Prime Wrestling Champion. Beverly looks disgusted.

Analysis: I’m not a fan of giving the title to someone who is part time, even if it gives the feud with Johnny Gargano some extra punch. Gargano is a part timer too even if he started in PWO/Prime Wrestling. The match was pretty good but I always want Jacobs to find out what a gym is. The guy is small to start with. The least he could do is lift some weights. Maybe do some cardio. He’s not good enough in the ring to get away with looking like a skinny fat ass. Score: +1.

Final Score: 3/7. Final Analysis: I think it was a better story line day than an in ring day hence the final score. Iron against the Dead Wrestling Society moved forward, Gory & Facade continued their feud, Sex Appeal breaking up moved forward, the Sons of Michigan gave us a nice teaser and even if I’m not a fan, Jimmy Jacobs vs Johnny Gargano had their feud upped with the Prime Wrestling Title on the line. I may not be a fan of the direction of all of them especially the last one but it makes sense. Cross has almost surely needs to move on to another feud and I’m not sure who that is. Beverly would be ideal if he weren’t getting ready to turn face. Maybe Benjamin Boone. We’ll find out soon enough. -Kevin