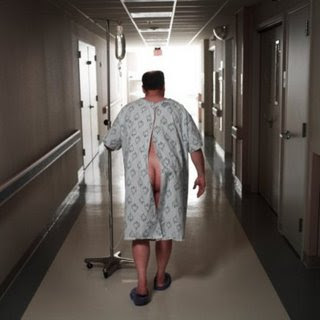 Tweet: Oh, the picture of Hogan in the hospital is priceless for comedy. Pay Back Time doesn’t sound like you’re mad enough.

Tweet: How neither Taz nor Tenay guessed it was Aces & Eights. Ah nevermind. They’re terrible announcers. After The Show: The announcers sat there and wondered why Kurt Angle wasn’t showing up. I hate announcers playing the super dumb card.

Tweet: Remember when Pope had lots of untapped talent in WWE? Yeah, it’s getting foggy for me too. After The Show: I remember when he had lots of talent in TNA too. Then he got caught in the endless Devon’s children feud after a botched feud with Samoa Joe, his opponent last night. Some people have no luck. He’s one of them.

Tweet: TNA wants you to check Twitter so that you can see that their roster got even more bloated with Chavo Guerrero.

Tweet: At least TNA has had the good sense to keep Robbie T out of the ring. They need to kill this lame gimmick though. After The Show: I think the guido gimmick could still work but neither TNA nor the WWE have gotten behind the guy and allowed a consistent theme to be established. Robbie E just happens to be more lame than Zack Ryder who has his own take on the gimmick that feels much more personal.

Tweet: Jeff Hardy is a moron. After The Show: He was a moron because he got counted out attacking Robbie T. You’ve beat worse odds plus, do you lose your hearing when you attack someone? Shouldn’t you be able to hear the ref especially when you’re no more than ten feet from him?

Tweet: EY mention the name of the program you’re hosting you dumb ass! After The Show: Come on, I even mentioned it in this dumb column. You need people to watch your show to get it renewed. Why mention a new program without a channel or show name. Maybe the dumbest thing in wrestling for this week.

Tweet: Why is Daniels drinking a martini while in ring gear with his belt on in the locker room? Alcohol & sports don’t mix well. After The Show: I drank a beer before going into our indoor soccer playoff match. What a terrible plan. Even that little alcohol killed my cardio.

Tweet: Aces & Eights just seems lame after Nexus. I want to see something worse than a tie choking. TNA needs to fire someone.

Tweet: Everyone else tonight had 4 matches in the BFG Series. AJ only has two. When are you going to clear up this major problem?

Tweet: Anderson’s pin killed a good match. No reason AJ should have stayed down after kicking out moments earlier. After The Show: I know they’re trying to play up AJ not being able to concentrate but come on. If Claire had showed up, I might give it a pass.

Tweet: Come on, he looks passed out in all of the pictures. She drugged you, you dolt! Women are whores except @birdisthewyrd After The Show: Since I know you’ll read this, you’re not a whore either honey. Just sending some love to a loyal follower.

Tweet: Taz, just because you slept with a woman doesn’t mean they became pregnant. Somebody needs the birds & bees talk. After The Show: Just another moment of stupidity. Taz has children. Did your wife pop one out every time you’ve had sex with her? Plus, shouldn’t one of the announcers notice what I did, that AJ looks passed out in every picture? Have at least one of the announcers present another side.

Tweet: Good way to put heat on Daniels. RVD is useless. The Bellator guy should replace Tenay. After The Show: Daniels needs heat if they’re going to stretch this feud out with AJ even longer. Daniels also lost the big match at the PPV so he needs to get some heat back from that loss so he can keep being cocky.

Tweet: I think Aries is killing it but wasn’t Storm too? Yes in my opinion. Why did Aries get the 1st crack then? Mystery to me. After The Show: I can understand shooting down Bobby Roode who didn’t have much momentum when they pulled the rug out from him. I’m still lost on what happened with Storm who had the proper build up. Again, not trying bash Aries just wondering why he got the nod and not Storm.

Tweet: I like Bully Ray right now but I’m bumped that Magnus isn’t getting more love. After The Show: I meant bummed. Magnus doesn’t need to be on top of the card but I think he’d be a good guy to take over Devon’s mantle of TV Champ since they’re finally getting some push behind that title.

Tweet: Chavo Guerrero gets a big video package for his debut. What a hack organization for treating this like a big gain.

Tweet: The one guy in Aces & Eights does lok to have Luke Gallows. DVR cuts off when the Roode attack happens. I hate over runs. After The Show: I don’t like over runs on either show. @AntiChristJC also pointed out that one man had Chris Masters build. I must have missed him. It seems I didn’t miss much either. I still think this group is a lame Nexus rip off.