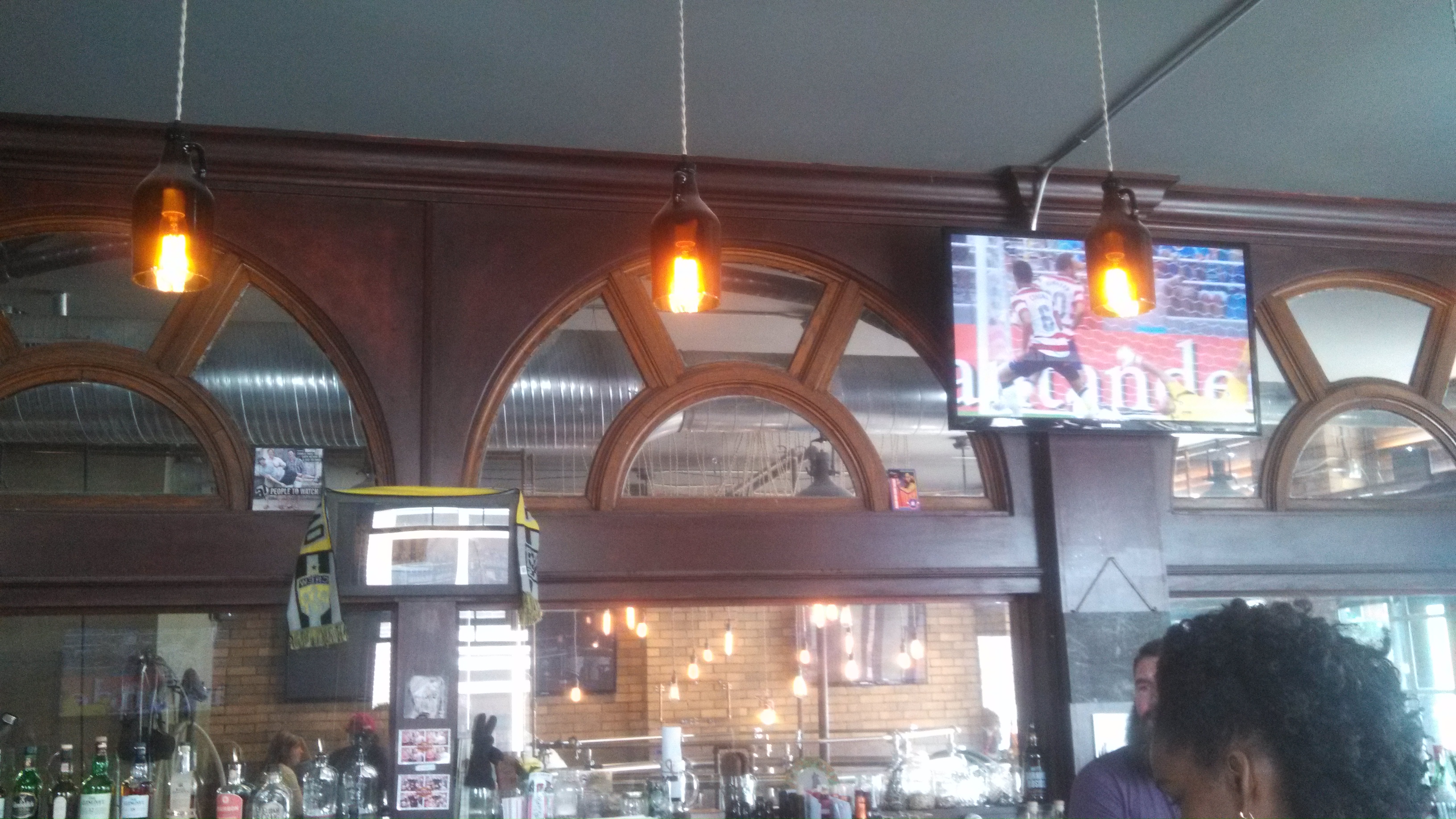 Looking into the bar area thru the old windows of Brown Hall into the brewing area.

My lady decided to purchase a Groupon then toss her half to her father so that we could attend a tour of the brewery together. I have had their beers before at various locations around town but I had never been to their bar and brew house. We had to wait for the tour to start so her father grabbed a Wildcard! English Ale and I snagged a Maibock, which isn’t listed on either of their menus. It got my attention because it was a malt heavy drink. It delivered too.

The Maibock from North High Brewing

Gavin, one of the owners, was the leader of the tour although he was about as hoarse as me last week after Wrestlemania. He had done four tours the day before and he had to shout which killed his voice. It was a slow afternoon so it wasn’t too hard for him to talk to us. He first talked about the design of the bar. They re-used plenty of materials to build just about everything in the bar. Old growlers were used to create light fixtures. Old mail boxes from New Orleans are now used to house patron’s glass mugs that are made from any broken glass at the bar itself. It’s quite a deal too as you get a 20-24 ounce mug and only pay for a pint when it gets filled. They have multiple windows above the back of the bar that are from the now demolished Brown Hall, which used to be the architecture building at Ohio State. That isn’t the only re-used piece of wood from Ohio State as all of their tap handles and their blinds on the front of the building are from the old seats at Ohio Stadium. Rail road tracks are used the foot rest at the bars. I’m sure I’ve forgotten some of what was re-used but it was all very well put together for a fairly small space just south of campus.

Their tap handles from old seats in Ohio Stadium

Gavin then moved on to talk about malted barley, roasted barley, hops and water which are the main ingredients in beer. The malted barley does have a different taste than when it goes into a beverage. We were advised not to eat the hops straight so I declined. I know I don’t like IPAs that heavy in hops anyway. Gavin moved us into the brewing area, which you can see from the bar area because of the Brown Hall windows. They have two kettles that are 60 gallons to make their mash in. When brewing for themselves, they cook it for 7 hours. The cool thing about this brewery though is that you can pay them $190-240 to brew your own beer. When they brew for you, they only use the kettles for 3 hours. Your costs gets you 15 gallons of beer which is nearly a keg. My neighbors and I are debating doing this. At the present moment, they are splitting time brewing customers beers and their beers which has caused problems from time to time supplying their own beer. They will be expanding to a facility on 5th Avenue and Cleveland Ave where they will upgrade to two 600 gallon tanks to make their own beers. The location at the bar will become just for customers only. That is a very tasty way to solve the problem. Gavin then walked us through the rest brewing process and showed us their storage area, which contains quite a large amount of beer. The casks the beer is stored in used to only be on the floor and are now stacked three high. It’s only another reason to get the 10,000 square foot facility up and running.

After the brewery tour, we got shirts and then we have an “optional” tasting for legal reasons. They were out of two of their beers but we still only four of their available six beers. It just so happened that her father & I ordered the two beers not in the tasting. Gavin said that they list their beers in order of IBUs because it is a measurable taste unit and will help people judge which beers they like. They started us off with their Blonde Ale which is 16 IBUs and 4.2% alcohol. It had a nice crispness to it and complexity that was perfect for a nice warm day as it was. They moved on to their Queen Madine Chocolate Milk Stout. Gavin said that most people assume darker beers are more bitter but this one is only 20 IBUs so there was more of a bite to it but the sweetness of the milk helped to even it out. One participant bewildered Gavin when she told him she didn’t like Left Hand Brewing’s Milk Stout, which he was about to use as an example as an excellent one, and she preferred theirs. I liked this beer a lot but I think Left Hand beats them out by an udder. Queen Madine was 6.0% ABV. We moved on to their English Special Bitter or E.S.B. It comes in at 40 IBUs which is where my lady’s father tapped out. I’ve worked way beyond this point. I really enjoyed this beer as I haven’t had this style since being in Europe in 1997. There was a lot more to it than the bitterness. It had a sweetness and even a back door hint of malt which made it really complex and tasty. The E.S.B. was 5.9% ABV. The last beer of the tasting was their Indian Pale Ale, which is so named because the English sailors realized that beer lasted longer when it had more hops in it. For an IPA, I don’t think the 70 IBUs is that high since I’ve tried beers over 100. It’s certainly a heavy dose but nothing I can’t handle. Her father didn’t even try and handed me his sample. I didn’t argue. It was a good beer but the E.S.B. remained my favorite. The IPA came in at 6.3% which made it the most potent beer of the tasting.

I will definitely try and make a habit of swinging by there more often though it’s marginally harder to get to than some of the other breweries in town. Now if I can just figure out a beer to brew with my neighbors and an occasion to drink all of that beer. – Kevin