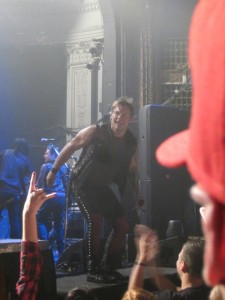 – On Friday evening, The Lady & I attended the Theory of a Deadman show which more importantly featured Fozzy opening up for them as their main support. I was not surprised by the small-ish crowd because they were booked at the Newport Music Hall which is where the smaller acts are booked in Columbus. I was unaware that Theory of a Deadman was still around so that probably didn’t help the crowd either. 3 Pill Morning was the opening band and they were a pleasant surprise. Solid rock band with a heavy edge in places. Fozzy got about fifty minutes as the second band. Chris Jericho came out wearing his light bright jacket but switched to the vest above after the first two or three songs. Jericho sounds better live than produced but the band still played loudly enough that his vocals were not as prominent as most lead singers. I’ve liked his backing band since they were in Stuck Mojo. I dig the sound of Fozzy because they just take out the rap elements from Stuck Mojo. We didn’t stay for Theory of a Deadman because neither of us cared about them. If you want to check out The Lady’s photography, go to our Facebook page which has plenty of pictures from 3 pill Morning and Fozzy.

– The news came out on Friday that Dave Batista will be joining Gina Carano in a Robert De Niro movie called Bus 657. Batista will play the main criminal’s side kick. I wonder if he’s worried about how creative will book him when he comes back from another movie stint.

– Brooke Tessmacher & Robbie E made their debut on “The Amazing Race” on Friday. Somewhere in Nashville, Dixie Carter was hoping that this stint on a reality show will drag their viewership numbers back over one million. Don’t worry Dixie, you’re getting one viewer per 318 people in this country. It’s better than Stunt Granny is doing. – Kevin

(Thanks to Prowrestling.net & Deadline.com for the news.)