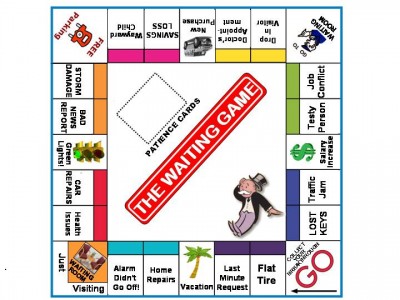 NDoesn’t everyone love the waiting game? You call someone, set up an appointment then they’re late by five hours and fifteen minutes screwing up your entire plan for the day and sometimes next day? I got to do that waiting for The Lady’s vehicle to be towed away to the great scrap heap in south central Columbus. No more waiting for my column, let’s roll.

HHH & Stephanie McMahon are the first people on TV tonight. Steph gets to label CM Punk a quitter without saying it and then pivoting the comments to Dean Ambrose. His actions won’t be tolerated. Paul Heyman saves us from more boredom from these two. They’ve been good in their parts. Aside from Steph making the Bellas worth while for a moment. He lists all of the reasons why Brock Lesnar may have a problem with The Authority. Just as Steph gets her hackles up, Seth Rollins comes out. Rollins says that cashing in was his decision alone. Rollins was trying to make the best of his opportunity. No one wants to see John Cena win the title again. Looks like Dean is getting a back seat in the feud. Rollins apologizes for the misunderstanding. Heyman shakes his hand but tells Rollins he’ll be dealing with Brock Lesnar if that happens again. Rollins turns his attentions to Dean Ambrose, who shows up on the big screen. Ambrose is willing to give the brief case back if they come and get it. John Cena pops up and attacks Rollins. Why is The Authority mocking Cena? He’s gotten the better of them at every turn except for Brock Lesnar who is willing to turn on them as this segment just demonstrated.

Steph tells Rollins he’s staying put. HHH tells Jamie Noble and someone else I vaguely remember. They aren’t allowed to use sledge hammers. Look for weapons yourselves, they’re all over the arena. Cesaro is in the ring. Dolph Ziggler comes out next. The Miz comes out last with Damien Mizdow. I watched Cesaro vs Ziggler from Smackdown directly before starting Raw. Good match up. I expect a decent one at the least. Ziggler double DDTs his opponents. Ziggler hits a neck breaker & DDT. A second double move is one too many. Mizdow grabs Ziggler’s leg and almost costs him the match. Miz gets uppercutted by Cesaro. The Miz gets kicked in the groin. Ziggler puts the Figure Four on The Miz. Cesaro makes the save with a double stomp. Miz hits the pull through clothesline on Cesaro. Miz gets another uppercut. Ziggler super kicks Cesaro. Ziggler covers Miz for the win. Dolph celebrates with the crowd. Hey, stability with the belt. Though I’m not convinced this was a good match to toss out there on a random Raw. Skith with Jamie Noble that was supposed to be funny. Supposed to be are the key words.

The Wyatts have a cool ass vignette in which Bray Wyatt lets Luke Harper free. Interesting turn of events. Damien Mizdow & The Miz complain to HHH and Steph. HHH laughs at them. Mizdow gets a match with Sheamus. HHH threatens to fire the Miz.

They have to recap Total Divas because no one is watching any more. Tyson Kidd is at ring side with Natalya. He keeps playing video games. Because everyone is so distracted at work these days, they play video games on their phone and the boss doesn’t say anything. Rosa Mendes is taking on Layla El. Summer Rae comes down for a ladies brawl. Lay Out for the win. Woof. Dean Ambrose is wondering around.

Dean Ambrose was in the concessions stand. The hot dog gag is completely over with the crowd. Ambrose knows why he wants the briefcase back. Jamie Noble & the other guy show up. They end up going to the back. After Ambrose gives away the merch, Seth Rollins comes out. They bring more security. Ambrose backs out of the ring and leaves the briefcase which is surely rigged. Green slime is the gag. Rollins freaks out.

Even Randy Orton & Kane are laughing at Rollins. They are taking on John Cena & Ambrose later tonight. Rollins claims it’s an electric razor. The humor tonight has been atrocious at best. Mark Henry comes out to apologize when Bo Dallas shows up. Dallas wants the Hall of Pain to be closed so that Henry can become a Bo-Liever. They are fighting each other. Why is a question I won’t be able to answer. Running Bo-dog for a victory that is supposed to help him but was even more comical than any win over the Great Khali.

Bo Dallas is being interviewed by Renee Young. You need to Bo-lieve. Mark Henry destroys him. I’m even more confused now. The announcers have to pimp the Network even more. The Dust Brothers tell us that the planning phase is done. The Cosmic Key is their fate.

Brie Bella comes out before the break. Nikki Bella comes out in a dress. Nikki levies the same charges she’s been levying for a couple of months. Nikki picked Eva Marie & Cameron for another reason that I’m confused on. Aside from the Total Divas part. If Nikki were really mad at Brie, she wouldn’t limit he list like that. Cameron executed a suplex. That will be the biggest surprise of the nice. The crowd is so interested in the match that they chant at the announcers the whole time. The announcers don’t call the match because of it. Brie rolls up Cameron for the win. Woof.

Adam Rose is at ring side. Bunny is now on the wrestlers page. Slater & Gator come out with mini-Gator aka Hornswoggle. They are taking on Los Matadores. Slater tags in on his own. Slater gets beat on by Fernando (I think since the announcers don’t know) El Torito meets up with mini-Gator. Slater takes advantage of Fernando looking at the animals fighting. Slater wins. Titus O’Neil slams down El Torito. Mini-Gator roll. Rose low bridges O’Neil. Bunny & Rose distract Slater. Double Samoan drop by Los Matadores.

It’s nice of Lana to spiff up her suit selection with a little bit of color. And cleavage. Breast Cancer Awareness? Big Show comes out so that we can see these highlights more. Rusev speaks and says he’ll break every bone in Big Show’s body. Rusev backs out of the ring when Show comes down. I’ll be seriously disappointed if this is indeed leading to Rusev taking on Cena. Even John Cena doesn’t deserve this dreck on his resume. Big Show pulls down the Russian flag. Lana & Rusev freak out. Rusev rushes the ring and gets tossed back out. John Cena is welcomed by Renee Young. He’s happy to be fighting with Ambrose tonight. When he talks about who gets Rollins first, Ambrose strolls in. They still have a pissing match over it.

AJ Lee skips down to the ring. Paige comes out to announce AJ’s opponent and her new bestie, Alicia Fox. AJ uses her speed to take advantage early. AJ jumps on Paige & Alicia from the top rope to the floor. AJ tries to drag Paige into the ring. Fox takes advantage and Axe Kicks her for the win. They beat down AJ afterwards. The crowd is curiously silent. The Wyatts vignette plays again. The stock footage images are the only thing that irritates me.

Sheamus takes on Damien Mizdow. The Miz tries to regain his cred by inflating his ego. Mizdow seems to be trimming up some. Mizow is getting in more offense than I expected. Sheamus fires out of the corner. High running knee is followed by one in the corner. Ten Beats of the Ballaron. The Miz comforts Mizdow. Sheamus tosses Mizdow into the Miz. Sheamus tosses Mizdow back into the ring. Brogue Kick for the win.

Hulk Hogan does the Susan G. Komen spot with the breast cancer survivors and to hawk merchandise. Kane & Randy Orton are sick and tired of protecting Rollins’s ass. Steph gives them a pep talk. They can’t squash talk about them needing a killer instinct. Kane isn’t buying the bait. Steph doesn’t care and wants results.

John Cena starts against Kane. The heels get early control before a break. Being on time to view this show is over rated. I have a good laugh when Michael Cole has to say the words “If you just joined us…” at 10:58. Hilarious. Side slam on Cena keeps the offense going. Randy Orton takes over again. Dean Ambrose finally gets in and crazy on Orton & Kane. Sling shot clothes line. Dirty Deeds on Orton when Seth Rollins attacks. Ambrose catches his foot on a suicide dive so Kane has to look like an idiot and go down without being hit. Cena & Ambrose fight over who will fight Rollins. Orton RKOs Ambrose. Orton isn’t done jobbing to former Shield members. Choke slam by Kane. Curb Stomp on the brief case. Cena tries to make the save. RKO by Orton. Choke slam by Kane. Curb Stomp on the brief case. – Kevin