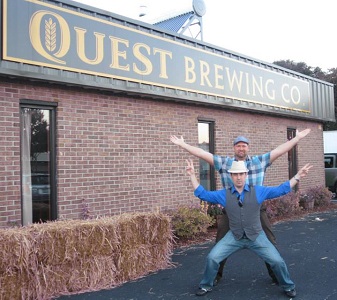 After downing some samples at the Southern Growl, the Lady & I headed back to the hotel to change for the rehearsal dinner. We hopped in Jeremy’s car and headed to Quest Brewing Company which was nearby the dinner spot. After having two of their beers already, I settled on four more samples to try.

Cantaloupe Island Wit – Belgian Witbier – Thankfully Quest didn’t have gigantic sampler trays or else we might have been late for the rehearsal dinner. This beer is part of a “Limited Series” line that Quest is brewing. This beer is named after a Herbie Hancock Jazz standard of the same name. I don’t think it has anything to do with actual cantaloupes. They also don’t have any information on their site so I can’t confirm or deny it’s use. It did have the yeasty Belgian vibe you get from this style of beer. It was also light and lightly spiced. It’s low ABV at 5.0% makes it a session beer. This Wit got things off to a solid start. 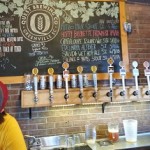 Edelmann Altbier – Altbier – I can now count on three places that have an Altbier, Zauber & Crescent City in New Orleans are the others. I love this style because of it’s malty goodness. I’d put this beer in the middle of the pack. Since I like all of them, it’s a tough battle but I like this one a bit more than the one from Crescent City. The malty goodness is alive and well with this one. It is also 5.0% ABV which means I’d be more than happy to continue drinking this beer for a whole evening. Since it is in their “Limited Series” list so I may not get the chance to do an all day drink-a-thon with it.

Nitro Milk Stout – Milk Stout – This beer is last one I tried from the “Limited Series.” This beer wasn’t quite as sweet as other milk stouts that I’ve tried but it did have the creamy smoothness that comes with them. It wasn’t heavy on coffee flavor but it did have a good nuttiness to it. As with other beers in this category, this one was also 5.0% ABV. They sure do like their low dose beers. It doesn’t hurt when they’re tasty. 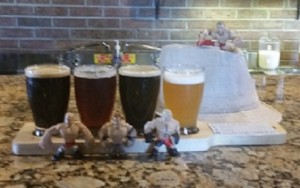 Smoking Mirror – Smoked Porter – This beer is part of the “Barrel Aged Series” which has two other beers in it. Smoking Mirror was the only one available when we went in though. The idea of a smoked porter sounded good to me. You add in bourbon barrell aging and cocoa nibs and I’ll definitely try it. Cocoa nibs have a bit of bitterness to them so it came through. The Bourbon comes through as well but it isn’t that heavy which is a positive in my opinion. The smoke also comes through in much the same manner. The roasted malted barley to me stands up to these flavors better than regular malted barley. Smoking Mirror is also very smooth and creamy. In it’s original state, this beer sits at 5.5% ABV and 30 IBU. When it comes down to brass tax, this beer or their Silence of the Yams I tried at the Southern Growl were my favorite beers of theirs. If you’re in the area, definitely give these guys a try. – Kevin