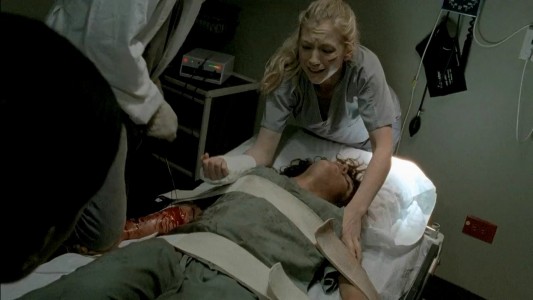 Jeremy:  Nah he is dead. Probably at bottom of elevator shaft. I thought the episode was ok but when they added the reveal of Carol on the gurney, while giving us a holy shit moment, it made the rest feel unimportant.
Kevin:  It stems from the fact that the writers haven’t ever given us much of a reason to invest in Beth. The woman officer mentioned the suicide attempt but even that was down played after the one episode it happened in. Her running around with Daryl before getting kidnapped was her first extended camera time since that attempt.
Jeremy:  Good call. As soon as the audience is given any investment she is taken away. In meantime the audience has been exposed to non-stop bad assery. She shows back up whimpering and scared it was such a drastic change in direction.
Kevin:  Hadn’t thought of it that way. The Walking Dead usually has a slower pace to it as the episodes build. Chinese Kevin expected them to be talking for three episodes after the season opener. This was the first episode that was a majority of talking this season.
Jeremy:  Yes it was and a lot of the same thing repeated. It did contain one of the better gore moments this season.
Kevin:  Beth stomping on the walker’s head?
Jeremy:  No, the sawing off of the girls forearm and hand. Brutal stuff just knowing she was awake as well. Then the psychological part of it knowing she was being kept alive against her will so Gorman can continue owning her.
Kevin:  I’m not sure how I forgot about that. They took their sweet time with that segment too. No blowing through that painful procedure.
Jeremy:  The question needs to be asked; worse amputation Herschel or Joan?
Kevin:  Do you mean Hershel’s leg or head?
Jeremy:  OH man, I forgot about that. Poor bastard was mutilated. At least Joan got to go out on her own terms and tell Gorman ” Fuck You” at the end. Herschel just got chooped up again and left to turn.
Kevin:  I’d go with Joan’s amputation as being worse only because they used a garrote wire. Double yuck.
Tweet