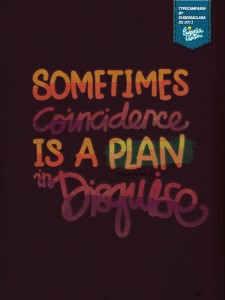 Sometimes Coincidence By Eugeniaclara on deviantart.com

I find it quite amusing that my DVR decided not to tape WWE Raw for some reason tonight. Maybe it’s telling me to follow my own advice and only watch Live programming on the WWE Network. I re-set it to record but the column for tonight has already dropped the first hour. I’m sure the droves of fans who come here are bummed.

John Cena starts my evening. I really dislike Rusev getting another match with John Cena. He’s still a great viable heel but he’s going to have to lose to Cena for the third straight time. Everyone that has done that has been flushed down the proverbial toilet. I don’t wish that on Rusev. Heath Slater answers the challenge. Rusev assaults him after one of the funnier promos I’ve heard in a while. Lana is playing to the crowd. I don’t like her and Rusev splitting up either. Rusev can carry his end on a mic but I like the package better. She doesn’t wrestle from what I understand and the WWE doesn’t do women managers.

I didn’t care whether R Truth or Stardust won. They both have enjoyable characters but you know they stand no chance to win King of The Ring. At least have half of the match a possibility to win the crown. I should mention R Truth won.

I have no problems saying I don’t care that Rosa Mendes is with Adam Rose. She cost Fandango a match but I’m not sure why Fandango is supposed to be jealous. He’s been with two women already so he won’t have a hard time catching someone else. Rose isn’t a step up to lord over Fandango either. They’re both in jobber hell. Brie Bella is being positioned as a baby face by acting as the mouth piece for her husband. Naomi continues her awkward heel turn by pushing her down and acting sassy. I remain confused on who thinks both of these actions make sense.

Let it be noted that Naomi wearing the sickest pair of wrestling boots is not a good idea when you’re trying to be a heel either. Brie doesn’t have Nikki on the head set so this match is much fresher. Naomi wins again.

Even though Dolph Ziggler cost Dean Ambrose the match, the main part of this match was the announcers being correct for a change. They noted that Dean Ambrose was in a match for over an hour the previous evening. If Dean Ambrose isn’t selling that kind of match, no type of beating can be sold. Sheamus should have won, then started to beat on Ambrose after the match when Ziggler makes the save. Why is that complicated?

Damien Sandow gets to give a nice speech. I’m mystified as to who said he wasn’t entertaining considering most people disliked the smarmy gimmick. How does that not make you entertaining? I don’t ever want to be in Vince McMahon’s head. It sounds like an awful place. He still does a mimic gimmick when Curtis Axel tries to rain on his parade.

I was going to be disappointed to see Neville or Luke Harper lose. I enjoy both of them quite a bit. Neville is too early to carry the crown and I don’t feel like Harper is being given that light now. He’s been buried twelve ways to Sunday since parting from Bray Wyatt. Make that thirteen ways to Sunday as Harper took the loss. Good showing for him and Neville.

The announcers reminded me that I really enjoyed the Roman Reigns vs Big Show match last night. It was part of the reason I am thinking about only watching WWE Network programming. The finish was a blast with Big Show going through the Spanish Announce table. The over turned table is a bit silly but I can over look that with Reigns standing on him. Randy Orton, Kane and Seth Rollins helped Reigns bring about an entertaining main event. Orton won with an RKO after Kane turned on Rollins after some mishaps. I don’t care about the Kane vs Seth Rollins feud. Kane shouldn’t get a title shot. Rollins beating Orton is a step above Kane too. Roman Reigns is an idiot for being happy about a three way match. These things end for the champion 90% of the time. – Kevin