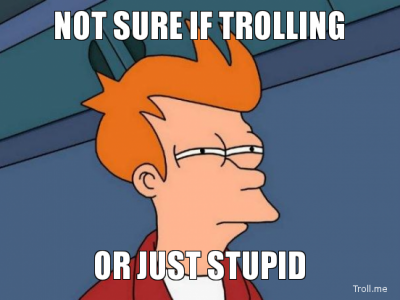 If you can’t read the fine print, it says troll.me saved from gotsmile.net

I wasn’t sure if I was going to do a review of this show until Dixie Carter invited out Bully Ray as the new general manager of Impact Wrestling. Bully Ray talking about restoring the glory of TNA made me do it. This set of promos is one of the most unintentionally hilarious promos of all time. I was laughing out loud. My dogs continued to snore. I’m not sure if Impact Wrestling is trolling me or just stupid.

The over the top battle royal to start the action was like most battle royals. I don’t pay attention until there are four people left. In this case though, I waited until three people were left. Eric Young, MVP and Drew Galloway were those persons. Since EC3 is the champion, it was an easy pick. EY teams with MVP but then turns on him. Drew Galloway wins after dumping EY. Galloway loses the war but immediately gets the title shot. Not a bad switch.

Mr. Anderson being interviewed by that ghoul Mike Tenay is priceless. I didn’t think Anderson was my age. Wow, has he gone nowhere fast. He’s won the TNA Heavyweight Title a few times but even here he’s been floating in the upper mid card with no real sustained time on top. Bully Ray is right to give Spud a pep talk. He did have a solid match with Kurt Angle.

Brooke Tessmacher took on Taryn Terrell for the Knockouts Championship. It was your standard fair of interference from the Doll House to keep her on top. That was until the lights went out and Gail Kim showed up in a sexy female ninja. She takes out Marti Belle and Jade. Taryn is distracted. Butter Face Maker (X Factor) for the Brooke win. I’m not sure why anyone wants to see another feud between Kim and Terrell.

Kurt Angle announces that he has a tumor in his neck that will be surgically removed. He will be on the shelf but gets a title shot when he comes back. Eric Young continues to play crazy person. He wants Angle on the shelf forever. He attacks but doesn’t really get the upper hand. Chris Melendez makes a momentary save. Young ends up hitting the pile driver on Melendez to keep that feud going.

I’m glad they show a replay of the Magnus vs James Storm match from last week because that means I’ll get through this show before bed time. Thanks for the FF!

Drew Galloway is taking on EC3 for the TNA Title. EC3 tries to get this pawned off to next week but to not avail. Drew is tired, why are you trying to get out of it? Tyrus is at ring side as usual. We’re supposed to feel Drew is safe when Eli Drake comes down to the ring to counter him but some foreshadowing earlier in the show makes me feel like Drake is going to cost Galloway the match. Tyrus goes to interfere when the referee is down. Drake hobbles into the ring. Tyrus backs off. Drake whack Galloway with his crutch. One Percenter by EC3 for the win. TNA has never established the brotherhood bond they talk about between Drake & Galloway so it doesn’t mean as much as say Seth Rollins turning on Dean Ambrose & roman Reigns. – Kevin