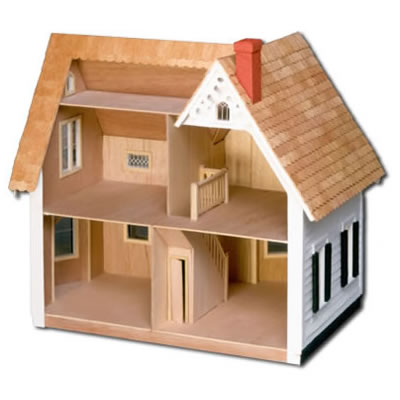 This looks similar to what my father built for my sister. Her’s was at least one room longer. From greenleafdollhouses.com

Beat Down Clan (MVP, Kenny King, Low Ki & Hernandez) vs The Rising (Drew Galloway, Micah & Eli Drake) – Josh Matthews and Pope have to sell the shit sandwich of this rivalry. I’ve got no sense of what drives Micah or Eli Drake. Hernandez was just introduced as a member of BDC last week so he can’t have bad blood with any of the Rising. Micah gets eliminated fairly quickly to make an already lop sided match even more so. Eli Drake gets a hot tag but ends up finishing his rally by jumping onto MVP outside. Drake injures himself and is eliminated. Is Galloway ready to pull a Shamrock? Matthews just said Galloway had zero chance so that means Galloway is going to pull it off. Low Ki kicks Kenny King by accident. Galloway rolls him up for an elimination. Galloway then covers a downed King. Hernandez hits a Border Toss. MVP comes in and hits the Player Maker. MVP allows him to get up. Drive By Enziguri for the win. The Rising are done. No one cares.

Magnus acts like all is peachy now. Mickie James is pissed at James Storm. He comes out and takes a verbal beat down from Mickie. He does offer to bring a woman with him to one final week next week. I’m not excited.

The last match in the five is between The Wolves & The Dirty Heels. Eddie Edwards is the first person to get isolated and to take a beat down. Shortly there after, they announce that ten minutes has elapsed. Richards comes in on a hot tag. Matthews described it poorly but pointed out what few announcers do, that the rested man (Davey Richards) should be able to do more damage. The Dirty Heels crotch the Wolves for another commercial. Eleven Thirty left and still no pins. Edwards saves a pin as the announcers ponder whether will even be a pin in the time limit. Richards double stomps Bobby Roode. Edwards gets the tag and suicide dives Aries. Missile drop kick on Roode in the ring. Back Pack Chin Breaker by Edwards only gets two. Roode kicks out after a series of moves from the Wolves. Edwards kicks out after a sling shot elbow. Austin Aries comes in and locks on the Last Chancery. Richards breaks free of Roode and breaks up the submission attempt. Roode breaks up a pin attempt. He pulls Richards outside. Spine buster by Roode. 450 Splash by Aries on Edwards for pin 1 with four minutes to go. Aries suicide dives onto both of Wolves. Super back cracker and the Wolves get a pin 2 with just over a minute to go. Roode cracks Edwards gets whacked by Roode with a title belt. He kicks out. Roode goes for the Roode Bomb. Edwards turns it into a roll up for pin 3.

Taryn Terrell is defending the Knockouts Title against Awesome Kong and Brooke. Martie Bell & Jade run interference to allow Terrell to win in a match that doesn’t deserve more typing than this.

Jeff Jarrett promises more surprises about TNA & Global Force Wrestling. You’ve been hyping GFW for three years and nothing has happened. Why should I believe you? Why?

EC3 brings Tyrus to the ring. Kurt Angle comes down second. JB does the usual big introduction for the main event. I just sat back and watched this match. I liked the quality of the match but I am sort of confused about how it played out. Tyrus interfered in the match but he almost cost EC3 the match once and then got himself tossed on purpose (basically) by barely poking Bryan Hebner in the stomach with a chair. This led to Kurt Angle applying an ankle lock and grapevining the leg. EC3 fought through the pain and almost tapped but finally kicked Angle off. Angle stalked him for an Angle Slam but EC3 turned it into a roll up for the win to become new TNA Champion. That’s a good guy thing to do, fight through the pain and then get a cheap win on a heel mistake in stalking his opponent. EC3 is a good wrestler but I continue to say I see why the WWE let him go. He’s not above most of the NXT talent let alone any of the talent on the main roster. Good for Impact going with a fresh face though. They did make him since NXT wasn’t really a big thing by the time he left. He made some brief appearances but in no way would I call them career defining. He’s stepped up with this character but I still think it could be played better. What a back handed compliment to end on. – Kevin