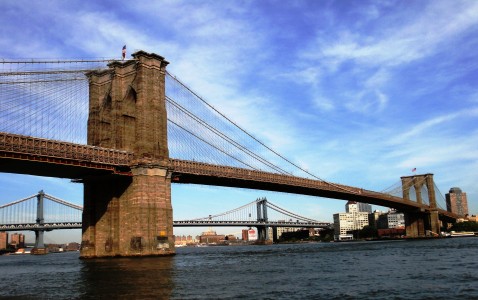 The Brooklyn Bridge from Wikipedia.org

I remember being one of those guys that was worried that Seth Rollins was just going to get buried as the great in ring technician but no personality. His imminent bronzing at WWE HQ is telling me I was wrong to worry. Like, really wrong.

Brock Lesnar & Paul Heyman are first out to the ring though. Heyman naturally gives us video of the tap out and talks out the implications of Taker tapping. I get a big hoot out of Heyman saying he has three hours worth of material. Lesnar wants his re-match with Undertaker tonight. Bo Dallas comes out. We all know this doesn’t end well. The look of amusement on Lesnar’s face after being told “BoLieve” was hilarious. Four German Suplexs before he leaves. Heyman talks him into a fifth. Dallas is a champ. Heyman talks Lesnar into an F5.

The Lucha Dragons are taking on New Day. The Prime Time Players are on the head set again. Why can’t they get regular mic time? It’s so constraining to have these three nimrods feeding you questions. New Day comes to the ring singing their version of “New York! New York!” The first smart thing PTP says is that they’re going to wait for the right time to seek their re-match. Michael Cole calls out JBL for telling the terrible Chief Jay Trombone joke three times. Assisted Big Ending for the win. Awesome, The Dudley Boys are making a run. They trip up Xavier Woods. Take out Kofi & Big E. Both of these guys realize as the crowd goes bananas that they’ve been gone entirely too long in that toilet known as TNA. 3D through a table ends the beating. They scream at the Prime Time Players too.

John Cena hit the 500 mark for patients visited. HHH & Stephanie reveal the statue but hide it from Seth Rollins. He thanks them again. They cheese dick it up. For some reason, I feel like they’re going to pull the rug out from under Rollins.

Roman Reigns & Dean Ambrose are taking on Luke Harper & Bray Wyatt because the WWE realizes they had this finish wrong last night. Ambrose is taking a beating after the break which starts the real action. Reigns takes the  early hot tag. Reigns goes for the Superman Punch. Wyatt counters. Reigns counters into an arm drag. Reigns Jackhammers Wyatt. Harper saves him. Harper gets low bridged. Reigns Superman Punches Wyatt. Reigns goes for the spear when a new member appears. The Mystery Man tosses Reigns across the ring which causes a DQ finish. Ambrose tries to attack but fails. Reigns & Ambrose double team him but they fail. Reigns gets choked out. Mystery Man has a stupid finisher. Ambrose kicks him in the head but it doesn’t faze him. Ambrose gets choked out too. Poor Erick Rowan really pissed somebody off.

The Miz gets to interview Paige, Charlotte & Paige. They talk about themselves as a faction. The WWE is keeping with theme. Charlotte insults The Miz’s relation to her father. They’re her to prove this is the era of the female athlete. The Bellas come out to chants of “We want Sasha.” Even Alicia Fox gets mic time. The Miz ends up telling PCB that they wrestle like girls. Team Bella attacks.

We get the match after the break. Nikki ends up being the one who gets worked over. Charlotte takes out the Bellas outside the ring with a splash. Charlotte is being worked over Nikki after the break. Nikki gets tossed outside the ring. She feigns an injury and catches Charlotte napping. The crowd is really not into this one as they do the wave. Paige gets to clean  house on Alicia Fox. The crowd chants “We are awesome!” The announcers are trying to under play the crowd’s dismissal of this match. Paige locks in the PTO but Brie makes the save. Nikki clocks Paige with a big forearm. Fox hits the Axe Kick for the win.

Stardust ends up kicking King Barrett‘s ass. Neville comes down for the supposed tag match? He kicks Stardust out of the ring then we don’t get a match.

The crowd thanks Jon Stewart for doing what he did. Stewart couldn’t let Ric Flair’s record be broken. Ric Flair comes out. He appreciates the thought but admits that he was pulling for Cena. Flair wants someone he respects to break his record and he respects Cena. John Cena ends up coming down. He is very angry about losing the US Title because he gave people chances to step up. Cena ends up giving an AA to Stewart. The crowd is stunned, even the haters.

Renee Young talks to Cena about the AA on Jon Stewart. Cena tells us that he needs to have a discussion with Seth Rollins tonight. I didn’t mention this in last night’s review but Lana looks terrible but at least they look more like an act. Dolph Ziggler is teaming with Cesaro, Ryback and Randy Orton against Rusev, Kevin Owens, Big Show and Sheamus. Ziggler and his new Hart Foundation pants are getting kicked after the break. Sheamus is in control during the second break. Very slow match so far. Lana attacks Summer Rae which distracts Rusev. Ziggler gets the tag to Cesaro. He throws a beating on Owens. Ryback nails the Meathook on Owens. He goes for Shellshock but Owens shoves him into Big Show. Sheamus & Orton get into the match. Big Show WMDs Sheamus. RKO on Sheamus. Wow, that was quick. Rusev and Owens yell at Big Show. They attack him and leave Sheamus alone. Ziggler super kicks Big Show. Ryback & Cesaro press Big Show into a super RKO. What a bunch of dicks.

Did Bray Wyatt call the new member Ron Brawn? Or Brawn Ron? Speak up, would you? My TV isn’t busted and has decent speakers. Security leads Cena out of the building after confronting HHH & Stephanie.

They are out in the ring with the statue still under wraps. They sing Happy Birthday to Vince first. After giving Seth Rollins many platitudes, he invites Rollins out. He bombs with a Brooklyn slam. Legends never die according to Rollins. He became a legend with the win last night. To be the man, you’ve got to beat the man. Sting is in place of the statue. HHH & Steph act concerned and leave the ring. Sting cleans house on Rollins. Sting holds up the WWE Title. – Kevin