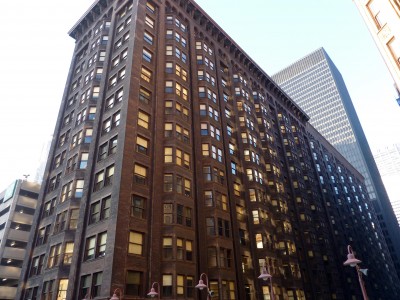 The Monadnock Building from blueprintchicago.org

It’s always a chore to try and do this column when the Pittsburgh Steelers are playing on Monday Night Football. There are frequent breaks but they’re short and there’s a chance that if you go long, you’ll miss something exciting. This game hasn’t been terribly exciting except for my home boy Antonio Gates catching his 100th TD. Not the time I want him to get a milestone in this particular game.

We were treated to the news that Kane is in charge tonight. At least for a while until the Authority arrives. He books a lumber jack match with himself and Seth Rollins. Oh goody. Dean Ambrose rolls into the ring. He’s looking for a fight. Randy Orton answers the call. He breaks the news to him they will be tagging at Hell In A Cell against Luke Harper & Braun Strowman. New Day interrupts them bickering about who’s in charge. Thank you. They talk about all of the people they have taken out recently. After more bragging, New Day lays out something of a challenge. Kane pops up on Titantron. He sends out a referee to make it so.

The match returns with Ambrose in the ring with Kofi. Big E gets a quick tag.  Orton gets a crack at Big E. Ambrose gets a tag back in. Orton & Ambrose end up getting into a who can do it better routine. They return to form to toss Kofi Kingston from the ring for another break. New Day is finally beating down Orton. Big E misses a charge thru the ropes. Ambrose & Kofi come in to battle. Ambrose takes out both Kofi & Big E on the outside with a suicide dive. Xavier Woods distracts Ambrose. It doesn’t matter much as Orton gets in for his own hot tag. I would question the pacing of this match. Orton plants Kofi with the hanging DDT. Ambrose cuts off Big E from attacking. Kofi pushes Orton into Ambrose. Kofi rolls him up for the win.

I’m not even going to pretend like I watched the Taker vs Brock Lesnar video package. Nikki Bella is in the ring against Naomi. The crowd starts chanting “We want Sasha!” Ouch. Brie gets up and starts saying that on the announce table. Sasha dumps her. Naomi is distracted. Forearm followed by a Rack Attack for the win.

Paige steals a Pay Day from Byron Saxton. I needed to catalog that that just happened. I buzz through John Cena‘s always lengthy entrance. He doesn’t really muck around with the challenge this week. Dolph Ziggler answers the challenge. He’s wearing a Kent State Wrestling sweat shirt. Nice. So there was a proposal in the middle of the match? What in the ever loving hell? Ziggler is in control after the break. Ziggler drop kicks Cena going for the Five Knuckle Shuffle. Cena doesn’t miss the second time. Cena reverses a pin attempt into the STF. Ziggler reverses into a sleeper. Cena AAs Ziggler out of the sleeper. Ziggler gets out of a top rope AA. He DDTs Cena but only gets two. Ziggler stomps for the super kick. Cena stops it and clothes lines Ziggler hard. Cena catches Ziggler going for a cross body. Cena goes for an AA but Ziggler turns it into a Fame Asser. Cena goes back to the STF. Dolph makes the slow crawl to the ropes. Cena rolls thru another cross body. Ziggler  rakes the eyes and follows it with a super kick. Two count. Ziggler catches Cena with a head butt. Zig Zag only gets a two. Ziggler runs into an AA for the win.

The Dudley Boyz are taking on The Ascension. Devon starts out against Connor. Victor takes over and keeps up the offense. Bubba Ray gets a hot tag. Victor runs himself into a Doomsday Device. 3D for the quick win.

Neville & Cesaro are taking on King Barrett & Sheamus. Neville starts out against Barrett. Cesaro and Sheamus go at it after. It’s always enjoyable to watch them beat on each other. Neville acts as a Tyson Kidd replacement. Barrett hits Neville with a Bull Hammer from the outside. Sheamus pins him for the win. I feel bad for all four.

Roman Reigns repeats why he hates Bray Wyatt while the crowd “What?” him. It is just a history which isn’t needed. Couldn’t we have given the last match at least one of these minutes? The crowd starts a faint “Boring” cheer. Reigns loves his daughter. He makes a bad analogy. Reigns is rattled after the chants. Bray Wyatt wonders who Reigns is trying to convince. Wyatt brought this problem to himself. Reigns tries to play tough again.

Braun Strowman is taking on Roman Reigns. Strowman uses his size to keep Reigns athleticism ineffective. To say this offense is plodding is an under statement. A jaw jacker gets Reigns an opening. Reigns stays on the offensive. A Samoan Drop does his back in. Reigns catches Strowman with a barrage of rights from the outside. Drive By one connects. Drive By two turns into a clothes line by Strowman. Superman Punch on the outside. Reigns bounces his head off the announce table. Luke Harper gets Superman Punched. Reigns does likewise to Strowman. Reigns wins by count out. The Wyatt Family surrounds the ring. Reigns gets out. HHH maybe learns that Kane is taking on Seth Rollins in the main event tonight.

We get a replay of Summer Rae wanting to marry Rusev. Michael Cole mentions the TMZ story about Lana & Rusev being engaged. Summer is at ring side for some reason. Ryback is his opponent. I just noticed Ryback’s tights. I’ll just leave it at that. Meat Hook clothes line. Rusev gets out of a Shell Shock. Rusev tries to use the ropes for a pin attempt. Rusev conks himself on the post after a missed splash. Shell Shock by Ryback for the win. Poor Ru, Ru. Summer Rae gets to reveal the story from TMZ. She calls him a whipped little boy. She slaps him. The end of one of the worst story lines ever.

Kalisto gets some singles time against Kevin Owens. Owens takes his eyes off Kalisto to yap at Michael Cole. Owens is working the ground the flyer offense. Kalisto hits a tornado DDT for a near fall. Owens with a traditional power bomb for the win. Owens yaps at Cole more.

Becky Lynch & Charlotte are taking on Brie Bella & Alicia Fox. Paige is on the head set. She wants Natalya to be in the back. Paige tries to convince us that she’s using tough love on Becky & Charlotte. Spear by Charlotte. Brie rolls up Charlotte. Natalya tries to help Charlotte but  Paige interferes. Missile Drop Kick by Brie for the win.

Seth Rollins asks for Big Show‘s help. He laughs at Rollins and leaves. Kane isn’t Rollins opponent any more. Seth Rollins opponent ends up being Demon Kane. Oh you sly dog you, Kane. I’m quite amused by Rollins trying to high tail it out of ring side. Kane ends up getting into it with a bunch of lumber jacks. Big Show has a show down with him. Kane clocks him so Big Show hits him with the WMD. Kane is thrown inside by New Day. Rollins catches Kane with the top rope knee to the head. Rollins connects with a frog splash but only gets two. No one is surprised when the lumber jacks finally brawl. Kane sits up when Big E goes for a splash. The brawl starts all over again. Rollins flips out of a choke slam but ends up getting Tombstoned for the win. – Kevin