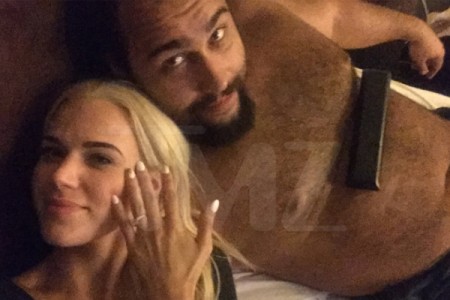 Can you tell that TMZ water marked this image? You can’t tell that I saved it from nesn.com.

Kevin: Back to back days of 5 hours of sleep. Haven’t done that in a while.

Jeremy: I am sorry you stayed up for Raw. I quit very early. Terrible show.

Kevin: I’m starting to think it’s way better to watch not live. I got thru that thing with a quickness and didn’t mind too much.
Jeremy: The logic of the entire show was just terrible. They show all of the praise of the women’s match then immediately follow with that substandard shitfest. I gave up around then. Checked back in but Fargo was on then fell asleep. Reading the reviews, I didn’t miss anything.
Kevin: The women are being treated about as poorly as possible. The continued gulf between presentation on WWE TV and on NXT is amazing.
Jeremy: Yes and they highlight that very issue in one segment. How the top guy doesn’t see this is infuriating. WWE is for a wider audience obviously but there is no excuse for the booking of the women.
Kevin: That’s the reason they should be booked better. I just sat there and laughed that their segments were really short and it was the same catty BS instead of being a real issue.
Jeremy: When Brie started chanting “We Want Sasha” just the hate i felt. Do you think any of the women have the guts to say no? No this is not good. No this doesn’t work. No this makes no sense. No this goes against what we are trying to get over with the audience…errr….WWE universe.
Kevin: I actually didn’t mind that part with Brie because they’re the heels trying to cling to their fame because of vapidness so she should be upset that a good wrestler is getting cheered.
Jeremy: Is that what she was gong for? I thought it was just a sorry excuse for another distraction ending.
Kevin: I don’t know what the thinking was but that’s what I projected onto it. The moment did lead to another distraction finish, which is not needed. Nikki is supposed to be strong going against Charlotte for a chance to get her belt back, have her win clean. Naomi is near the bottom of the totem pole now, she can take the loss.
Jeremy: Poor Naomi. I don’t get her fall at all.
Kevin: She’s kind of sloppy in the ring but I would be interested to see her on an extended run. Or at least a consistent one.
Jeremy: Yes consistency would be nice. Hard to improve with 4 minute matches full of shenanigans. Did they mention the Divas Revolution at all?
Kevin: Paige did mention that she was mad because she started the Revolution but I think that was the only reference. So at least one of the dumb story lines may go away. Too bad it makes Paige a waffling idiot again.
Jeremy: Also points out the fact that it wasn’t much of a revolution.
Kevin: It’s a revolution in name only. I did want to get back to your other earlier point, the logic of the show. I’ve got to admit that the phone breaking up on me his happening less and less. Also, since Kane’s job is on the line at HIAC, shouldn’t you have a temporary replacement since his decision making might not be the best the next few weeks?
Jeremy: Excellent point and the answer us yes there should be. Then we run in tot the issue of yet another figurehead character just babbling away. Unless it was John Laurintis. I would support that for a short term fill in.
Kevin: He’s best in small doses. I could handle that. The WWE doesn’t do small doses well though.
Jeremy: No, as soon as something is “funny” they keep them around and kill it. Kind of like taking your opponent seriously during a match, So seriously in fact you stop the match to point out someone proposed in the crowd. Twice i may add.
Kevin: I don’t want to marry the woman that says yes to a proposal at a WWE event as a match is going on. Ziggler was dumb enough not to take advantage of the break provided by John Cena even though he did heelish things the whole match.
Jeremy: as soon as Cena got on mic he should have attacked or attempted a roll up. Instead he stewed in the corner like a chump. You gotta admit though the guy and girl did look pretty happy. Dude was jumping up and down celebrating. So, I am not hating on them. So, um, the Rusev/Ziggler angle. Um, didn’t you expect Rusev to come out and ruin it for Dolph? Dolph appears to be on the way to victory, which I know is hilarious since it is Cena on free TV so he ain’t losing, and then Rusev interrupts?
Kevin: I wasn’t expecting that actually. I’ve got no idea how you get from the angle they were at to admitting that Lana & Rusev are engaged. Shouldn’t Ziggler have expressed some dismay? Been upset that his woman left him? Maybe had the announcers say his heelish moves were because Lana left him?
Jeremy: I expected it based off of Rusev needing gold around his waist form last week so then he could get engaged to Summer. Dolph did address it backstage on WWE.com. Ziggler said its cool. um, what? The entire thing is a mess and not handled in anyway correctly. why not have Rusev deny it to Summer and “put her in her place?” It could have been another Ziggler thing? Or at worst Lana comes back , costs Ziggler the match and then they laugh at both of them? SO frustrating.
Kevin: We can only hope that this brings one of the worst angles in WWE history to an end. There was any number of ways to go with this angle and they choose the bad ones at every single chance.
Jeremy: Rather fitting for this time in WWE history.
Tweet