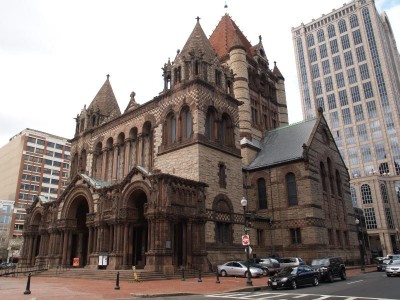 Trinity Church in Boston from foundationsofamerica.com

We get recap of the Seth Rollins/Kane situation. Brock Lesnar comes out with Paul Heyman. We then get recap of Brock Lesnar beating Big Show at MSG. After Heyman tells us that Lesnar is going to make the Devil’s Playground called Hell In a Cell will become the Beast’s Hunting Ground. We then get another recap of Lesnar vs Taker. Heyman talks again. Next video package. Heyman promises this will be the last match between Lesnar and Taker. They’ve stretched this one to the limit any way. Big Show comes down so that those of us who didn’t watch the special can watch his ass get kicked. Lesnar blows off the hand shake gesture. Show gets pissed about it and throws down the Punk Card. Seth Rollins is mad about having to possibly wrestle the Dudleyz alone. For those of us who only watched Smackdown, why wouldn’t he pick New Day? They had a smashing time.

The New Shield (Randy Orton, Dean Ambrose & Roman Reigns) are taking on The Wyatt Family. Nothing much happens before a very quick commercial cut. Crazy Dean Ambrose hasn’t learned his lesson about jumping at Braun Strowman. Everyone talks about the power of Strowman while forgetting that Brock Lesnar just tossed around Big Show. Ambrose starts taking the beat down. Strowman misses a corner charge. Orton gets a hot tag. Strowman ends his hotness. Reigns gets a quick tag. Ambrose nails a suicide dive on Strowman while he attacks Reigns. Harper gets distracted by his own guys brawling. RKO by Orton. Reigns follows with a spear for the win. Reigns tells us that he’s going to end the feud at HIAC.

Sheamus runs down Neville. He gets to do his gimmick when he came back again. King Barrett leaves the commentary desk and distracts Neville. Brogue Kick for the win. At least Neville has moved on from Stardust?

Kane tries to appoint himself as Rollins partner tonight. Seth Rollins rejects the idea. After some threatening from both parties, Stephanie McMahon comes out. She makes the match with Kane involved. Corporate Kane gets fired if he losses to Rollins at HIAC.

HHH advises Seth Rollins. It seems he wants Rollins to take out Kane before the opposite happens. Natalya is wrestling Paige. She catches Natty with a super kick to turn the tide. The head set issues for the announce crew is not helping an already poor product. Paige applies Eric Nelson’s favorite move, the abdominal stretch. Natty dodges a charge. She goes on extended offense including some new moves. Natty applies a Sharpshooter. Paige gets the rope break. Natty applies it again. Paige taps out. Paige is the only one who has any clout in the division so she keeps losing. She will lose said clout quickly if it keeps happening. Ryback gets a video package. Ryback is a lion and Kevin Owens is his prey. I dig this Ryback more. Slightly heelish promo.

Kevin Owens is taking on Sin Cara. Owens dominates early. Owens talks trash to Kalisto. Sin Cara takes advantage for a moment. Pop Up Power Bomb for the quick win. Owens attacks Kalisto after the match. Ryback makes the save. New Day starts trying to sweeten up Stephanie when she bites back. She makes a match at HIAC for New Day & the Dudleyz.

Kane & Seth Rollins are taking on the Dudley Boyz tonight. Kane tries to start out but his ankle is too much of a problem. Bubba ends up facing off against Rollins. Kane is working over Devon when we get back from a break. Rollins comes back in after Kane re-injures his ankle. Rollins handcuffs Kane to the ropes. Rollins gets tossed into Kane. He falls off the apron and breaks the handcuff links. Kane gets taken to the back by the doctor. Rollins watches in dismay as Kane exits. Devon gets out of a Pedigree. Bubba gets a hot tag. Wassup. Get the tables! Rollins drops kicks the Dudleyz. Demon Kane comes out. The Dudleyz hit the 3D on Kane as revenge for their Smackdown beatdown. Rollins almost leaves ring side but decides to slide the table into the ring. Kane was playing possum. He ends up choke slamming Rollins thru the table.

Team Bella happens to arrive right before Team BAD. So that means they have a match. Sasha Banks continues to be the leader of BAD. Nikki Bella has a microphone now. They are going sports heavy on the disses tonight. They even have different breast cancer awareness shirts. I have to laugh when the announcers say that “WWE.com had break news” which of coursewas about the WWE. The announcers also try to tell us that we should respect these ladies because of stuff we won’t see on WWE TV not on the Network. Alicia Fox is wearing down Naomi after the break. JBL then emphasizes the teams breaking up instead of how good the women are in the ring. Granted, he does this for the men too. Sasha gets the hot tag. Michael Cole, we haven’t seen enough of Sasha to discuss her tactics in the ring. Bank Statement for the submission win. Renee Young wonders if Charlotte will be focused in her match with all the hoopla going on. Charlotte says she’ll show she deserved the win.

Summer Rae is in the ring. She introduces Rusev. She gives us a video package. Rusev still likes her. Summer then asks Rusev to marry her. After playing bashful, he says yes but not yet. He needs gold around his waist for her to have gold around her finger.

John Cena comes out to await his challenger. It was supposed to be Dolph Ziggler. He comes out being dragging by New Day. They end up nominating Big E as his challenger. Big E shows off the power going into the break. Big E is hitting Cena with everything he’s got. Big E misses a corner charge. Big E continues the assault for the most part though. Big E keeps going for pins but none are successful. Belly to Back Suplex type thing. You Can’t See Me! Kofi & Xavier Woods distract Cena. Big E tries to hit Cena with the trombone while Charles Robinson tosses the other two. Cena dodges it. Robinson grabs the trombone. AA for the win. Kofi & Woods attack. Dolph Ziggler tries to make the save. Ziggler accidentally super kicks Cena. New Day eliminates him. The Dudleyz come out for another save. New Day dispatches of them too. New Day is stepping up in every way you can ask. – Kevin