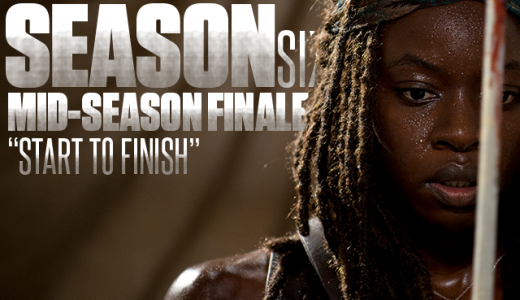 Saved from thewalkingdead.com. I’m sure Gene Bell was involved along with AMC.

Kevin: I think we got the answer to why The Walking Dead mid-season finale was only an hour, because the material sucked.

Jeremy: What? How dare you. Look at all that happened. Logic got totally tossed out the window. Character motivation changed out of blue. Commercials galore. What a great waste of an hour.

Kevin: I’m so glad I finished watching the Crew move on t the MLS Cup first. At least the lone Wolf maintained his motivations.

Jeremy: No he didn’t man. His sole reasoning has been he is going to kill people. So he takes a hostage and runs out the door? What the fuck? Also, when did Tara or Rosita become a terrible shot. Weren’t they both scoping walkers in the head form a far distance? Couldn’t they do the same thing for the Wolve?

Kevin: He was out manned so I don’t blame him for wanting to get out of the situation. But I was thinking the same thing about Tara & Rosita. A bullet is going to go faster than the Wolf could react and cut Denise’s throat.

Jeremy: The entire episode was bad. it started off in a totally confusing manner. how did everyone get hurt? Rick was cut up, Maggie has a cut on her leg and is limping, How the hell did they get hurt? Was there a scene missing? It was fake tension for me as it made no sense.

Kevin: And was the cookie that Sam left out just a metaphor for the incoming zombie horde? I was thinking something more would come of that little scene but I don’t think it did. I have no idea how everyone got hurt to answer your question. Missing scene is the best explanation.
Jeremy: Yeah real subtle on that one. Of all the times there should have been an extended episode this was one of them. Nothing was fleshed out and the commercial breaks every ten minutes, yes I kept track, killed any momentum.

Kevin: Ha. I hadn’t thought about the commercials but the show did seem to move more quickly than normal. Evenly distributing everything will do that.

Jeremy: One thing I did enjoy was the call back to Glenn surviving the prison by climbing the scaffolding.Then having Maggie do something similar and then shoot it the same way I enjoyed. It made no sense she had a leg injury but I did like that. Considering the Greene family statistics with season and mid-season finales there was a reasonable amount of stress there.