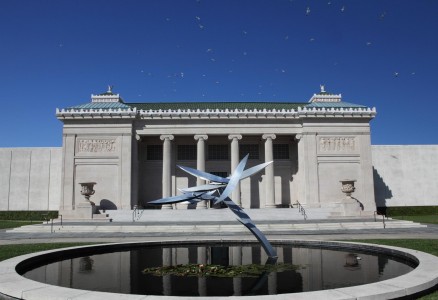 The New Orleans Museum of Art saved from arteducators.com

We start with a sighting of Damien Sandow among those on stage. Stephanie and Vince McMahon are the first to get the mic. They explain the Royal Rumble. They also mention a few people who “could” win the Rumble, all of which don’t stand a lick of a chance. I’m bored to tears until Roman Reigns shows up. He wants to know what happens when he wins. They give him a match against half of the roster?

Sheamus attacks Dean Ambrose from behind. We’re supposed to think the Authority is evil. I’m just not getting that vibe. Sheamus is in control for a decent stretch after the break. Sheamus slams Ambrose on the announcer’s desk. He then works over Ambrose’s back in the ring. Ambrose finally turns things around. The Ambrose Asylum is open for business. Jeremy is so not going to record after hearing that line. Sheamus was back in control after the second break. Ambrose turns it around with a Tornado DDT. He catches Sheamus with the weird top rope elbow. Both are slow to recover. Ambrose ends up connecting with the sling shot clothes line. Ambrose gets caught going for another suicide dive. Sheamus tosses Ambrose into the barricade in multiple locations. Ambrose reverses Sheamus and tosses him into the post. Ambrose repeatedly slams his head into the post. The referee only counts them out. Ambrose continues to flip out. Kevin Owens attacks from behind. I just can’t see this feud going well for Owens so I wished they didn’t push this issue.

Vince & Stephanie run into Paul Heyman. The match up blows Heyman’s mind. (Hint, it doesn’t blow his mind, in the least.) Brock Lesnar wants to fight for the Title at Wrestlemania. They go somewhere private.

Titus O’Neil and Stardust have a match. I’m thrown off the action by JBL discussing the possibility that Stardust could become Albert Einstein or Stephen Hawking. My brains hurts. The crowd is dead for this match. No one has any reason to take these guys seriously. Stardust tries to put O’Neil away with a side effect. Clash of the Titus for the win after a David Bowie reference. Stardust attacks O’Neil while he celebrates.

Chris Jericho gets to blow himself. Jericho then says he’s going to be seven time champ at the Royal Rumble. I was ignoring him hence I missed him wearing a suit jack, scarf and no shirt. He starts Rooti Totti Booty. Not one of New Day‘s better promos. The Usos interrupt. The crowd does get some hand gesture they do on the way down to the ring. My Little Pony Jabroni’s is much better than Rooti Tooti Booty.

The Usos are taking on Kofi Kingston & Big E with Jericho & Woods still at ring side. The action goes back and forth. The first interesting moment is when Jericho chases Woods to the back. He’s back at ring side. Kofi is working over Jimmy. He tries to get out of a precarious situation. Big E pulls Jey off the apron so Jimmy can’t tag. Kofi misses Trouble in Paradise. Enziguri gets him an opening. Jey gets the hot tag. He almost over shot Kofi & Big E. Jey runs into Big E. Bad plan. Super kick on Big E. Kofi tags in. He gets super kicked too. Jey gets crotched on the top ropes. Jericho breaks Woods’s trombone over his knee. Woods starts crying. Kofi is distracted. Jey rolls him up for the win.

For some reason, even though Steph invited them into the room for privacy, there are cameras now. Paul Heyman tells Steph that Lesnar won’t be in the match. She , by way of Vince, tells Heyman that Brock is in the match. Heyman smiles and tells her that he’ll do her a favor.

If you live under a rock, Sting is the first inductee into the WWE Hall of Fame. They had a very good video package for him.

The Wyatts gets interrupted by the Social Outcasts. They end up having an eight man match. Adam Rose starts against Braun Strowman. Bo Dallas comes in quickly. Curtis Axel takes a crack. Ryback attacks the Wyatts for a DQ, I suppose.

Kalisto gets a shot at the US Title against ADR. He is pumped because the belt stands for opportunity. Kalisto is ready to emulate famous Latino champions of the past like Eddie Guerrero and Rey Mysterio. Alberto Del Rio isn’t like one of them.

JBL is saying Alberto Del Rio is the one who sent John Cena packing then says he would have been the player of the year ten times in a row. ADR continues the Cena injury angle. He’s going to break Kalisto tonight. Del Rio gets the early jump on Kalisto. Del Rio plants Kalisto with a sitting power bomb after a huracanrana attempt. Kalisto gets getting short lived hope spots. Kalisto gets an opening with a head scissors. Del Rio side steps a suicide dive to toss Kalisto into the barrier. How that’s a commercial break is a head scratcher. I mean, Del Rio should toss him back in the ring for an easy pin, right? Right? Kalisto keeps fighting. Del Rio made a suplex look rough. Kalisto crotches Del Rio. He gives ADR a huracanrana off the top rope. Kalisto rolled through on a kick to administer a rolling kick. Kalisto is super slick in the ring. ADR gives him a reverse suplex. ADR puts Kalisto in a Tree of Woe. ADR goes for his dumb finisher. Kalisto dodges and gives him the spike huracanrana. ADR goes for a suplex. Kalisto rolls him up for the win. Kalisto is your new US Champion. Wow, I’m surprised. ADR could be in for a larger prize though. We shall see.

Jojo interviews Charlotte and Ric Flair. She wonders why people are questioning her. She isn’t the bad guy. Becky Lynch is.

Brie Bella comes out with Alicia Fox. Charlotte comes out with Ric Flair. I’m really enjoying the at least ten year old picture of Flair they’re using for the Stone Cold Podcast. Becky Lynch attacks. Charlotte turtles. Ric Flair comes in and cancels the match after the attack. This crowd is not helping anyone tonight. I’m really expecting a quiet atmosphere next week.

Becky Lynch is fine with being on her own. She made Charlotte tap out once and she’ll do it again. Good stuff from her.

Roman Reigns ends up facing the heel roster. Kevin Owens is the first to look bad. Surprisingly, he gets to beat down Reigns in fairly short order. I didn’t know a neck breaker was in Reigns arsenal. It needs some work. Owens tosses Reigns to the outside. Am I allowed to feel like this is strange but still be happy about it? The WWE almost never does a multi-person match well. Reigns starts to finally take over on Owens. Reigns keeps staring down the McMahons. Reigns takes out several of the lesser Superstars easily. Everyone attacks Reigns. Brock Lesnar’s music hits. He destroys New Day, Sheamus and Alberto Del Rio. Lesnar drags Reigns out into the middle of the ring. He then gives Reigns and F5. Fun finish. The crowd still seems unimpressed. – Kevin