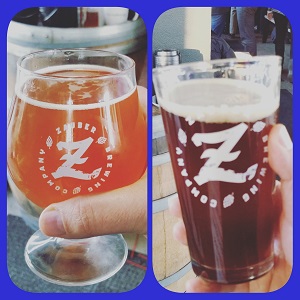 As planned, I stopped in at Zauber Brewing right around 4:00 PM. I thought I only had about an hour and a half to consume beers which meant two best best. I really wish I had know that the 6:00 PM for New Wrestling Ohio was for door opening and not start of event. It would have allowed me an extra beverage. Here is what I tried at their Two Year Taproom Anniversary.

Shoulder Devil Golden Strong Ale – I ordered Wunderland but after looking at my picture and the description, I’m quite positive I was given Shoulder Devil unless a dark ale suddenly became a completely golden orange. Considering that I’ve had Wunderland under it’s former name Xmas, I am completely fine with this mistake. As usual, I started with the lower IBU beer to avoid any hops killing bitterness even with this mistake. It checks in at 35 IBU which is higher than I expected. The hops used must be pretty mellow though because they don’t come to the fore front. That is one of the things I do rather enjoy about this brewery though is that a lot of their beers aren’t too hop forward. Speaking of which…

Bruzer – The new beer of the two year Taproom anniversary was an Imperial version of their Belgian IPA Berzerker. While I think Berzerker is mellow in the hops department even at 60 IBU, the hops hit you more forcefully in Bruzer despite a modest raise to 70 IBU. So I would have to say this new beer is one of their more hop forward beers. The beer obviously hits hard since it’s an Imperial version. The raise in ABV is larger going from 6.3% to 9.5%. It’s a good beverage and a good way to celebrate two years. Now I wonder if they’ll brew a tripel for the three year anniversary. 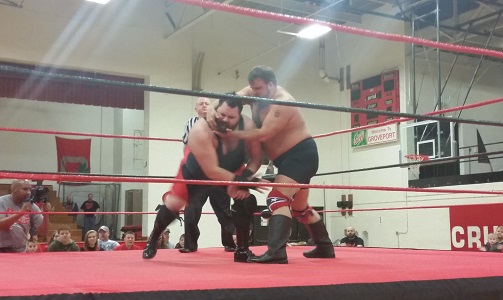 “The Appalachian Outlaw” Jock Samson vs Bryan Castle – I have liked Castle’s work since back in his days in Prime Wrestling. I have seen Samson advertised for Absolutely Intense Wrestling in Cleveland. Though I haven’t seen any of his work, I was not surprised by his quality. He got the boos and cheated to win. Both men played their roles perfectly.

Graham Wellington & Onyx vs “The Stretcher” James Avery & “The Professional” Brandon Fields – Onyx was over big with the crowd in attendance. He was a very large and well built gentleman. So it was not much of a surprise Wellington took most of the beat down from Avery & Fields. Onyx cleaned house and got the victory for his team.

“No Shame” Jimmy Shane vs Sless Taylor – Taylor had the most athletic ability on this card in my opinion so I find it interesting that he lost this match to Shane, who seems like the less important of the duo of himself and Robby Starr. Taylor also lost at the the first NOW show so something must be holding him back from better showings that I don’t know about. At this point, I joked with The Wife that NOW knows how to book better than the WWE since they already had two heels go over on the card.

“True Grit” Bruce Grey vs Ron Mathis – Mathis was the heel in this match up and he showed it in how he won. A low blow while the referee was looking the other way led to Mathis’s patented DDT for the win.

Jeff “Big Guns” Cannon vs Joshua Singh – I was born in Pittsburgh so I wasn’t about to boo Cannon but a lot of fans did. As many Pittsburgh fans are in the area (it’s a lot, trust me) one should never book the Pittsburgh guy as the good guy in a match. Not only was Cannon booked as the good guy, but he was also booked as the victor in this match. Always nice to get a good guy win after an intermission to get the crowd back into the action.

“Darkstar” Matt Taylor vs “Agent Orange” Juice Jennings – My favorite part of this match may have been Jennings shirt. It looked like a nutritional label but had all of his wrestling statistics on it. Very clever use of a common thing always gets my interest. It was a well wrestled match that ended up seeing Taylor win by submission. Taylor was probably had the second biggest crowd reaction of the night.

“The Handlebar Haberdasher” Marion Fontaine vs Robby “Super” Starr – I have seen Fontaine wrestle for quite  while now too since he was in Pro Wrestling Ohio & Prime Wrestling. I was quite amused by the fans behind us not knowing whether to get behind him despite the fact that he was the face in this match. Starr did a good job of heeling it up while his partner in crime Jimmy Shane did the same on the outside. Shane slid a chain inside the ring for Starr to use but some “fans” notified the referee of the transgression. The referee re-started the match with the outcome going in Fontaine’s direction in a pin fall victory.

All in all, a fun night out. Hopefully I can be there with NOW 3 happens. – Kevin