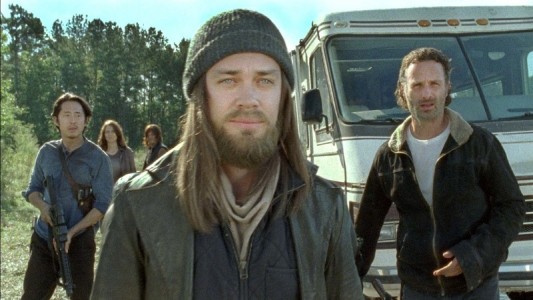 Kevin: So, did Jesus just make a deal with the Devil?

Jeremy: Oh no. It sounds to me like Jesus turned the other cheek already.

Kevin: He’s used to turning cheeks whether it’s for Rick & the crew or Negan & his crew.

Jeremy: It appears it may be the best choice. The borderline arrogance and over confidence showed at the end of the episode was a head scratcher. Um, people are going to die big time.

Kevin: I didn’t quite get being that cocky about the situation. You’ve had numerous people die in these past battles. Why do you think you’re going to be unscathed this time? I also feel like this is the first time they’ve gone on the offensive without being provoked. I know Daryl, Abraham & Sasha had a small run in with Negan’s crew but he hasn’t been a thorn in their sides like The Governor.

Jeremy: Good point. They will have the element of surprise I suppose but knowing this show something is going to go terribly wrong. More of the decision is going to come next week based off of the preview. It makes sense to go on offensive since Negans crew is clearly getting closer to Alexandria. It didn’t seem like Hilltop was all that far.

Kevin: Considering they got to it in a day, I would imagine it’s pretty close. Really, nothing ever seems too far away when they travel. I am interested to see what Rick & Company does with the element of surprise.

Jeremy: Having transportation and no laws of the road will definitely help in that regard. Rick and Co have the guns and the element of surprise but the Saviors had guns as well. Rick and Co also have no idea how many people they are going up against.

Kevin: In the preview, they already looked like they were ready to go in, I hope they’re not that bone headed. Aside from that main plot point, a lot of things seemed to revolve around Abraham.

Jeremy: The opening scene with Sasha and him really made me think he was a goner. They killed of Tyreese out of the blue so I was wondering if Abraham was done. It added suspense for me at least when they were searching for the missing Hilltop people.

Kevin: I never thought he was a goner but I did expect something to go wrong during the search/crash. Whether it was Negan’s crew being a problem or the dreaded zombie out of nowhere. I was more concerned for him though when they had the small skirmish in Hilltop. Abraham spacing out during the attack made me think it even more.

Jeremy: See I didn’t think he spaced out as much as allowed himself to get to the brink of death. He had just heard about how everything was clear right before dying. He hasn’t been overpowered at any time on the show but this guy was able to do it? Abraham, the odd bird he is, did it on purpose. Now if it was the guy Rick stabbed int he throat then I would say ok. I am guessing Abraham saw Sasha and not Rosita. Still not sure why he has to make a choice. Talk your way in to something fun man.

Kevin: I’m not sure Sasha was available to be talked into anything since she was the one to, for lack of better wording, break things off. It did make me wonder why Abraham wasn’t doing watch with Rosita.

Jeremy: We were never given a sense of time they have been on watch together. I guess about the same time they got back? It seems strange to get in to all of these different romantic relationships but it makes sense. Finally some downtime and its time to get the freak on.

Kevin: I think Abraham was trying to grapple with part of the mentality when talking to Glenn about having a child. There’s always this conundrum hanging over the show “Will things ever get normal again or should we all just kill ourselves to avoid being zombies?”

Jeremy: Bet the next time you use Bisquick you may pause first. I was disappointed he didn’t ask” Who’s Gregory?” Seems like there was a perfect spot for that. I did enjoy his reaction as Rick and Michonne told them all to stand down on Jesus. A bit of bewilderment and acceptance.

Kevin: Good thing I don’t use Bisquick. I enjoyed that analogy was his version of trying to be discreet. Lunk head Glenn doesn’t even understand it at first. Abraham isn’t going to have a problem with any type of assault plan even if it is bone headed.

Jeremy: They definitely have the arsenal for an attack but they are at the mercy of the Hilltopper to point out Negan and not give them up in the process. It is a serious threat as he may do it out of self preservation and possibly to get in good with Negan and the Saviors.

Kevin: I honestly hadn’t thought about the possibility of a double cross. After Jesus noting that they are taking more than Negan though, it certainly is a possibility.

Jeremy: I don’t think Jesus would as he seems to smart. The other guy, I cannot remember his name, is the one I would be worried about. Jesus had the opportunity to just beat it instead of sitting around watching Michonne and Rick get it on. Speaking of Rick, he delivered yet another great scene and also kept with the theme no new colony or place is safe from him.

Kevin: Gregory is the figure head of Hilltop. Jesus seems like he’s the brains of the operation though. I did find it interesting that they’re letting Maggie have a similar role for their group.

Jeremy: Well she was the de facto second hand for Deanna after a while as well as spokesperson for the group when Rick was all nutso. The quick explanation form Rick why she should be doing negotiations was funny and fitting. Especially since he stabbed a guy in the neck and shrugged it off with a “What?”

Kevin: I love that is Rick’s response when killing someone in front of people who haven’t seen much murder. He had the same response in Alexandria. Luckily, he collected himself better this time around instead of going full freak out.

Jeremy: I looked it up and that was a scene straight form the comic including reaction. Pretty bad ass way to introduce yourself and your world view.

Kevin: Ha. I did read a little bit about TWD this morning and they mentioned that this story line is sticking very close to the comics. Insert note about me not having read the comics.

Jeremy: Right, the Michonne/Rick dynamic is not in there but the rest apparently is very close. Does that include Rick telling Carl that he rubbed one with Michonne? Seemed a bit inappropriate.

Kevin: Well, it was hard to avoid since Rick was buckling his pants and Michonne was half naked when Carl confronted Jesus. I think the strangest part of that segment was Carl’s reaction to the news. He had a look of “You go dad.”

Jeremy: Carl is at that age that he knows what’s up. His only choice is Enid for the time being and he knows what a pain she is already. Gotta be rough for the kid.

Kevin: I remember being that age but I wasn’t ready to high five my dad after I heard some creaking in the bed room.

Jeremy: I don’t know if I want to continue right now with that image.

Kevin: Glad I could bring this conversation to a screeching halt. Maybe I can jump start it by bringing up Abraham losing his necklace from Rosita. Bad sign for her or him?

Jeremy: Bad sign for their hooks up I believe. Not the most subtle way of foreshadowing.

Kevin: You don’t think one of them gets knocked off during the upcoming skirmish? I know it’s pretty hit you over the head obvious.

Jeremy: It seemed more like foreshadowing of their relationship. Does that mean death for one of them? Maybe it could but I think in the context of the scene it means he is dumping Rosita. Why? I don’t know.

Kevin: After their bedroom scene, she seems like a real trooper in more ways than one.

Jeremy: In the world they occupy are long term relationships all that smart?

Kevin: No, because even though Jesus’s group seemed like a group that could help stabilize the zombie apocalypse world, the main narrative at the end of the episode was more killing other humans. You need something of a stable world for long term relationships.

Jeremy: So in the meantime just bump it out and carry along surviving.