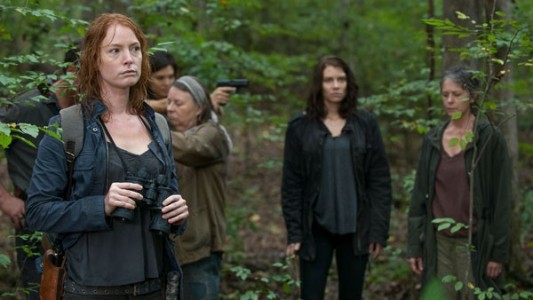 Saved from TV.com but licensed by AMC.com and Gene Page.

Kevin: So, are you ready for the fun that is The Walking Dead conversation?

Kevin: Ha. I barely got you to talk about her last week. You were far more worried about moral implications. Last night blew those implications straight off.

Jeremy: OK, so main question was Carol really going through all of those emotions or was it that elaborate? It sure seemed like a plan and when she executed ‘Chelle it was old Carol. But then she fell right back to the scared Carol near immediately.

Kevin: It’s hard to say. Evidence points to Carol having some sort of a change to me from previous episodes. It could be why she wanted to keep Morgan around. She wasn’t strong enough to go moral on everyone but if Carol has someone else stand up with her, she’s willing to do so.

Jeremy: So is this a regression for her then? She had come so far along or was that all an act? Was it all self preservation and now that Alexandria has given her comfort has she softened? She is clearly the most fascinating character on the show now.

Kevin: I don’t know if it’s a regression. Maybe she is just tired of killing living people? Carol seemed fine killing Wolves not long ago and zombies at the beginning of last week’s episode. It’s hard to say without really getting much of an answer out of her. I thought her whole rosary clutching was an act until the end scene.

Jeremy: I was trying to go back to the beginning of the series for her stance on faith. Was she praying for Sophia’s return? the show was completely different then but I would think that would have stuck out. the way the series has gone since there has been little time for those moments. I will say this, murderous Carol was way sexier than timid Carol.

Kevin: I don’t think she prayed for it on screen. She was hoping for it for sure. The show has gotten even more grim since that time. Not that people thought it was a good idea for Lori to get pregnant, but people were more harsh on Maggie. I think that aspect is weighing on Carol too. It may be connected to her losing Sophia.

Jeremy: I am with the other people. Getting preggers in a Zombie Apocalypse with no access to healthcare seems silly. But then she did point out it had been done for quite a long time before modern medicine. I think on Carols position having been a mother she still has that motherly instinct or obligation. So when she see Maggie out there in the danger instead of back in Alexandria shes angry at Maggie for taking it for granted or being so flippant when it comes to the danger.

Kevin: I do think that’s Carol’s thinking but Maggie just isn’t buying it. Carol’s concern to me was the bigger problem on Negan’s gang getting a jump on them. If Carol had just been worried about the mission, like Maggie, the kidnapping may not have happened at all. Maggie was ready to take people out to ensure her safety. Maggie isn’t about ready to have a conversion like Carol.

Jeremy: I believe this is where Morgans views are coming in to play with her. Before he got there she was perfectly fine with the way things were going  on the surface at least. The downtime as well,  getting any sense of normalcy has to take the edge off. Maggie said her pregnancy is about two months and hat will give a person some time for reflection.

Kevin: It’s all a bunch of guess work about Carol’s state of mind. They haven’t featured her much but she has been around Morgan more than anyone not named Rick. It does make her very intriguing though since none of it has been explained.

Jeremy: Also her hookup with Tobin make you think she has something else going on. Well, if they did go at it I suppose. They never made that clear.

Kevin: Carol’s having a child too! They have enough baby intrigue, I hope there isn’t more.

Jeremy: A preggo Maggie and a baby in Alexandria is all the toddlers the show needs. I was impressed with Maggie’s zeal for getting business done.

Kevin: It does appear as if they could have a good working relationship with Hilltop and things had been pretty quiet in Alexandria after the Wolves attack so I can understand her view that if they take out Negan’s gang, they’re good to start rebuilding some semblance of a functioning society instead of a zombie-fied Wild West.

Jeremy: It was nice seeing people just take care of walkers instead of letting them carry on or make it dramatic. Of course using them as a diversion is also a nice tactic.

Kevin: I knew you’d appreciate that part. Even Negan’s gang was no nonsense about killing walkers. It must have been a bit tricky to set up that trap up just because it was possible to get bitten.

Jeremy: Especially when impaled. makes it easy for a walker to chew the cheeks. One thing about the Saviors this episode, outside of the guy, was how vulnerable they all eventually let on. ‘Chelle had the story of her father, the chain smoker had her medical problems and Paula with her psycho story about her boss and job. Even by this shows standards they were seemingly sympathetic. Yes, I realize they were supposedly the bad guys in our eyes but ‘Chelle even mentioned they were the good guys and Carol and the group were the bad guys. So all they are doing is surviving as well.

Kevin: Alicia Witt aka Paula has cracked me up in her last two roles that I’ve seen. Before this, she was on Justified. Too bad her character isn’t going to be around for a similar amount of time on TWD. They definitely seemed at least as sympathetic as the Group which did make things even more awkward when Carol & Maggie pulled off the old Dutch Oven with the rescuing crew.

Jeremy: Alicia Witt has had two great roles in a row, well in a role for me. She is a singer who acts. I have never heard her sing but acting seems to be pretty strong for her. The adrenaline rush of Carol and Maggie escaping hadn’t totally subsided so when they burnt the meeting party up I was happy. As an audience we have only been given a small taste of the Saviors so it is hard to say they deserved it or not. Regardless it was effective. It was also good to hear they have resolved the bikers getting blown up. So it was totally noticed by their group. Does that mean they are close to Alexandria or possibly have found it already?

Kevin: Hilltop didn’t seem far away. Rick & crew traveled back to Alexandria then seemed to have less than a day drive to get to the Savior’s compound because they did do some minor scouting before attacking last episode. Your later question is what intrigues me, was that really Negan that Rick killed at the end or is there another branch of the gang waiting out this slaughter elsewhere?

Jeremy: Nah man that isn’t him. Remember ole Chain smoker said they are all Negan. it is a camouflage so the real guy never has to reveal himself. As soon as he said “I am Negan” I said, you idiot. Rick of course is going to act impetuous and blow him away instead of investigating. This is the biggest problem with their plan. They have no idea who he is so they are just killing random people basically.

Kevin: I don’t think they’d all call themselves “Negan” if it was a random group. Alexandria has still decimated The Saviors though without any of their own loses. Abraham, Daryl & Sasha survived the encounter on the road and everyone got out fine from the compound raid. The Saviors are looking like they’re larger the Woodbury with the casualties they’ve already sustained.

Jeremy: Oh there has to be a lot of them since none of the people last night seemed all that concerned an entire bunker was over run by a few people. I get the feeling they have been trained so that whenever someone asks for Negan they will say they are in order to confuse the situation. This way he is always protected. The name Negan is asexual as well so it could be a woman. This way the dictator is always seemingly safe.

Kevin: Don’t you worry, I was getting the Spartacus vibe last night.

Jeremy: How did I not think of that?

Kevin: I don’t know. The second chain smoker mentioned it, my mind went there. I’m still surprised though that the Saviors is that big. I mean, why were the Wolves still around? Why not install your own people in Hilltop if your numbers are that great? How did they not try to co-opt Alexandria pre-Rick into some sort of a deal since they had needed goods then?

Jeremy: Good questions on all of that man. Maybe the numbers are growing still. Also a possibility that the Wolves were escapees or even scouts for the Saviors? Some of this will never be addressed but still good fodder. it all seems reasonable if Negan is supposed to be the boogeyman they are making him out to be.

Kevin: Almost crazy that they can pack in enough information to a one hour show that you want to ask questions like those. That raid was entirely too smooth as you pointed out last week though. Even Carol & Maggie getting captured ended up in eliminating more of the gang you were after.

Jeremy: Yeah for sure and Carol taking responsibility by saying she should have killed the guy. I was lost on how that would have helped though.

Kevin: That was a head scratcher of a reason to come up with. He wasn’t in charge. Even if Negan doesn’t want to be known, everyone in that crew seemed to respond to Paula even the rescue group, not the random ass guy.

Jeremy: Right so shooting him would have just meant the other three draw arms and mow you down.

Kevin: Anything else to cover from the episode? I’m starting to run out. Carol & Paula were the show last night and I think we’ve covered them well enough.