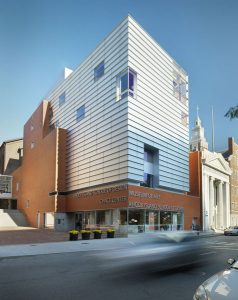 The Rhode Island School of Design Museum. Saved from tipspoke.com.

The WWE starts us off with a run down of the WWE Draft rules which anyone reading this column took a look at earlier today, right? Then Stephanie & Shane McMahon come down. Stephanie tells us that the Cruiser Weight Classic is Raw property. She also cuts off the Yes! chants to introduce Mick Foley, which is a strange choice. No real connection to her and their characters are vastly different, which could be the reason to keep up the bickering from her. Foley tries to hype this draft is equivalent to the Attitude Era. That sounded more like a “This is presently happening” instead of “This has a chance of happening.” I really doubt the second part. Shane gets to introduce Daniel Bryan. Stephanie is completely right to question whether his popularity is bigger than Foley’s. Mick has certainly worn some of his welcome away. There’s no question of the present popularity though. Bryan is still destroying everyone. Bryan is fired up about the new opportunities. He is selling a new vision of wrestling that I still haven’t bought. It’d be great if he has some input behind the scenes. Stephanie wraps things up by insulting Shane & DB.

Chris Jericho & Kevin Owens are taking on Sami Zayn & Cesaro. Owens distracts Zayn to turn the tide and get some direction going in this match. Zayn is still taking a beating after the break. Cesaro gets the hot tag. It ends with the Uppercut Train. “Everyone of those uppercuts stings” – Michael Cole with the understatement of the year. Cesaro goes for the Neutralizer but gets tosses out of it. Jericho catches him with an enziguri. Zayn tags back in against Owens. Zayn counters a Pop Up Power Bomb. Both teams make blind tags that lead to Cesaro & Jericho being back in. Cesaro Swing. Owens makes the save. Zayn goes after Owens. Jericho tries to take advantage but Zayn reverses Jericho into a small package for the win.

Daniel Bryan runs into a bunch of no name Superstars until he runs into Stephanie McMahon. She insults him some more. He tells her she should have done something more than sully Raw in his absence then walks off.

The Miz & Maryse are back on the head set. Darren Young is taking on Alberto Del Rio. The Miz distracts Young who ends up clocking him. The Miz still has the ref distracted still so Del Rio goes to grab the ref. Young school boys Del Rio for the win. This kind of opponent is a good idea at points for a title reign but not right now.

John Cena waxes about AJ Styles then introduces Enzo Amore & Bigg Cass. Enzo does another ridiculous promo. The best line was saying that Styles had a soccer mom hair cut. Cena says that no of the stuff that Enzo said are anything but punch lines. Enzo runs around the ring which confuses Cena even more. The Club thankfully interrupts Cena playing the Old Man card. They talk about being a team unlike Cena and Enzo & Cass. They look forward to beating up everyone in this match. The New Day comes and say they faced the demon down on his own turf. They end up doing a “How you doin’?” skit with Pokemon Go. Cena gets them to say “New Day” rocks. The Wyatt Family finally shows up.

The match between the twelve men is after the break. A Strowman vs Big Cass show down turns into an all out brawl. Kofi tags in solely so that the heel can be controlling the action before the next break. Cena gets a tag to take on Bray Wyatt. For some reason, Cena was scared of Wyatt bridging. It turns the tide again to the heels. Cena gets to take a beating until the next break. Big Cass gets the hot tag against Styles this time around. Xavier Woods stepping up and sentoning onto the Wyatt Family. The other trio take each other out but leaves Enzo in the ring with Styles. Cena tries to help out but Enzo ends up clocking him on a reversal. Styles connects with an enziguri. He follows up with the Styles Clash for the win.

Seth Rollins does a promo in an empty arena. He reminisces about their time in The Shield. He still concentrates on his distaste for Roman Reigns actions. He’s pissed that Dean Ambrose stole a piece of his life. Rollins is ready to end Ambrose’s fairy tale of a run with the WWE Title. I really liked it. Definitely a different feel for the WWE.

Shane McMahon talks to Mick Foley. Shane tries to drive the wedge between Foley & Stephanie but Mick isn’t buying. He seems the passion in her work even if she goes over board.

Baron Corbin is taking on Sin Cara so that you can see two guys who need directions with their characters after the brand extension. The End of Days for the quick win. Kalisto comes out and makes the save. Kalisto turns his back for a moment. Corbin grabs his legs and clocks Kalisto from behind.

Becky Lynch & Sasha Banks are taking on Charlotte & Dana Brooke. They’re having a decent match when Natalya comes out and assaults Lynch causing the DQ. Charlotte & Brooke lay out Banks. Both matches hype taken care of. WWE writers dust hands, feel good about themselves for reason I don’t know.

Dean Ambrose uses the old Shield video camera look for his promo. The WWE might make me believe in change before the end of the night. He knows both Rollins & Reigns are nasty men but he still plans to prevail at Battleground. Not as long as Rollins but equally as effective.

The night of tag team matches continues. Dolph Ziggler & Zack Ryder are taking on Rusev & Sheamus. I have to laugh that the League of Nations can’t get away from each other. Ryder gets worked over. Ryder gives Sheamus a neck breaker to get an opening. Rusev & Ziggler get tagged in. Rusev hangs up Ziggler on the ropes. He follows up with a jumping kick to the back. The Accolade for the win.

Daniel Bryan & Mick Foley try to be friendly but then only insult each other. They then do actually point out their similarities. They’re standing in each other’s way of being great as their GM. The WWE is trying to play up the split. Seeing is believing gentlemen.

Dean Ambrose is taking on Seth Rollins in the main event. Why do I get a feeling that this match will still end up with a screwy finish despite two really good “End of Feud” type promos earlier tonight? I suppose Battleground. Shane, Daniel Bryan, Stephanie & Mick Foley are all at ring side. Rollins goes for a suicide dive. Ambrose catches him with a fore arm. Ambrose connects with his suicide dive. Ambrose misses the spinning clothes line. Rollins tosses him into the barricade. Rollins follows it up with a power bomb into the barricade. Ambrose double legs Rollins going for the Pedigree. Rollins counters the counter but misses a frog splash moments later. Both men struggle to their feet. They trade blows. Rollins power bombs Ambrose into the turn buckels. Ambrose bounces off and DDTs Rollins. Ambrose goes for the cover but Rollins puts his leg on the rope. Rollins rolled outside. Ambrose sets up Rollins on the Spanish announce table. Rollins rolls away. They fight on the apron. Rollins connects with the Pedigree. Ambrose kicks out. Lunatic Lariat connects in the ring. Ambrose goes to the top ropes. Rollins meets him up there. Ambrose tosses Rollins the referee. And there we go, stupid double pin after a superplex into a small package. Stephanie appoints Seth Rollins the winner. Stupid cliff hanger. – Kevin DiFrango