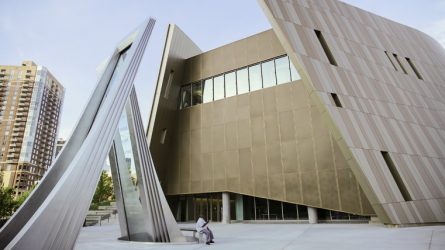 The Center for Civil & Human Rights in Atlanta GA. Designed by Phillp Freelon in partnership with HOK. Saved from Secondstory.com with no photo credits.

The WWE starts us off with a new feeling “Last Week On Raw” video package that was more like what most TV shows have these days. It covers more than just one angle.

Sasha Banks gets the first promo though. She gets to announce that their rematch will take place at Summerslam. Charlotte interrupts. She doesn’t have much to say though so Sasha berates her. Charlotte will beat her all by herself. Charlotte calls her a one night stand. Sasha throws it back in her face. Chris Jericho calls for “Quiet” multiple times. He came out to defend Charlotte. Jericho tells Sasha that she isn’t a Boss, she’s a brat. Enzo Amore comes out and does the bit. No Big Cass, so far. He asks Sasha “For real, how you doin’?” then kisses her hand. They warm to each other. Jericho & Charlotte get sick of their antics. Enzo’s replies are better. Mick Foley comes out to confirm what everyone in the arena already knew, we were getting a mixed tag team match, NEXT!

The match features all four of them but the only memorable part was the double suicide dive spot that led to the first commercial break. Enzo Amore & Chris Jericho are fighting. Enzo gets to sell even in this tag team. Jericho reaches for a tag even after he drop kicks Enzo coming off the top rope. Sasha Banks & Charlotte finally go at it. Banks gets the upper hand until Dana Brooke comes down to the ring. Banks cuts her off. Banks reverses a pin attempt. She slaps Jericho after Charlotte kicks out. Charlotte kicks the back of her knee. Natural Selection for the win. Jericho gives Enzo a Code Breaker after the match.

Stephanie McMahon & Mick Foley are having an awkward exchange backstage about Smackdown. Mark Henry wants to re-open the Hall of Pain. They tell him he’s better as a mentor. Henry thinks he has one more run left. Foley gives him a match against Rusev.

Golden Truth have a back stage segment. They have a match against the Shining Stars after the break. It’s all about R Truth playing Pokemon Go at ring side. The Shining Stars are so bad, they can only win on a quick pin.

Michael Cole is ready to talk to Finn Balor when Seth Rollins interrupts. Rollins tells Balor that everything he has done, Rollins did before him. Balor admits that most of his statements are true but he’s still going to beat Rollins at Summerslam. Balor says that everywhere he’s gone, he’s seen someone just like Rollins. He always topples “The Man” and he will be the first Universal Champion. Balor tells Rollins that the only thing he’ll have handed to him at Summerslam is his ass. I was wondering how they’d make this feud personal, they just did it.

I didn’t bother listening to Lana introducing Rusev. He takes on Mark Henry. Rusev make Jojo introduce him first even though that isn’t the custom in any sport. Herny over powers Rusev early. Henry gets a commercial break match. He powers out of an Accolade. Herny makes a mini come back. Rusev kicks Henry in the back of the head. Accolade for the tap out victory. Rusev claims that no US athlete in Rio deserves gold. He is a super athlete. Roman Reigns comes out. Interesting match up. They go face to face. Rusev jaws at him some, gets in the first hits but Reigns takes over. He ends it with a Superman Punch on the outside.

Darren Young comes out with Bob Backlund for his match against Titus O’Neil. O’Neil wonders when he was great to begin with. The double back breaker throw combo gets my attention. O’Neil has the upper hand early though. Young finally gets back in it by countering some of O’Neil’s offense. O’Neil pulls the tights for the win. Heel O’Neil could be a way to spice his character up.

Stephanie & Mick Foley are talking nonsense again when Sheamus and Cesaro come in complaining about Mark Henry getting a US Title match. They get a match to be the next No. 1 contender.

Nia Jax is taking on Ariel Monroe. This match is basically a replay of the Braun Strowman match. Squash win.

Sami Zayn draws the Tom Phillips card. He says that Seth Rollins is just like KEvin Owens, he has a big mouth. Zayn backed himself up at Battleground so he’s going to take that same fight to Rollins.

Xavier Woods drew the un-matching fruit so he will not be at ring side for New Day’s match against The Club. He is banned from ring side also. Big E & Kofi Kingston are taking on Anderson & Gallows who don’t have first names now? In a surprise move, Anderson & Gallows go for Too Sweet. Big E rolls up Anderson for the win. Anderson & Gallows beat up all of New Day, even a returning Woods. I’m not a fan of the loss part. They end by returning to the ring to crotch Big E.

Cesaro takes on Sheamus. Cesaro gets control early, ending with a senton to the outside. Sheamus tosses Cesaro into the ring post. Sheamus starts clubbing away on Cesaro. He turns things back around by powering Sheamus up for a suplex. Cesaro reverses Rolling Hills into a Gotch Neutralizer for the win. I’m surprised how quick that match was. Good for Cesaro who appearas to have a push, again.

Heath Slater brings back Jinder Mahal. Who quickly beats Slater to gain a contract to Raw.

Seth Rollins vs Sami Zayn is the main event match. Rollins dumps Zayn to the outside. Zayn kept the match competitive but it was more of a squash match for Rollins. Win after a Pedigree.

I had pretty much slept on Paul Heyman’s promo hyping up Brock Lesnar and how he’s going to destroy Randy Orton at Summerslam. Heyman starts to stress the importance of the RKO when Orton hits one on Brock Lesnar “Out of Nowhere.” Stephanie & Foley come out to complain. It’s kind of stupid in this instance to complain about the scenario. It’s an inter-show match. – Kevin DiFrango