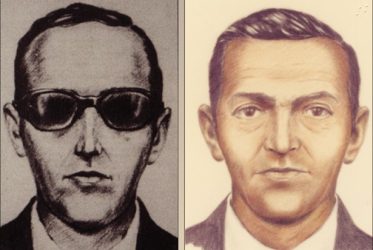 Artist sketches released by the FBI of a man calling himself D.B. Cooper, who vanished in 1971 with $200,000 in stolen cash after hijacking a commercial airliner over Oregon, U.S. FBI/Handout via Reuters

Ken & Kevin are here with one of the promised episodes recorded prior to episode 74. They start by talking about an emerging trend, a husband flying in first class while his wife and sometimes family, fly coach. What’s up with that? Why do women tolerate that nonsense? How happy is Kevin that the word whingeing was used in the article? Ken asks for his wife’s opinion on the whole situation? Would she take their child on economy while Ken sat in business class? What kind of a man would it take to hijack a plane? Why did this become a thing? Why is D.B. Cooper the most well known of these hijack artists? Was this crime ever on Unsolved Mysteries? Why did the FBI just recently shut the doors on this 44 year old case? What evidence has been found? What hasn’t been found? Is there a chance that D.B. Cooper is still alive? Ken & Kevin wrap the show up by talking about Pokemon Go! Where does Kevin get all of his game tips from? Is it a family bonding moment for Ken? How ridiculous was it that both presidential campaigns seized on it’s popularity? How ridiculously good was the Bell Time Beer of the week? Find out by clicking on the link below.