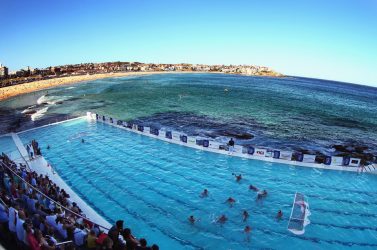 SYDNEY, AUSTRALIA – JANUARY 04: A general view of play during the Water Polo by the Sea match between Sydney University Lions and UNSW Wests at Bondi Icebergs, Bondi Beach on January 4, 2013 in Sydney, Australia. (Photo by Ryan Pierse/Getty Images)

Ken & Kevin decided to publish this episode before episodes 72 & 73 because it is more topical. What is that topic? Well, it was Michael Phelps and whether he committed some douchery in his victory celebration. How many events does Kevin like to watch? Why did he get into the Olympics? How much does Ken view the Olympics? How douchey was Chad le Clos shadow boxing in front of Phelps before the race? The guys stay amongst the swimming when they start talking about a shark that is 400 years old. Where do you test for this fish’s age? They live near Greenland, so does the cold weather aid in extending their life? How much do we know about this fish though? Ken & Kevin stay in the animal kingdom and talk about cats getting high off of catnip. What key differences are there between it’s affects and that of marijuana? Does catnip affect more than just domesticated cats? Why can’t Kevin buy dognip for his dogs? The guys end by talking about a bus that will do what exactly? Is anyone surprised that it’s a creation in China? Would Ken or Kevin like to drive under it? Why was this vehicle created anyway? The guys end with the Bell Time Beer of the week. It’s not just one this week so go ahead and click on the link below to figure out what they are.