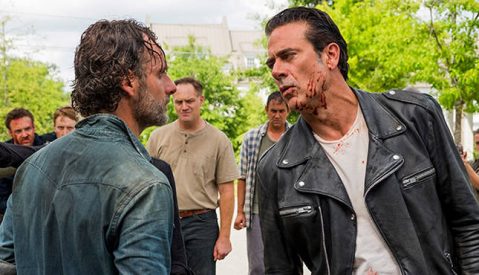 Rick, who are these people behind me? Are they even in the cast? All rights to AMC/Gene Page.

Kevin: So are we going to get at the Walking Dead or not?

Kevin: I’m still in the “This episode ran too long camp” but it’s made more tolerable when stuff happens and pieces start falling into place.

Jeremy: OK see I didn’t think that at all outside of the Kingdom parts. They never went back to that and it was seemingly placed in there since they haven;t been seen since episode 2.

Kevin: For all of the jumping around they did, they did need to do more especially into the Kingdom. I had no idea why Mr. Chest Protector was so hot under the collar about going against The Saviors.

Jeremy: He was the guy that got punched in the face so I figure this is the reason. I thought he was going over for a booty call. The scene later implied he was saving supplies on his own or was that the next delivery?

Kevin: You’ve got me because the writers still didn’t spend enough time with him to know his motivations. Maybe we could get some of that and less hugging at the end?

Jeremy: See the end of the episode was exactly what was needed though. it has been nothing but dire sequences. We even complained that the show has been all solo episodes. having them go to Hilltop and getting the group nearly complete again had to happen. I couldn’t imagine another half season of seemingly spinning wheels.

Kevin: I was a bit surprised that Daryl & Jesus escaping the Saviors compound wasn’t covered more too. I guess riding a loud bike away doesn’t draw any attention?

Jeremy: It seems like the saviors come and go as they please so the bike wouldn’t be a big deal I think. Daryl’s escape was unique. Never seen someone escaping stop to eat peanut butter.

Kevin: And am I the only one who was waiting for someone to come into the peanut butter dispensary and interrupt Daryl’s binge?

Jeremy: Yes I kept waiting. I wondered if that was Dwight’s room? He stared off at the statue on the TV. Then we next see him eating the peanut butter after a rest.

Kevin: It’s possible that the room was Dwight’s but he didn’t have an ELT sandwich so I’m going with no. It also seemed like whatever the incident was near Daryl was going to cost him his freedom.

Jeremy: He was the only guess due to the staring at the statue. Has there been a worse time for wrong place at the wrong time? Poor Fat Joey just took a clubbing for being there. He wasn’t even good enough to run or talk his way out.

Kevin: Well, is peanut butter Daryl’s version of spinach to Popeye? I ask just because Fat Joey is obviously well fed and should have more energy than Daryl. Couldn’t the big tub of goo at least fight against a weakened Daryl?

Jeremy: Not really they showed that poor guy to be a mess anyway. I was expecting Daryl to rough him up but.bot kill him. RIP Fat Joey. Oh yeah as well as the red haired savior. Michonne probably did her a favor?

Kevin: See, now I was a bit confused by that story. Did Michonne remind her that there’s no getting away from the Saviors? Did I sleep thru what her intentions were in a previous episode? Because if she was trying to flee the Saviors, Daryl got away so I’m assuming she could have too.

Jeremy: Michonne wanted to see what they were up against. She didn’t expect that huge compound. She also knew that woman was going to blab about what happened and there was no chance of this turning out well. So, Reddy’s gotta go. I I initially missed that part since it was actually subtle.

Kevin: Ahh, I missed that too. For some reason, I thought Michonne let her move along and just swiped the SUV. Shouldn’t have missed that point though since that story ended after I had a nice sleep.

Jeremy: Ha. Nah there was no sound. She just slumped over. Unlike poor old Spencer who had it coming.

Kevin: Oh that scene brought me more glee than it probably should have. Spencer has been a giant nudge though since he started getting screen time. Negan’s terrible joke about having guts made me chuckle.

Jeremy: I mean he wasn’t exactly wrong but he sucked as a person so yeah. I swear Negan is a personality test for the viewers. He was cracking me up. His admission about being incorrect had me laughing. Then of course he turns scary.

Kevin: I did expect him to be more scary after Rosita fired and missed. I was surprised that Olivia was the only casualty. It did make sense for Negan to take Eugene with him though if the Saviors are even remotely worried about their bullet cache.

Jeremy: Now with someone who knows how to make bullets you never have to worry. How bad of a shot is Rosita? She has him point blank and she hits Lucille? She gets poor Olivia killed from it as well. I was sad to see her go. She was one of those fringe people but she was good. If anything Negan is consistent. He didn’t kill Rosita. Instead someone else has to suffer.

Kevin: I was a little surprised that Rosita missed because I felt like the Group had deemed her a great shot at some point after her training. It definitely failed her in her anger. Olivia was one of the few Alexandria town folk who have some personality so it was a bit sad to see her go. And you are correct, you screw up, someone else pays for it.

Jeremy: I know Sasha was the good shot. I cant remember much on Rosita. In the comics it was Carl who shot Lucille so they gave Rosita the honor. I am guessing Nata (right?) is going to be someone the group kills off now.

Kevin: Do you mean the woman who was hitting on Spencer and got to shot Olivia? If so, her name is Arat. I had to look that one up because she was introduced about 5 minutes before playing a somewhat vital role in the show.

Jeremy: OK yeah I knew I had the name wrong. Seems that there is an effort to build up foils on Negan’s side of the equation for the eventual showdown. Its a smart plan since the Saviors have about 4 faces to hate right now. Even then I am wondering how solid Dwight is on Negan’s side.

Kevin: Dwight certainly has more sympathy on his side because of having his wife stolen from him. They do need to do more building on both sides of this war. I’d honestly be fine if the war doesn’t happen in the second half of this season so long as you start to hate or like the other groups. Plus, they do need to connect all of the groups because Hilltop & Alexandria are the only ones with one.

Jeremy: The coming war should be saved for next year right? Give it all time to develop instead of cramming it all in 8 episodes or whatever. But then that seems like a lot. Its funny how one really good episode makes me feel a bit better about the show. Negan sort of derailed the show and this week they put it back together.

Kevin: Well, they could have accomplished some of my points during this portion of the half season but because they didn’t, they need more time. I liked the Kingdom but how do I really know Ezekiel isn’t a crazy person who happens to have a pet tiger? The residents of Hilltop who don’t like Gregory are faceless and give little reason why they don’t like him. Lots of things that can be explored. The plight of the women at the beach was the most well spelled out of all the side groups.

Jeremy: Man, I forgot about the seaside/ocean side group already. Isn’t anyone who keeps a pet tiger kind of a crazy person? They haven’t fleshed out the Gregory thing at all. Suddenly everyone is making Maggie pies? It was hard not being encouraged by the end. Michonne finally caught Rick at the right time and he admits they have to fight. I just wish there was more there. All we really saw was Rick looking sad. Until Daryl gave him back his sidearm, which as a fanboy, was pretty sweet.