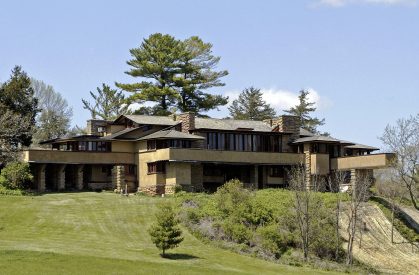 Taliesin, Frank Lloyd Wright’s 600-acre Wisconsin home, is shown May 4, 2004, in Spring Green, Wis. Taliesin remains as some of the most innovative American architecture ever and are a living example of his work and philosophies. (AP Photo/Morry Gash)

The WWE starts us off with Goldberg. His entrance takes almost as long as the Undertaker’s.He notes that Kevin Owens‘s best work is on the work. Goldberg wants to spear, Jackhammer and pin Owens for the Universal Championship and to take it to Wrestlemania to face Brock Lesnar. Owens comes out. He reels off his accomplishments and even throws in a dig at Chris Jericho. Owens finishes by telling Goldberg that he’s going to be next. Goldberg challenges him. Owens teases accepting then says that he’ll see him on Sunday when he holding the Universal Title above him.

New Day comes out. Not only are they going to have ice cream, they’re going to have New Day (Lolli)Pops. They make an Oscars joke which falls flat involving The Shining Stars. New Day’s opponent ends up being Jinder Mahal & Rusev with Lana. Kofi Kingston sits this match out. New Day is in control with a splash on the ring apron before the break. Corey Graves is really pushing the name “Hard Body” Mahal. Xavier Woods ends up selling like normal. An enziguri gives Woods an opening. Hard Body gets to sell for the heels. Mahal super kicks Big E. Woods tags himself in as Big E falls out of the ring. Kingston gets in an argument with Lana. Rusev joins the argument. Mahal gets distracted and Woods rolls him up for the win.

Enzo Amore & Big Cass are back stage talking about winning the WWE Tag Team Championship. Enzo is doing the talking actually. Big Cass is a wet blanket and points out they haven’t won gold anywhere yet while Gallows & Anderson have done so around the world. Cass then goes positive so Enzo goes back to talking trash.

Sheamus & Cesaro are insulting Enzo & Cass and Gallows & Anderson with when Samoa Joe comes in and mocks Cesaro for not having made it in the WWE yet. Cesaro has to back of Sheamus then tells Joe all he’s doing is HHH’s bidding. Joe tells Cesaro it’s cute that he’s clever but it’s getting him nowhere. Joe walks off. Cesaro holds Sheamus back again.

Stephanie McMahon reels Mick Foley in with an apology but then she apologizes for putting Foley in the position he’s in which he can’t handle. Foley doesn’t respond and sits there with a goofy grin on his face. The weekly reminder of why I prefer Smackdown over Raw.

Akira Tozawa comes to the ring while Brian Kendrick gets a taped interview in which he highlights the lessons that he has taught Tozawa already. Noam Dar is his opponent though. The star of 205 Live, Alicia Fox, is with him. Tozawa gets in the early offense. Fox distracts Tozawa. Dar kicks his legs out from under him to gain control. Tozawa recovers and nails the head butt suicide dive. After an exchange of countered move, Tozawa hits the Snap German Suplex for the win. Kendrick attacks Tozawa from behind and lays him out. Lesson #3: Have eyes in the back of your head.

Mick Foley gets to insult Samoa Joe about being HHH’s puppet. Foley gives Green Bay a match between Joe & Cesaro.

Charlotte comes out with Dana Brooke. She is upset that Bayley didn’t hand the Raw Women’s Championship. Bayley is playing the fans. Winning illegally is fine by Bayley. She’s going to be a one hit wonder. Bayley finally comes down to defend herself. Bayley reminds Charlotte that she has now beaten Charlotte three times. Bayley’s next dream is to be champion going into Wrestlemania. Sasha Banks comes out and defends Bayley. Charlotte calls her out for hogging the spotlight from Bayley. Nia Jax is Charlotte’s partner tonight.

The match starts after a break. Banks is getting tossed around by Jax. She even tosses Banks into her own corner so that Bayley can tag in. Jax gets a quick jump on Bayley. Bayley uses speed to gain the upper hand. Sasha tags in and doesn’t come in throwing the match off. She ends up getting a beating from JAx but turns things around on Charlotte. Brooke gets Bayley to Bellied on the outside. Another break for the ladies. Banks is taking a beating again. It’s been a very see saw match. Bayley gets to fire up against Charlotte. Jax tags in while Bayley goes to the top rope.  Sasha dives from the top rope. Jax catches her then slams her on Bayley. Jax follows up with a leg drop on Bayley for the win.

Foley tells Braun Strowman he doesn’t have competition for him tonight. Strowman demands a contract signing.

Luke Gallows & Karl Anderson come out first. Enzo comes out and does the schtick. Big Cass likes to say Sawft. The match is between Gallows & Cass. Gallows gets the upper hand early with a slight distraction from Anderson. Cass being bigger than Gallows is pretty amazing. Cass fires up. After the Empire Elbow, Anderson jumps up on the apron. Enzo joins the fray. He reverses a throw and tosses Anderson into the stairs. Big Cass catches Gallows with a big boot for the win.

Titus O’Neil pitched Sheamus on them becoming a tag team after Samoa Joe dispatches of Cesaro. Um, that contradicts the segment with Foley making the match with those two because this segment was “earlier today.” O’Neil attacks as Sheamus to get the upper hand. He doesn’t have control for long. Brogue Kick for the win.

Seth Rollins comes out not looking like he’ll be able to make it to Wrestlemania. It could be a fake out move. We shall see. Rehab is moving along. Rollins isn’t sure about his head space. He wondered if he deserved the injury. For some reason, people start to chant “CM Punk.” Rollins is mad about being played by HHH. Graves then asks if Rollins will be at Wrestlemania. Rollins says it isn’t looking great. He doubts the doctors will clear him in time. HHH comes out smiling like a butcher’s dog. Samoa Joe shows up behind Rollins. HHH tells Rollins that he won’t be at WM. HHH points out how he’s always propped up Rollins. He’s telling nothing but the truth which is why Rollins isn’t sympathetic. As much as HHH is talking about being called out at WM, it makes me feel like they will have a match. Rollins vows to be at WM and make it the last thing HHH ever does.

The Big Show has a two on one match with The Shining Stars. No matter the opponent, The Shining Stars were going to lose. Graves gets to use the “Frying Pan hands” line. Choke Slam on Primo for the win.

Neville tries to talk down to Tony Nese who isn’t impressed. Nese still doesn’t have a personality. I’m glad he didn’t act like a coward at least. Jack Gallagher & TJ Perkins are their opponents. Neville controls Perkins. Nese and Neville continue their problems. Gallagher takes over. Detonation Kick by Perkins is followed by a drop kick in the corner by Gallgher. He then locks in a modified Rings of Saturn for the tap out win.

Beth Phoenix gets a video package that is more consistent than her actual career. I really enjoyed her work so don’t get that statement all twisted.

Sasha Banks & Bayley agree to have each other’s backs. Stephanie then gives Sasha another match against Nia Jax.

Cesaro comes out for his sure loss. Samoa Joe comes out chomping at the bit. Cesaro gut wrench suplexes Joe which is quite impressive. Cesaro tweaks his knee so Joe takes advantage and works it over. Commercials are weird. Joe crashes into Cesaro then gives him an enziguri. Cesaro reverses a suplex. Joe works on the leg more. Cesaro trys to turn it into a Sharpshooter. Joe fights out. Cesaro makes him eat an uppercut. Cesaro goes for the Swing but Joe attacks the leg again. The leg keeps failing Cesaro. Urinogi for the win. Joe came here to hurt people. He runs down Cesaro’s accolades then notes that he beat him. Sami Zayn attacks from the side of the stage. Joe gets to attack Zayn when security is pulling him away. Zayn breaks free of security and stage dives onto Joe.

Braun Strowman talks down to Mick Foley some more. Foley flips out and tells Strowman he will respect Foley at least as a WWE legend. Strowman walks Foley down. Roman Reigns music hits. They brawl immediately. For some reason, Reigns thinks one Superman punch will take down. He’s gotten him with multiple SMPs before. They fight through the crowd. It ends with Reigns spearing Strowman through the barricade. Reigns takes his sweet time signing the conrtact. Strowman recovers. Reigns SPMs him again. Strowman throws Reigns into the turn buckle and it explodes. What rigging by the ring crew. Awesome look. Strowman walks away. Reigns crawls over and signs the contract. Good closer. – Kevin DiFrango