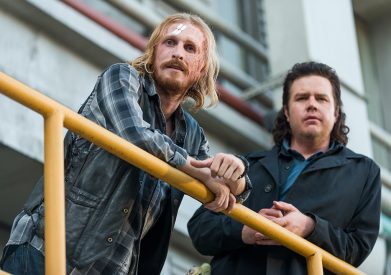 Kevin: So, I thought last night’s The Walking Dead was fascinating. Always interesting to see what’s going on with The Saviors.

Jeremy: Getting in to their community was interesting enough. Always weird seeing how Negan treats the people and in this case Eugene, Dwight and the Doc. Good old what’s his name.

Kevin: Negan knew way back when the attempted assassination attempt took place that Eugene could be useful since he made the bullet so Negan had to treat him right. And not too surprisingly, Eugene fell in line because he is a coward and has been since they introduced him on the show.

Jeremy: But then Eugene had that entire talk with Abraham about being friends and that Eugene is a survivor. Part of me wonders if this is the long play on his part. He isn’t stupid at all. he’s smart enough to see the Wives plan and not act on it because it would be too obvious right off the bat. It doesn’t mean he isn’t plotting. At the same measure being a survivor means adapting so with is jar of pickles he could be comfortable.

Kevin: That jar of pickles was a star of the show. I do agree with you though, Eugene could be letting things play out longer before he acts. I was laughing at The Wives when they said their friend weighed 125. Didn’t think about their target when I heard that, but made sense later.

Jeremy: Ya know, I didn’t get it until just now. So that explains the two pills.See I thought they wanted one as a back up or to possibly slowly poison him instead of all at once.  Their actions though highlight a question I had. Why no one has just taken him out. People walk all over that place with guns. Would be pretty simple.

Kevin: Now that is a question I didn’t think about. One would think it’d be a revolving door of leaders with who can stay on top. You’d have to think that at a minimum all of the guys who had their wives taken would really want to kill Negan.

Jeremy: Right, I mean he has his funny/cool moments but nothing really explains why people follow and fear him. Even his rules seem arbitrary and he has shown himself to be a liar. Just ask ole Doc What’s his name. He said he would be fine just tell the truth.

Kevin: And it walks back Negan’s logic of wanting to keep assets too. He “knows” Eugene is a  PHD but he’s not that type of doctor so why kill this one? I suppose they could swipe one from one of the other communities they lord over.

Jeremy: Two things on that. Eugene made is speech about being replaceable. Negan just showed that wasn’t true as he just tossed their Doc in a boiler. No one is safe with him and it makes me wonder when Eugene saw this he changed his tune. He could have been comfortable but after seeing that he knew exactly what he needed to do to survive.

Second half of this is losing the doc may be the impetus to go to the Kingdom and recruit another one form them. Negan isn’t supposed to go there but more than once it has been mentioned that The Kingdom has good doctors. Negan shows, breaks the rules, chaos, we finally get our war.
Kevin: The woman making Eugene watch Negan kill the Doc was cracking me up most of show. From her grabbing the pickles to her not wincing about Doc going into the fire was scary because you could even see other guys wincing during that scene. Plus, I couldn’t stop staring at her neck tattoo.
I was thinking the same thing after I brought up the idea of Negan stealing a new doctor from somewhere else.
Jeremy: OK yeah we are on same page with the neck tattoo. Was she in Alexandria when Negan killed Spencer or was that someone else? I know there was another woman. I have wondered what the distinction is with Negan and Wives and soldiers. Are the soldiers not pretty enough or does he only keep “hot” women as wives? It is a weird situation. I was waiting for the though to start smacking Eugene around since he kept whimpering and crying.
Kevin: Not completely sure which scenes she may have been in but I do feel like she’s been around before. Not sure on who Negan picks either as I thought neck tattoo was pretty attractive. I did expect more violence in general on Eugene because the whimpering myself even if it was just hard enough to get him to stop.
Jeremy: I don’t think Josh McDermitt gets enough credit for his acting. He is quite the opposite of Eugene but yet is totally believable. This is a big part fo the intrigue of this episode. Eugene si fully fleshed out even though he holds himself together so rigidly. I liked the scene of him playing Yar’s Revenge and moving his leg away form the one Wives’ touch. Did he move it due to being aroused and knowing he cant do anything or did he move because she was annoying him while he played a game?
Kevin: I was leaning towards being aroused but he really hasn’t shown much interest in women aside from being a creeper so I’m going with he was being annoyed while playing a game. McDermitt has to be so awkward and he’s great at it.
Jeremy: Then there is Dwight, as I told the wife last night, none of tonight’s episode is in the comics so this is all new territory. Dwight is important in the comics so it was good they finally got back to him and gave us a bit of character.
Kevin: Dwight’s end of the story was the aftermath of Daryl getting out which was needed. We got some of the story when Simon came looking for Daryl at Alexandria. So it was cool knowing what happened at The Saviors compound. It certainly did flesh out Dwight way more than the episode in which he keeps looking at Daryl in his cell.
Jeremy: The way the show goes it was easy to forget that Dwight, Sherry and fodder weren’t bad people before. They were all trying to leave and had to go back. The letter from Sherry to Dwight was pretty heartbreaking. He did all of this to keep her safe. She did the exact same thing and yet she felt the worse guilt. I do have to ask why Negan immediately didn’t question Dwight killing her.
Kevin: That story stunk worse than the skunks this morning. She happened to fall into a pack of zombies so I shot her in the head! Shouldn’t Negan at least ask where he found her? He should have been concerned about that considering it was a rendezvous point. Does Sherry end up helping out one other communities to piss off Negan?
Jeremy: I am really hoping she is just gone. It actually does make it more tragic with Dwight having to deal with all of this. Negan did say that if he finds out she is still alive he’d burn his face off til eh died so maybe he didn’t trust him that much. Negan isn’t stupid and I am sure he figures she he didn’t find her or let her go. SO he accepted the doctors admission despite that all.
Kevin: I’m correct in thinking that Dwight planted that note or did someone else do the dirty work?
Jeremy: Oh no he planted it. That was the last line on the note from Sherry to Dwight.

Kevin: Ha. I must have missed that line. The Doctor was being nines shades of a creep about Sherry so I’m not surprised she put that line in there.
Jeremy: I was trying to remember if there was a history. Was he the doctor doing her pregnancy test in the first half of season?
Kevin: You are asking the wrong person for that answer but I’m assuming yes. They don’t rotate through characters too often.
Jeremy: If Negan only had one doctor I would think it was him. Not that it matters since he’s a burnt marshmallow now.
Kevin: The scene at the end when they finally showed the body almost had me on the floor laughing even though I know I shouldn’t. It was too funny seeing the crispy fried top half of the body and his legs just standing there completely whole.
Jeremy: See, I thought he tossed him completely inside the furnace. So when he was just laying there half burnt I did laugh. The glow of the fire on Dwight’s teary eyes was a nice touch as well during the interrogation.
Kevin: Yes it was a nice touch. Dwight’s not going to have to worry about his eyes though if he screws up again.
Tweet