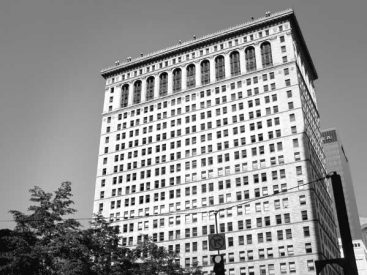 The Oliver Building in Pittsburgh PA. Designed by Daniel Burnham. Saved from phlf.org and by Albert Tannler.

The WWE starts us off with an explanation as to why they didn’t do the Kurt Angle Jason Jordan reveal in Pittsburgh. The WWE loves to embarrass their employees and having that segment in his hometown would be equivalent to jobbing. He only gets to say what matches are on the card tonight. When he goes to leave, Brock Lesnar and Paul Heyman show up. Heyman says that Angle is just trying to take the WWE Championship away from his client. He lists all of his opponents good attributes except for Samoa Joe, who he continues to insult. Heyman says that if Brock Lesnar loses at Summerslam, he’s going to leave the WWE. Interestingly enough though, he doesn’t really try to get Brock out of the match. Couldn’t you request the triple threat match be a No. 1 contender’s match?

The Revival are on the head sets so that Jeff & Matt Hardy taking on Luke Gallows & Karl Anderson as back ground. Scott Dawson & Dash Wilder are doing a good job of pimping themselves. After the break, they reveal that their talking points are pretty limited. Twist of Fate followed by a Swanton Bomb for the win. The Hardys & Revival end up jawing on the ramp. They start brawling. Gallows & Anderson join the fracas. Matt & Jeff clean house.

Dean Ambrose is interviewed by Renee Young. Is this the first time this has happened? She wonders whether they’ll get back together. Ambrose said they clicked last week. Ambrose then start to talk about how he may not trust Seth Rollins yet. Rollins shows up and said they did click. Ambrose drove home the trust issue. Rollins looked like a sad puppy.

Rollins is still a sad puppy. He runs into Cesaro & Sheamus. They make fun of him for not being able to gain Ambrose’s trust. Rollins challenges one of them to a match. Since Cesaro did most of the talking, Sheamus accepted the match.

TJP, Tony Nese and Ariya Daivari are taking Rich Swann, Cedric Alexander and Akira Tozawa with Titus O’Neil in tow. Tozawa injures his shoulder early so him and O’Neil argue into the commercial. Tozawa is taking a beating when we come back. Swann gets a seriously hot tag. Alexander & Swann hit their own version of flip dives. Tozawa connects with a suicide dive but injures himself. Swann crane kicks TJP. Tozawa had already tagged in. Senton Bomb from the top for the win.

The Miz gets to run verbal circles around Jason Jordan. Hahaha. He hates Pittsburgh. Jordan still has terrible music. Jordan doesn’t get to answer the Miz’s first question. The Miz wants to mentor him. Jordan shoots him down. The Miz makes a second pitch. Jordan shoots him down again. The Miz rips on Pittsburgh, which is hilarious. The jealousy is hilarious. Jordan tells the Miz he can insult Jordan himself all he wants, but he needs to keep Angle out of his mouth. The Miz swings first. Jordan ducks and release German Suplexes him onto Bo Dallas & Curtis Axel.

Roman Reigns joins us by video package. He’s using tonight to remind Strowman & Samoa Joe why he’s the man who put down The Undertaker and made the ring his yard. Solid stuff as usual.

Seth Rollins has his match with Sheamus. Cesaro is at ring side but Ambrose is absent for now. Rolling Senton by Sheamus is the first big move after the break. Sheamus goes for Ten Beats but Rollins drops to the floor. Sheamus with an Irish Curse Back Breaker. Rollins drop toe holds Sheamus into the middle turn buckle. Suicide Dive by Rollins. Followed by a spring board clothes line. Then Sling Blade. Cesaro distracts but gets knocked off the apron. Rollins rolls up Sheamus for the win. They beat down Rollins. People finally start chanting “We Want Ambrose” when it’s entirely too late. For some reason, Sheamus & Cesaro go for a second beat down. That’s when Ambrose finally shows up. Ambrose gets dispatched too. Sheamus & Cesaro do their Gotenks pose. Ambrose asks for more punishment after a Neutralizer and gets it.

Samoa Joe gets a similar video package. It is equally good at detailing his exploits over the years. He also doesn’t fear any of his opponents.

Bray Wyatt gets to babble about Finn Balor having no escape. Balor gets compared to a phoenix. He is a never has been, not a phoenix. He wonders if we were hurt by Balor being Abigailed last week. No, it didn’t. Somehow, he circles back around to putting Balor having no escape. Balor’s music hits. He shows up behind Wyatt. Overhead Kick sends Wyatt out of the ring. Balor follows up with a drop kick over the barricade which sends Wyatt away.

Braun Strowman gets the third video package. He wants Brock Lesnar by himself. He’s not just the Monster Among Men. He wants to be the Champion Among Men. It has a great ring to it.

Braun Strowman, Samoa Joe & Roman Reigns have their match at 10. Strowman gets the early edge. Joe & Reigns team up to get him out of the picture for a moment. Joe is taking over on Reigns when Strowman drags him outside. Strowman takes him out then takes out Reigns. Joe locks in the Kokina Clutch. the action is fast and furious. Reigns drops Joe with a Superman Punch on the outside. Reigns goes to Spear Strowman who boots Reigns. He runs over Samoa Joe. Reigns gets tossed back into the ring through the ropes. Strowman tosses the stairs into the ring. Joe hits some quick strikes on Strowman. Joe tries to take advantage of a downed Reigns. Another Kokina Clutch. Strowman runs both of them over. Strowman power slams Joe but Reigns stops the pin fall. Strowman grabs the stairs. Reigns Superman Punches him. Reigns clocks Strowman with the stairs. Spear on Joe for the victory.

Enzo Amore thanks Big Show for having his back. Big Show tells him that Big Cass needs a lesson in respect.

Elias Samson still gets a spot light. He gets to talk about some nice views in Pittsburgh. People are getting suckered in. Of course it’s an insulting song. Kalisto interrupts him. Drift Away aka Cross Rhodes for the Samson win. They really like this guy.

Alexa Bliss reminds us of the embarrassing losses Bayley has taken to her. She then picks on Sasha Banks which makes things even weirder that Banks didn’t win last week. And Banks isn’t there tonight. Bliss spent more time on Banks than Bayley who is her opponent at Summerslam.

Bayley is taking on Nia Jax. Jax gets the early upper hand. Jax starts working over the shoulder. Jax gives herself a side pony tail to mock Bayley. She finally gets an opening and uses speed to stick and move. Alexa Bliss tries to attack Bayley, who gets the jump on Bliss. Jax attacks the shoulder. Jax checks on Bliss. Jax charges Bayley who moves. Jax hits the stairs. Count out win for Bayley. Not the big win Bayley needed.

Big Cass is in the main event. You have fun with this one Pittsburgh. Enzo & Big Show don’t have respect for themselves so they can’t teach him anything. Enzo still gets to do his ring schtick. The WWE has no faith in this match so he even gets to hype the match more. Big Show attacks Cass as soon as he steps over the ropes. Cass hangs Show out to dry. Show follows with a shoulder tackle. Cass starts with a spear to quad. Cass then works over his left leg. Show powers out with his good leg. Cass with a Big Boot. Show chops Cass coming off the middle rope. Show runs the ropes. Cass catches him with another Big Boot. Enzo attacks Cass causing the DQ. Cass talks trash to Enzo after beating him up again. Cass runs at Show, WMD to put down Cass. – Kevin DiFrango