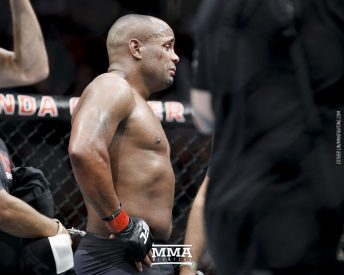 Daniel Cormier after his loss to Jon Jones. Saved from MMAFighting.com

Chris & Kevin are ready to celebrate Stunt Granny’s 420 with a smokefest. Or maybe they’ll just talk about professional wrestling. Mostly from the WWE, though they do get to some other organizations like Lucha Underground (Is that still a thing?) and New Japan. Is John Cena going to be capable of having a match at Summerslam after that suplex he took from Shinsuke Nakamura? Wouldn’t he be a natural fit to take on Samoa Joe, Roman Reigns or Braun Strowman if they weren’t all tied up with Brock Lesnar? Did his testing for USADA and Jon Jones subsequently calling him out after defeating Daniel Cormier make his stipulation for Summerslam more or less interesting? Will it help Jinder Mahal develop as a character since he can’t use xenophobia against Nakamura? Even if it’s obvious where the story is going, is the WWE telling a good tale with Shane McMahon, Kevin Owens and AJ Styles? How about with the Usos? Should the Seth Rollins and Dean Ambrose reunion be drug out in the name of good story telling too? Who missed more, Nia Jax on her elbow drop or Owens punching Mike Chioda? Is the story with Bayley and Alexa Bliss strange because the WWE wants Sasha Banks heel or because she’s not liked back stage? If Enzo Amore isn’t liked back stage, why is he in the main event of Raw? What ellse do the guys talk about? Click the link below to find out.