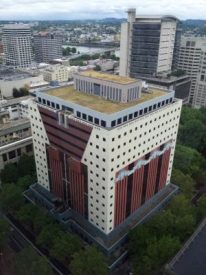 The Portland Building in Portland OR. Designed by Michael Graves in the Post Modern Style. Saved from architectmagazine.com. Picture by Steve Morgan.

The WWE starts us of with a review of the Miz, Cesaro & Sheamus reuniting The Shield. Kurt Angle comes out to hype TLC on Sunday. Seth Rollins, Dean Ambrose & Roman Reigns come down to the ring in true Shield fashion, surrounding him. Reigns wants to wreck Angle. Rollins talks about their history at TLC. Ambrose gets the clean up slot. He admits to getting ahead of himself by getting Braun Strowman added to the match. The heels come out at the end but only get to look tough. Angle makes the matches between various parties.

Elias Samson is out with Luke Gallows & Karl Anderson. It’s kind of sad that Samson could be the leader of a new group. I should not be getting a kick out of the vocal gymnastics, but I am chuckling. They end up singing the Honky Tonk Man’s lyrics. Samson dedicates his song to Jason Jordan. Corey Grraves absolutely destroys Booker by saying Booker T will like Jordan even less now because he interrupted Samson’s song. Titus O’Neil & Apollo Crews are his team mates for a six man match. Booker continues the Hater-ade for the baby face team in general. Jordan gets an early hot tag. Spot where everyone takes out everyone. Crews tags in. Toss Up Power Bomb for the win over Anderson.

Asuka is getting all the hype. I’m not sold that they’ll carry through. Emma wants her attention. Alexa Bliss sucks up to Emma. It works. They’re going to team against Mickie James and someone else.

Jack Gallagher & Brian Kendrick have been attacking Cedric Alexander so Alexander finally struck back. That type of video will help 205 Live more than hyping Enzo Amore. Rich Swann came out to corner Alexander. A Kendrick distraction appears to not work at first but ends up doing the trick in the long run. Gallagher ends up working over Alexander. He turns it around with a Trouble In Paradise. Kendrick grabs Alexander’s leg. Swann takes out Kendrick. Lombar Check for the win.

The Miz, Cesaro & Sheamus get their mic time on the mic now. Poor Cesaro gets his most mic time in the WWE with broken teeth. Miz tries to sell us on on them being a “family.” He finally calls out Strowman. He is unhappy about being Triple Power Bombed. He tries the same tough guy material but crowds aren’t eating it up. This turn on a dime for Reigns/Strowman is one of the craziest crowd things ever. Angle tells The Miz not to bust out the same material as last week. It actually flustered the Miz for a moment. Angle tells The Miz that if Strowman wins tonight, they get to add a fifth partner. If he loses, it’s a three one three match.

Sasha Banks comes out to take on Alicia Fox. She doesn’t get an entrance but does get an inset promo. Fox gets works over Banks. Sasha locks in the Bank Statement out of the blue for the quick tap out victory. Moving along then. Sasha starts an interview back stage when Fox attacks her.

Enzo Amore comes out. People are still doing the entrance schtick. He’s pissed that he got robbed of his championship. He’s angry at both Kalisto & Mustafa Ali. Kalisto speaks Spanish then goes English. He tells Enzo to blame anyone he wants. Enzo has a bigger pile of cash than Kalisto is tall.  Noam Dar, Tony Nese, Drew Gulak & Ariya Daivari come in and attack Kalisto. Ali comes in and tries to clean house. He loses momentum eventually. Nese takes out Kalisto with a running knee. Ali gets a short armed clothes line. Enzo makes Kalisto Eat The Feet.

Dean Ambrose & Seth Rollins come out for their match with Sheamus & Cesaro. The Shield starts off hot. Rollins & Sheamus butt heads to get the tide on The Bar’s side. Even Graves is making comparisons to Dragonball Z with The Bar. Their power up screaming at each other was another nod to the show for sure. Super Uppercut by Cesaro only gets Sheamus a two count. Sheamus runs himself into the post. Rollins doesn’t quite get to Ambrose. Cesaro stops him for a moment. Ambrose gets the hot tag in. They tease the catapult spot and go through with it. Cesaro jumps to the middle ropes however. Ambrose gets a spring board version of a Hart Attack. Rollins makes the save. Rollins pulls Ambrose out of a double team. Rainmaker Knee on Sheamus. Dirty Deeds DDT on Cesaro for the win.

Curtis Axel is talking to Sheamus & Cesaro about being the fifth member of the team. He gives Braun Strowman a motivational speech which was pretty damn funny. He gets sent off to confront Roman Reigns.

We get a replay of Sister Abigail. I don’t like it any more this week. Finn Balor comes out and educates us on Irish tales. He is ready to slay a monster with a demon of his own. Balor is going with a Halloween color scheme. Nice.

Emma comes out first. Alexa Bliss is next up. Mickie James is up next. She picked Bayley as her partner. James starts off against Bliss. Emma gets in quickly though. Bayley gets her hands on Bliss. She has taken over on Emma after a break. Emma drops Bayley over the top rope. She follows up by kicking her into the barricade. Bliss work over Bayley. James gets the hot tag on Bliss. James misses a Mick Kick. James connects with a flap jack. Emma breaks up a pin fall. Bayley takes her out. Bliss takes out Bayley. Mick Kick for the win. I do wish James would get another title run but I really don’t see it happening after that outcome.

Curtis Axel walks up to The Shield and the WWE cameras go dark. The Miz gets informed that Axl went after them.

Charley wants to know about Mickie James wanting the championship or if she just wants revenge. She wants to take the title home to her son. She’s trying to make “Biscuit butt” a thing.I’m all for it.

The Miz joins the booth for the Roman Reigns vs Braun Strowman steel cage match. Why is Reigns trying to escape? He is a fighter and has been over the course of his feud with Strowman. Braun gets a near fall before the break. Reigns gets smashed against the cage which served him right for trying to escape again. Strowman runs himself into the cage. I’m not sure why Reigns is acting like he can’t pick up Strowman. He’s big but he’s not Big Show. Strowman Superplexes Reigns from outside the cage back inside. The Miz leaves as the tag teams fight to the back stage area. The Miz closes the door on them so that they stay outside the arena. Reigns tries to leave the ring again. Reigns crotches Strowman on the top rope. Superman Punch. Repeat. Reigns goes for the Spear, Strowman tosses him in the air. Reigns counters with a Superman Punch. Strowman kicks out. Kane’s music. Strowman crushes Reigns. He ends up countering into a spear. Kane comes out of the ring. He assaults Reigns. Running Power Slam by Strowman. Kane with a Tomb Stone. So is he being added because Reigns ended Taker’s career? Running Power Slam for the official win. I also take it Kane didn’t win his election? I can’t say I paid attention. – Kevin DiFrango