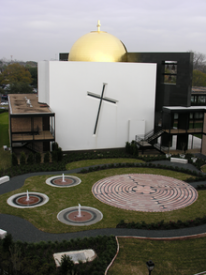 Chapel of St. Basil on the campus of University of St. Thomas in Houston TX. Designed by Philip Johnson.

The announcers are already annoying me by talking about a “landslide” win of Raw, which won exactly one extra match. Stephanie McMahon is out to bag on Shane McMahon. Kurt Angle‘s job is 1000% secure. I like that percent more than 110%. Both are fake, may as well up the ante. HHH comes out in a suit. He is followed quickly by Angle. Jason Jordan then comes out looking for a match with HHH. Stephanie informs us that he isn’t afraid of any man. Cue Braun Strowman, who gets HHH to slowly back away.

Samoa Joe vs Finn Balor gets to lead off the in ring portion of the night. Quite a way to start. Joe wins early with power. Balor kicks Joe off the top rope. It leads to a flip dive & commercial break. Joe is back in control though. Balor slips a Sling Blade into a lot of Joe offense. Joe goes for the Kokina Clutch but Balor rolls out of it. Balor labors his way to the top rope. Joe catches him. Joe re-applies the Kokina Clutch. Finn Balor passes out and loses. That is a nice strong statement for Joe.

Jason Jordan tells Angle that he’s hurt now. I love Jordan going towards being two faced. Jordan then talks himself up. Angle grins like an idiot.

Asuka comes out. Dana Brooke is her opponent because of their little tiff last week. Brooke gets an inset promo. I liked it, outside of the delusion that was involved in her being confident taking out Asuka. Brooke slaps  Asuka. She pays for her celebration of it with several slaps, spinning back hands capped with a round house kick. Kick to the dome for the win. Ichiban, number 1 blurts Booker. Um, Thanks for that, Book from Michael Cole. Hilarious exchange.

The Miz brings us Miz TV. He congratulates Baron Corbin on his win but also talks down about him. His guest is Roman Reigns. He is slow to come out. When he does, Dean Ambrose & Seth Rollins accompany him. They are feeling pretty frisky after last night’s win. The Miz says he wants a Thank You for getting The Shield back together. A “Miz is awesome” chant breaks out. Reigns tells Miz to thank Houston for the chant. Rollins confirms that him & Ambrose are staying together. Reigns wants a Title and takes aim at The Miz.  Bo Dallas slows everyone’s roll. Curtis Axel steps up when Dallas throws down a challenge. Axel gets Rollins and Ambrose’s finishers. Dallas gets the triple power bomb.

Braun Strowman talks to Charley. Strowman is glad Jordan isn’t afraid of him because everyone else is, including HHH.

Ambrose is ready to take on Sheamus, who is accompanied by Cesaro. Sheamus works over Ambrose, specifically his elbow. Ambrose gets out of a suplex which slowly gains him momentum. Ambrose fires back with clothes lines. Ambrose wrings out the arm afetr them. Sheamus gets knocked to the floor. Ambrose gets caught going for the suicide dive. It comes moments later on the other side of the ring. Ambrose heads to the top. CEsaro distracts him. Sheamus gives Ambrose a rolling senton from the middle rope. Ambrose barely kicks out. Rollins runs into the ring and takes out Cesaro. Sheamus gets distracted. Kick to the gut, Dirty Deeds DDT for the win.

Jason Jordan asks Matt Hardy for pointers on Strowman. Hardy confirms that he’s a monster. Hardy tells him that he’s learned that some nights just aren’t your night. Quite a warning.

Alexa Bliss is not happy how last night went. She’s not going to let last night hold her down. Mickie James is back in her grill. She is still getting Biscuit butt over. Bayley wants a crack at the Championship. So does Sasha Banks because we haven;t gone long enough with a multi-woman championship match. Alicia Fox wants an opportunity because she choose the women’s team at Survivor Series. Bliss doesn’t think any of them deserve a chance. The ladies have a match for the chance to battle Bliss.

The match is all action. All the ladies are down when Paige shows up. She’s back. Hopefully, she’s not drinking as much. Paige warns that she didn’t come alone. She comes down to the ring. Mandy Rose & Sonya Daville are her accomplices. More women should help the division develop a hierarchy. Renee Young runs into them back stage. Alexa Bliss tells them that they don’t need to answer her questions. They don’t seem to like her in return. They decide to beat her up in fact.

Caught up in time to watch Jason Jordan getting whooped by Braun Strowman. Jordan slaps Strowman then ducks out of the ring. Jordan tries to power Strowman into the corner when his leg gives out. Jordan falls out of a power slam attempt and “tweaks” his knee. Before his integrity to be questioned too much, Kane attacks for a DQ. Kane assaults Strowman witha  chair. Kane even slams Strowman’s throat on a chair off the ring steps.

Corey Graves continued hatred of Enzo Amore will always bring me amusement. He talks up Noam Dar, Tony Nese, Ariya Daivari & Drew Gulak. Rich Swann, Cedric Alexander, Mustafa Ali & Akira Tozawa come out. Booker T makes fun of Michael Cole for “not expecting this” which was an eight man brawl. It’s what 205 Live does best. Not focus on anyone. The match wasn’t any better either. Even if Mustafa Ali got to finish it off with an inverted 450 for the win.

Jason Jordan whines about his injury. Kurt Angle buys it. The Miz wants out of his match. Angle is still buying Jordan’s lies. The Miz is still going to have his match.

Elias has lost his last name. After another awful song, Matt Hardy comes out. I must have missed this match on the pre-Survivor Series card. Elias flees the assault.

Roman Reigns is taking it to The Miz early in the going of the match. The Miz caught Reigns with a kick as he went for a Superman Punch. The Miz starts to wear down Reigns. The Miz is now doing the Daniel Bryan corner drop kicks. So, is he coming back for a match? Miz Kicks now. Miz misses the last one. Samoan Drop for a near fall. The Miz takes out Reigns knee to stop another Superman Punch. Miz gets another near fall. Miz comes off the top rope. Reigns finally connects with the Superman Punch. Miz kicks out. Sheamus & Cesaro distract Reigns. Skull Crushing Finale. Reigns kicks out. Ambrose & Rollins make the save. Spear. Reigns is new Intercontinental Champion. – Kevin DiFrango