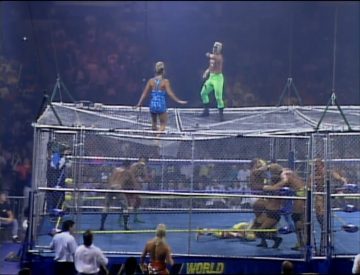 Kevin & Shahid are here to give you a Survivor Series preview. Did Shahid get tickets to the event or not? How good does this line up look? How was Raw‘s version of “Under Siege?” Even if you don’t believe the animosity between the brands, hasn’t the WWE written this angle to support the animosity? How is it that no one is upset at HHH coming into a match over an up and comer like Jason Jordan? Didn’t Stephanie McMahon have a point that Kurt Angle could have chosen John Cena over his son? What did Jordan do to deserve this atrocious booking? AJ Styles winning the WWE Championship has helped to make the card better. Does anyone that listen to the show plan to propose to their future wife during a Paul Heyman promo? How badly is The Miz running circles around Baron Corbin? Which match will be better, The Usos vs The Bar or New Day vs The Shield? How small would the Young Bucks look next to any of these tag teams? Doesn’t the Charlotte vs Alexa Bliss match look better than Natalya taking on Bliss? How surprising was it for Ric Flair to show up after Charlotte’s victory? Shahid has been watching more of NXT than Kevin so he gives the card for War Games a run down to finish up the show. So click on the link below for all your WWE review greatness!