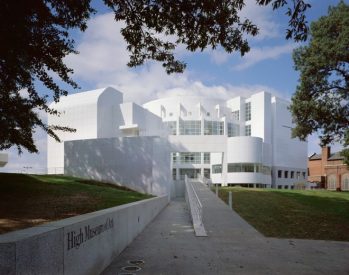 The High Museum of Art in Atlanta designed by Richard Meier. Saved from meier.com

Under Siege is re-hashed again. Stephanie McMahon comes out. Then Kurt Angle. Of course, she’s here to dress him down. Naturally, she picks on Angle about picking Jason Jordan. She compares him to John Cena as the fifth member. She wonders if he let Cena slip through his grasps. She even gives him grief about his in ring capabilities now. Just when it appears that Stephanie is going to fire Angle, The Shield comes out with Roman Reigns. Dean Ambrose is the first to get the mic. They give their endorsement to Angle. Stephanie then gives them grief for losing the Tag Team Titles. They challenge New Day. Can this card get any better? This is the first time in years that Survivor Series is living up to the Big 4 billing.

Bayley is “upset” about not being on Team Raw already. She gets no mic time. Sigh. Mickie James is undefeated at Survivor Series. Dana Brooke is still on the roster. Here’s to hoping that she has improved since the last time I saw her. Brooke’s big moment in the match is clocking Asuka. She ends up spin kicking Brooke. Bayley & Mickie have done the majority of the match anyway. Bayley to Belly for the win.

Enzo Amore and his new partner Drew Gulak come out. Enzo is ready to defend his belt at Survivor Series. Gulak doesn’t like the chants of either Akira Tozawa or Kalisto. The four have a match. It picks up when Tozawa hits a suicide dive on Enzo. Kalitso flip dives onto Gulak. Gulak saves Enzo from a Tozawa Senton Bomb. Enzo tosses Tozawa into Kalisto. Eat Da Feet for the win.

Kurt Angle really should have pointed out Samoa Joe & Braun Strowman aren’t matched on the Smackdown Live side of the SS team. His team all get matches later tonight to prove their worth.

The Miz has got his TV Show going. He gets to run down Baron Corbin’s mic skills again. Miz points out the Corbin wasn’t even on SDL last week. Wow, he is just killing on the mic right now. Only Paul Heyman has a longer streak of great promos. He invites out The Bar, Cesaro & Sheamus. They were not distracted by New Day. I’m serious, are they going to leave in that mouth piece a la Bob Orton wearing the cast longer than needed? They’re going to “Jail Break” the Uso Penitentiary. The Miz closes by saying that the feel good story of The Shield Reunion ends tonight.

Bray Wyatt helps me play catch up with how long his entrance is. Jason Jordan is his opponent. I’m surprised that Wyatt is being used as enhancement talent in a one off match. Jordan drives Wyatt into multiple corners. Overhead throw suplex. Wyatt is in control after the break. Wyatt pauses for Sister Abigail. Jordan rolls up Wyatt for the win. Wyatt attacks Jordan. He slams Jordan’s leg into the post. A “Thank You Wyatt” chant breaks out. Still don’t know what Jordan did to deserve this either way. Jordan wants to stay on the team despite the injury. The attack honestly wasn’t enough to warrant being pulled.

Brock Lesnar comes out with Paul Heyman. He hypes Survivor Series. Lesnar & Styles may never wrestle again so get SS. Heyman can even kill distractions like “She said yes.” Bunch of idiots. After breaking down Styles in complimentary terms unlike Jinder Mahal. Styles doesn’t have a chance against The Beast despite his Rocky story.

The Shield takes on The Miz, Cesaro & Sheamus. The announcers bicker about what bearing this match has on SS. Dean Ambrose clocks Curtis Axel then chases off The Miz. The Shield has had their way so far. He did make his way back to let the heels gain the advantage. Reigns gets the hot tag and gets to clobber Cesaro. Reigns gets distracted by The Miz. Ambrose takes him out but Cesaro takes advantage. Rollins suicide dives onto Sheamus. Cesaro gets distracted. Superman Punch. The Miz tags in blind from Reigns. They surround The Miz. Spear. Triple Power Bomb for the win. I do fully expect New Day to take the L but looking forward to the match.

Kane is still happy about what he did to Braun Strowman. He’s going to show him there are worse things than death.

Kurt Angle wants to replace Jason Jordan. He gets a big statement that is just not hitting home, even though it’s supposed to. When people cheer Stephanie McMahon, you know your angle isn’t doing what it was intended to. HHH comes out and announces himself as the fifth member of Raw. It would explain him wrestling internationally a lot recently. Seriously, how stacked in SS? HHH Pedigrees Jordan for extra emphasis.

Poor Luke Gallows & Karl Anderson get to lose to Samoa Joe & Finn Balor. It shocked me when I realized this was the main event of the show. They play nice and win the match. Joe even gives up the win to Balor. Coup De Grace for the victory. Oh, it isn’t the finish. Thank goodness.

Alexa Bliss is mad that her opponent isn’t determined. She even muses about showing up to SDL to watch the match.

I only tape 5 minutes later than the show runs. I’m getting the feeling I may miss the end of this match between Kane & Strowman.I didn’t. I got the slam through the ring. Cool spot but doesn’t exactly hype SS. – Kevin DiFrango