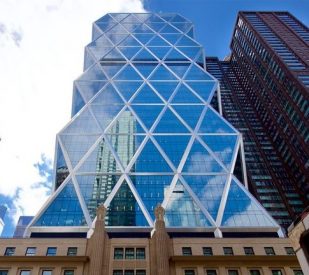 Hearst Tower in Manhattan since Brooklyn is short on cool buildings too. Designed by Norman Foster & Partners, Gensler and Adamson Associates. Saved from Expedia.com

I usually pre-write that the WWE starts us off with a video package. I imagine that it’ll be extra long today since this show is the 25th Anniversary of Raw. Actually, Jerry Lawler & Jim Ross are broadcasting from the Manhattan Center from where the original Raw was broadcast. Holy smokes, Michael Cole has been on 21 of the 25 years? I’m not as surprised by Booker T‘s 17 for some reason despite him being a WCW guy. Shane & Stephanie McMahon are in the ring. Shane does a great job of thanking everyone who helps get Raw on air and of course the fans. Now I get my video package. A lot of it is the a Remixed Top 25 show which I did watch this past weekend. It was a solid representation of the good years. Stephanie pausing after saying Vince McMahon literally helped conceive them killed me. The look on her face cracked me up. It was almost as if she was expecting a reaction from Shane. Vince acts like he doesn’t want the spot light. Why are they giving him a plaque for 25 years of Raw? It’s not beautiful. Ahh, it’s just a gag so he can be upset. Steve Austin has heard enough of the yelling. As Jeremy Maes pointed out to me prior to viewing, Austin has a new shirt. He was the merch king. Vince tries to talk down the angry Austin. Vince throws Sahne under the bus. Shane gets suckered in. Stunner. Vince offers Steve a Miller Lite. Austin gets some on Vince’s suit. They hug. Austin lets him think he’s going to get away. Another cheers. Stunner. Shane gets a second Stunner since he got up while Austin was getting some more Steveweisers.

Bayley, Sasha Banks, Mickie James & Asuka are teaming against Nia Jax, Alicia Fox, Mandy Rose & Sonya Deville. Jax initiates the brawl to jump start the match. Banks and Jax square off shortly after coming back from the break. Alicia Fox continues the beat down. Corey Graves making the smart observation that big doesn’t equal winning the Rumble. Another commercial. Bank Statement while the other six brawl on the outside. Weird timing for the finish since it was immediately after the break. Asuka takes out her team mates to make a statement. I like it.

Kurt Angle gets to see Jonathon Coachman, The Brooklyn Brawler, Teddy Long, Brother Love and the Boogeyman. That dude is still in pretty good shape considering he was old during his first tour.

Video package for The Undertaker over the years. The crowd at the Manhattan Center finally peps up because Taker is there. He’s always done a great job with changing up the imagery of his character. They’re not major overhauls but tweaks here and there. I’m not sure if he’s coming back for another match or not. I’d be all over a Matt Hardy vs Undertaker crazy gimmick match.

The APA is gambling with Heath Slater & Rhyno. Ted DiBiase knocks on the door. He drops a giant hunk of bills and gets dealt into the game.

Old GM are announced so that Daniel Bryan & The Miz can have a stare down. John Laurenitis did have an outstandingly obnoxious red, white & blue suit including some white shoes. Brooklyn boos Roman Reigns. Bo Dallas & Curtis Axel are at ring side sure to cause some shenanigans. They do so early in the match so that Miz can take control. Reigns is back on the offense after a break. Reigns misses a spear and hits the ring post. Miz rolls him up and uses the ropes but Reigns kicks out. Reigns turns the Miz kicks into a power bomb. The Miztourage gets hit with a Drive By. Reigns eliminates them. Superman Punch only gets a two count. Dallas holds onto Reigns leg, which allows Miz to connect with the corner clothesline. The ref tosses Dallas & Axel. They come back anyway. Shouldn’t that be a DQ? Skull Crushing Finale only gets a two count. Reigns misses another Spear and runs into an exposed turn buckle. Skull Crushing Finale again for the win.

MVP has joined the card game. His suit game has always been on point.

Christian is ready to host The Peep Show. Jason Jordan & Seth Rollins are his guests. Jordan kept getting booed like crazy no matter what he tried to say. He comes off so smarmy and it’s awesome. Sheamus & Cesaro interrupt him. Everyone wanted their pictures with The Bar today. Jordan starts the fight. Rollins accidentally hits Jordan with a Flying Knee.

Alexa Bliss gets mic time with Charley Caruso. Bliss isn’t just a champion, she’s a goddess. Charlotte comes in and towers over Bliss. Ric Flair is on her side now. Just getting people on TV for some of these segments. Good thing the Royal Rumble isn’t a big story line PPV.

The ads for the Mix Match Challenge are cool. I still haven’t taken the time out to watch the first match.

Even more people are in on the poker match. Dana Brooke gets to make fun of Heath Slater for losing.

Bray Wyatt is at the Manhattan Center too. So all the weird stuff is happening there, huh? Matt Hardy is his opponent. JR implies that this match won’t be the end of the feud. Sister Abigail for a quicker than expected win in my books.

The ladies of Raw were introduced. I blew through it to save time.

Elias runs into Chris Jericho back stage. Jericho plays a song for him. Elias made the List. Elias gets to strum in the ring. He’s dying because he’s trying to fight a crowd that is with him. They finally turn on him. Elias then picks on Jimmy Fallon. He then insults everyone famous. John Cena is the one to answer the call. Elias is upset that Cena ruined his time with the crowd. Cena tells him to do something about it. Elias doesn’t take orders from Cena. He then tries to cheap shot him. Elias gets the Five Knuckle Shuffle. Cena goes for the Attitude Adjustment. Elias slips out and low blows him. Guitar over the back. Drift Away to cap things off.

Ron Simmons finally gets in a “Damn” when DiBiase wins all the chips. And a pancake since New Day was there.

Heath Slater & Rhyno have a match against Titus Worldwide. Slater is getting more air time than Vince McMahon tonight. The Dudley Boyz break up the match. Slater gets fed to the Dudleyz. Whattsup. Graves wants to rename it “Dilly Dilly.” I approve.

AJ Styles introduces “Mean” Gene Okerlund. Why they needed to kick out Charley is odd to me. Just throw it to Gene. Everyone pops. Styles is better than Kami. He knows he needs to hit them hard and fast.

Degeneration X tries to do a regular segment because they are PG now. Shawn Michaels is the one getting censored. HHH then thanks people who are no longer with us that aided their act aka Rick Rude & Chyna. Road Dog comes out and does the introduction for himself & Billy Gunn. Road Dog gets to introduce X Pac. He gets to introduce Scott Hall. The show has been “Too Sweet.” Balor Club comes out. They all Too Sweet each other. Scott Dawson & Dash Wilder hit the ring. The Revival jump Luke Gallows & Karl Anderson early. Magic Killer for the win. Scott Dawson gets to be beat up by DX. Dash Wilder gets up to receive Sweet Chin Music & a Pedigree. Coup De Grace to cap it off. Suck It.

Kurt Angle brings out the locker room so that Braun Strowman, Kane & Brock Lesnar can be introduced. Paul Heyman introduces the later of course.Lesnar comes out looking for a fight. The locker room scatters and allows a brawl to break out again. Strowman power slams Lesnar through the announce table. Usually a bad sign for the person handing out the beat down. Reigns vs Lesnar in New Orleans everyone. – Kevin DiFrango