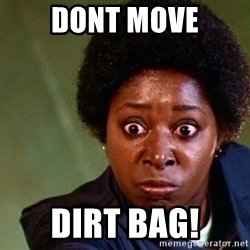 Saved from memegenerator.net. From Police Academy.

Chris & Kevin are up to their eye balls is professional wrestling news this week so naturally they start off talking about the gentleman formerly known as Enzo Amore. Why did he get fired even though the police haven’t formally charged him?  Could his timing have been worse with multiple outlets talking about Raw 25 when the news broke? Is 205 Live cursed? The guys do end up talking about Raw 25 and wonder what the people that bought tickets for the Manhattan Center were expecting? Did they not know it was a two venue show? How bad does that venue look when it’s fully lit? Are the nostalgia acts wearing thin since it’s the same people coming back for every anniversary occasion? Weren’t all of the nostalgia acts down hill from the opening Vince McMahon and Steve Austin skit? Would Raw have made it to 25 years had it not been for that feud? Did they properly hype the Royal Rumble? Is Roman Reigns the odds on favorite to win the Royal Rumble? If him taking on Brock Lesnar at Wrestlemania is a foregone conclusion, what’s happening for Smackdown Live WWE Championship? Does an advertisement for in the Columbus market for Fastlane hold any clues or could it be a red herring? What else is there to talk about? Find out when clicking the link below, dirtbag!