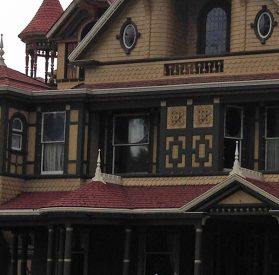 The Winchest Mystery House. Picture saved from their website.

The WWE starts us off with John Cena. Where’s my video package? You’re ruining the start of my column. He’s ready to win the Elimination Chamber because that’s his only path to Wrestlemania. The Miz comes out with Curtis Axel & Bo Dallas in tow. This year is the Year of the Miz. He’s going to win both Championships at WM. Cena laughs off the idea of Miz beating Lesnar. He beat Roman Reigns so he knows he can beat Lesnar with his brain. The Miz reminds Cena of his win over him at Wrestlemania. Cena wants a match with The Miz. The Miztourage attacks. The Miz then asks to start the match. Kurt Angle comes out and confirms the match. He tosses Dallas & Axel from ring side. Angle is still an ass by starting the match.

Since the majority of this match is after an early break, it’s getting it’s own paragraph. The Miz is wearing down Cena because of the pre-match beat down. The Miz keeps the beat down going thru the next break. Miz has the Figure Four on. Cena reverses it and into an STF. The Miz hangs Cena out to dry. Miz DDTs Cena. AA out of nowhere. The Miz kicks out. As he should. The Miz puts on the Figure Four again. Cena reverses into a Cross Face. Skull Crushing Finale. Cena kicks out. Miz goes for a Top Rop SCF. Cena reverses into a Middle Rope AA for the win. Always funny when Jojo gets to rub it into the Miz by reminding him that he enters the EC first.

Matt Hardy has to beat Apollo Crews, Finn Balor and Bray Wyatt to become the last person in the EC. He will obsolete his opponent then turn the EC into the Deletion Chamber.

Karl Anderson & Luke Gallows get a nerd-o-meter for The Revival. Gallows wants a crack at them tonight since Balor had the fun a couple of weeks ago. Scott Dawson & Dash Wilder attack from behind. Anderson & Gallows gets to recover before the match. They get the upper hand. Another chop block to Gallows left knee gets things to swing in the Revival’s favor. Anderson gets the hot tag. Gallows drags Dawson outside but Dawson tosses him into the stairs. Wilder rolls up Anderson and grabs the tights but Anderson kicks out. Spinebuster by Anderson gets two. Anderson fights off both of them but doesn’t notice Dawson tagging in. Shatter Machine for the win.

Kurt Angle comes out and announces that Jason Jordan is out of Wrestlemania. People boo so he tells them to have a heart because any wrestler who misses WM, has it tough. Seth Rollins comes out and pleads for inclusion for the match tonight to qualify for the EC. Angle appeals to the crowd, they want him in there.

Bray Wyatt steps out from fog. No one deserves a second chance. He is going to win the EC two years running then slay The Beast. I’m pretty sure you’re not getting the chance.

Sasha Banks & Bayley are going to fight in San Jose. Unfortunately I have seen the result of this match or else I would have gone with the home town girl losing theme during the match then been wrong. Corey Graves bagging on Sasha Banks is consistently cracking me up. It’s helping her seem more heelish, which is a good thing. Banks mocks Bayley who then drops Banks for a stiff clothes line. Coachman alludes to the Booker T feud which further cracks me up. Michael Cole then calls this a rivalry which undermines his own point of them being friends. Bayley misses a top rope elbow. Banks gets on the Bank Statement. Bayley flips Banks into the middle turn buckle. Banks catches Bayley charging in. Sasha goes to the top. Banks fights her off. Bayley jumps back up and gets a middle rope Bayley to Belly for the win. Good match. Not given the time to be great. Bayley & Banks go face to face. Nia Jax smashes both of them. Charley asks why Jax did that. She’s proving a point. She’s better than Asuka. Jax says she’s the only one who can break the streak.

Roman Reigns & Seth Rollins bust balls. Sheamus & Cesaro calls Rollins a lousy partner. Reigns asks Cesaro what happened to his mouth. He reminded him it was the Shield. Reigns steps up to Sheamus. The Bar coolly walk away.

They are really hyping Asuka’s streak. The WWE did a great job with this video package.

Titus O’Neil ends up interviewing Apollo Crews. He has an answer to all of his opponents. One small step for Apollo Crews, a giant step for Titus Worldwide. They are entertaining.

Mickie James is wondering why Alexa Bliss is being all friendly to her. She arranged the match with Angle. Bliss really can pour on the compliments. She even goes to the mom well. Bliss knows they’re all screwed if Absolution wins at the EC. James is fine with teaming but isn’t buying the rest of the BS. Their opponents are Mandy Rose & Sonya Deville with Paige at ring side. James & Bliss work together early even if they’re leery of each other. For some reason, Graves calls an Abdominal Stretch a unique move. Paige distracts Bliss. Deville drops her face first onto the apron. Angel’s Wings for the win by Rose.

Elias comes out and does the usual before playing the EC Blues. Braun Strowman comes out on the stage. He pulls out a stand up bass. He sings about how Elias won’t win the EC. After this song, Elias is going to “Get These Hands”, which people are now chanting. They both put down their weapons. Elias tries to get the jump on him. It fails. Strowman power slams him. Elias crawls away. Strowman decides to crush him with the bass. Strowman is still awesome.

Finn Balor doesn’t care what anyone wants. He wants to win the EC match. He wants what he never lost, The Universal Championship.

I thought this was going to be a tag match. It’s just Reigns vs Sheamus in a singles match. Cesaro is at ring side. Reigns jaws at Cesaro which costs him. Reigns tries to rally but gets tossed into the ring post. An Irish Curse Back Breaker only gets two. Sheamus locks in a Cloverleaf. Reigns kicks off Sheamus. Reigns goes for a Superman but gets caught. White Noise for two again. Sheamus sets up for Brogue Kick. Superman Punch instead. Sheamus tries to leap Reigns. Powerbomb by Reigns. Cesaro distracts Reigns again. High Knee by Sheamus only gets a two. Sheamus complains to the ref. Reigns slips outside for a breather. He eliminates Cesaro. Sheamus stops a Drive By with a clothes line. Sheamus goes up top. Reigns Spears him on the way down for the win. I enjoy watching those two wrestle.

Ivory is the newest member of the WWE HOF. I will always love her for giving Michael Cole a hard time on the Wrestlemania pre-show.

The Fatal Five Way match is the main event. The match is fast and furious. Lots of fun spots happening. I love that the words “Drop Zone” must be used for the Coup De Grace. Rollins Stomps Balor after a string of finishers. Crews makes the save of all people. Crews is getting to show off more recently. Sister Abigail to Hardy on the outside who is seemingly eliminated. Tower of Power on Wyatt and Crews. Balor & Rollins make the pin on Wyatt to come to a terrible conclusion. I guess they need a main event for next week. These two for the last spot. – Kevin DiFrango