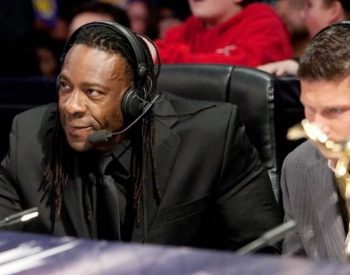 Courtesy of the WWE for Forbes.com.

Chris & Kevin are in the saddle this week and they start off by talking about the Booker T vs Corey Graves feud? This angle can’t lead anywhere in ring so is it a real problem between the gentleman? Wouldn’t Vince McMahon have to OK demoting Booker? Wouldn’t Michael Cole also have more weight in announcing matters than Graves? How funny is it that the WWE supplied a picture to Forbes about this matter when Booker was announcing with Josh Matthews? The guys move along to talking about the product on screen.  How big was it for Elias to get a pin fall victory over John Cena? And technically a win over Braun Strowman? Will he win the Elimination Chamber? How amusing was it when Alexa Bliss called out Brock Lesnar‘s privilege in not having to defend his Championship in the EC? How was her comeback for Kurt Angle when he mentioned her lack of Championship defenses? Will the women’s divisions on either show have a direction until the WWE decides what to do with Ronda Rousey? Will Asuka beat Nia Jax without her slipping on the proverbial banana peel? Why is Seth Rollins having such a hard time keeping healthy tag team partners? Do your hosts want to see him wrestle The Bar any more? How interesting is it that Smackdown Live is building up both the Bludgeon Brothers and rebuilding Shelton Benjamin & Chad Gable? Will the Usos finally get on the main card at Wrestlemania? Chris & Kevin have this episode locked down, so go ahead and click the link below.