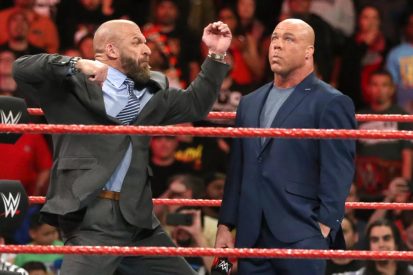 Whoever does the photography for the WWE is fantastic at their job.

Chris & Kevin are here to talk about the shoot promo that wasn’t really a shot promo by Roman Reigns about Brock Lesnar’s absence from Raw on Monday. At a minimum, Paul Heyman is not going to miss a date for the WWE because that is who puts money in his pocket, not his client Brock Lesnar. Will this line of thinking keep Reigns over with the fans? Did the picture with Dana White help to sell this angle? Will Lesnar actually go back to the UFC for a fight or more? The guys move along to talk about all the ladies of wrestling starting with Bayley finally getting a spine and brushing off Sasha Banks this past Monday. Is this just what her character needed? Didn’t her helping Asuka confirm her still positive motives? Will Asuka end up on Smackdown Live to take on Charlotte to avoid being in a three woman match with Alexa Bliss & Nia Jax?It is all but official that Ronda Rousey will not be occupying one of the women’s title match with her continued spat with Stephanie McMahon. How full time will Rousey be and when will she be able to have a main event length match? Is this type of match best for all involved including Kurt Angle and HHH? Will John Cena continue his losing streak at Fastlane now that he’s in the main event? Is there still a chance that he takes on the Undertaker despite him saying it won’t happen on Raw? How many people are really looking forward to that match? How much is Kevin looking forward to seeing New Day vs the Usos at Fastlane? What else do the guys talk about? Click on the link below!