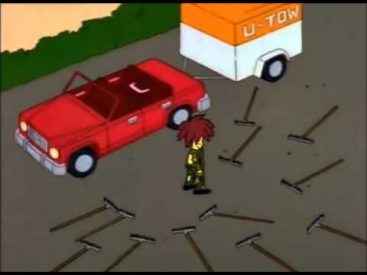 Sideshow Bob trying to avoid stepping on a rake

Kevin & Shahid did a show so that must mean that Roman Reigns cut another dumb promo. Why does the WWE keep giving him such terrible material? Does anyone really care that Brock Lesnar is being treated special? Is it really news to point this out since he’s been back with the WWE for years now? Does Lesnar’s entrance lose a little bit of punch without the fireworks? Why is John Cena calling The Undertaker a broken down old man then challenging him? Is Braun Strowman really going to take on The Bar by himself? Who took a worse bump this week, Xavier Woods on the stairs or Shane McMahon on the backstage ladder? Why does Shane feel the need to put his body through this much pain? Did the Bludgeon Brothers finally come off as bad asses after that assault? Why did the WWE name their women’s battle royal after the Fabulous Moolah when they have lots of other women that they could name it after? Does the WWE really want more main stream attention with all of the skeletons that performs from the past mostly have in the closet? Did Alexa Bliss‘s promo on Nia Jax cross the line from being funny asshole to just mean spirited? How hard would that promo to be since they are good friends back stage? How much time will Asuka and Charlotte get with all of the other big matches on the card? How much are the guys looking forward to Matt Hardy having a WWE budget to use at the Hardy Compound? Are either of the hosts going to attend a Hall of Fame induction again? Is this year’s class particularly weak? Where could Kevin see Jeff Jarrett in the near future? What else do the guys talk about? Find out by clicking the link below!