You are here: Home › WWE News › Maryse Injured; Will Still Get Naked 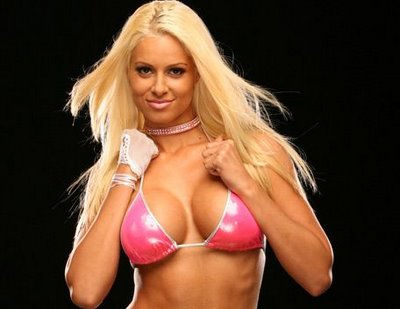 Newly crowned WWE Diva’s Champion Maryse Oulette was injured this past Saturday at a house show in Raleigh, North Carolina according to WWE.com. She dislocated her knee during the bout and remarkably did not tough it out like the rest of the he-men in the company according to this report on ProWrestling.net. She simply fell to the mat in pain and allowed someone else to do what was right for business. For those of you who do not know who Maryse is due to MyNetwork TV’s awful affiliate availability, she is the incredibly hot blonde that started off as the commercial girl for WWE Smackdown. Then she appeared on TV and then became a wrestler after some time in Deep South Wrestling. We here at Stunt Granny wish Maryse a speedy recovery and pray that this injury will not interfere with her seemingly monthly lay outs Playboys specialty magazines. Really though, Playboy isn’t all about the vag like it should be, so they can do a bunch of knee high shots featuring her airbrushed hairless cooter and beautiful hard fake taters. -Jeremy

5 Responses to “Maryse Injured; Will Still Get Naked”