Like I did with Evan Bourne and Kofi Kingston, these shirts from TNA don’t have enough design effort is put in them to merit their own articles. I guessed that the WWE didn’t want to be putting too much effort into shirts with young talent. TNA doesn’t really have the excuse because all three of these shirts are from WWE retreads: Taz, Sheik Abdul Bashir and Tara.  They all have a fan base that would love to snatch up a shirt since their commentator or wrestler jumped to the “competition”.

Let’s start with our good buddy Taz who got to drop a “Z” in the company switch. The shirt uses the black and orange colors that Taz has been known for since he started wearing boots. Stumpy is making the normal dumb face that nearly every TNA model wears and is pointing towards the shirt. I hope we all realize that FTW is ninny for “Fuck The World”. Considering that a majority of fans are disconnected from his days in the original ECW, people don’t know the background on this aspect of Taz’s character. He doesn’t want that any more because his protege, Samoa Joe, did the exact opposite of what that original character would have done and joined a powerful group to help him out, even though they’ve done squat for since then. His chummy persona and minor distancing from Samoa Joe since he has joined the broadcast team has only made “Fuck the World” all the more laughable.

On the back of the shirt, “Survive” in orange is arched above a white circle that is framed by a thick orange line. The number “13” is created by negative space showing the black of the main part of the shirt. There are also five bullet holes which refers to his upbringing in Red Hook. The problem I see with that is he hasn’t reconnected with that part of his persona in TNA and hadn’t talked about Joey Numbers for years as an announcer for the WWE. Underneath the ball is the ending of his mantra “If I Let You” which again is nothing that he has referred to in years.  Only in this picture do you see “Red Hook, NY” which is outlined in silver for some reason.  Why add that random color?  You could have used white and connected with the ball. This shirt is a little more complex than I had imagined from seeing the front, but it still has too many holes to make a lot of sense.  It keeps with Taz’s long running nature though so I can’t bash it too much.  I’ll give it a thumbs in the middle.

I may not have been able to bash the last one, but this one should be pretty easy. Let’s take a look at the front of the shirt. My favorite color is orange but I’m not going to buy this piece of garbage. Would it have killed the camera man to tell Bashir that his right wrist tape was falling off?  It’s seriously just text with the oh so creative number of 24(HR)7(Week)365(Days)TNA(Ugh.) I’m full amused by the following this picture though (here).  The next picture is what they should go with all of the time, which is what the WWE does all of the time – an action shot of them either in the ring or coming to the ring. The wrestlers just look more natural in these shots.  The last picture is kind enough to show us the back of the shirt which is equally dumpy. It also includes cross hairs on the front of the shirt which aren’t there in any of the other pictures. This shirt should be flushed down the toilet like a Koran was at Guantanamo Bay. 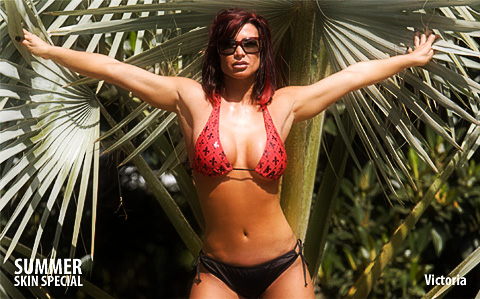 They're wasting her with that damn spider.

Last but not least, we have Tara’s new shirt. They show the front and back all in one photo with no modeling from this fine piece of woman. I’d much rather have her in dumb poses than Bashir showing off his possibly enchanced muscles that have popping pimples all over them. As for the shirt, wow, it sucks. Fuzzy gray text with barely red surround on a black shirt. The gray text doesn’t stand out and the red surround would help if it was brighter and there was more of it. If there is a picture in bewteen “Tara” and “Rizing” the picture is taken so poorly lit that I can’t make it out. On the back, “What A Tangled Web We Weave” is the statement which doesn’t make a whole lot of sense since it’s only Tara who is weaving the web so it should say I instead of we.

I hope you enjoyed that Poo Poo platter from TNA. I sure didn’t. – Kevin