You are here: Home › WWE News › Shape Up Or Ship Out 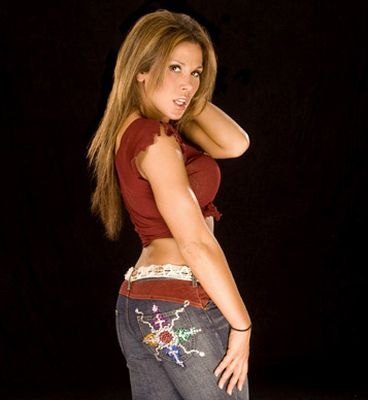 In something that has been floating around various message boards and was credited to pwinsider, Mickie James has been told “to shape up both figuratively and literally”.

Now, let me try to organize my thoughts here. First of all, Mickie is an absolute goddess who I could crawl across a desert of broken glass to earn the right to lick her boots. If anything, she could stand stand to gain a few pounds. She certainly doesn’t need to lose any weight. God forbid a woman doesn’t keep her weight in the sub-75 pound zone.

How much do you want to bet that Mickie will move on to a feud with the black hole of charisma, the Brian Lee of women’s wrestling, the ugliest “hot” chick in the history of the world Michelle McCool, while Melina will be wrestling Hornswoggle for 15 consecutive weeks? I hate wrestling so much right now. – Dusty