You are here: Home › Kevin's Blog › Misc. News › WWE News › A Night With @RealMickFoley and the Reverend Bob Levy 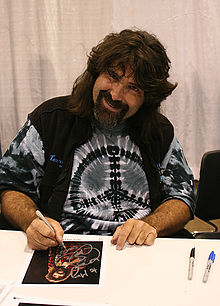 I got down to Woodlands Tavern around 7:15 PM for a 7:30 show. It was crowded especially the patio with the weather being a balmy eighty-eight. I had been to Woodlands before for a comedy show, Amy Schumer. For that show, I had to wait in a line to get into the bar, which operates while the comedy show is in a sectioned off with a full wall. It’s a good set up to have drinking business and a captive audience. I would say that the comedy room fits about a hundred and fifty people. I had enough time and room to grab a Great Lakes Rally Drum Red Ale before heading into the comedy room.

Blake something or other was the warm up for the show. He wasn’t very funny. He wanted us to follow him on Twitter but I’m not going to. I’m not terribly funny but I’d think that if I’d been working for about five years (like he said he was), I’d be better than this guy. Things were not off to a good start. Blake introduced Mick Foley, who it should be mentioned was on all of the posters for the event. I’m not going to blow up his act because that’d be uncool. I will describe the generality of his act though. The majority of his set was based around wrestling, so if you hadn’t seen him in the ring, your perception of the show had to have been crippled. Foley isn’t a rapid fire joke guy. He’s more of a story telling, fit in the jokes kind of a comedian. The bad thing about that is that earlier today on Opie & Anthony, Jim Breuer was on. Breuer is the king of this line of comedy. He can turn an ordinary story into something extraordinary. Foley turned some fun situations into something funny. He was very interactive with the audience too. That can be a problem sometimes and tonight was one of those nights. I’ve been to other comedy shows out at the Funny Bone in Easton. I think every other crowd I’ve been with has been more responsive to the comedians than tonight’s crowd. Foley got little help in that department. Mick ended his set by doing an impromptu segment, or so he said so I don’t mind describing it in more detail. A Metallica tribute band called One was playing after the second show which started at 10:15 PM. Foley recreated how Lynyrd Skynyrd came to have the hit Sweet Home Alabama. It was very funny but the guy in front of me was the perfect example of the crowd not participating. Foley wanted the crowd to lap along while he fumbled thru three wrong headed attempts at a verse. The dude in front of me clapped for the first try then moved to lightly slapping the table to then not participating by the third failed attempt. Was it one of the funniest things I’ve ever heard? No. Was it entertaining enough to clap along? Certainly.

The Reverend Bob Levy was the closer for the show. He was consistently more funny but he was plagued even more by the poor crowd. Levy had the lights pulled up so that he could see everyone but that didn’t help the crowd become more interactive. Early in his set, he noted that he’d become sober for two years. I loved the late Greg Giraldo, one of my favorites of all time, and he needed time to find himself after sobering up. Levy felt like he was on the same path. He was damn funny, but he didn’t slay.

All three comedians were out selling various items after the show as they had nearly an hour before the next show started. I didn’t take my copy of “Have a Nice Day” but many people did. I finished my third Rally Drum Red Ale while watching the line for signatures and pictures stay very long. I didn’t feel like waiting to get a picture because the show was good. I’d say it was worth the $25 I spent but I wouldn’t pay more than that. I fight a lot for what I deem good in this world that seemingly wants something to be utter shit or the most fantastic thing ever. It was a good, fun evening. If Mick Foley comes to your neck of the woods, go be entertained, it’s worth the money. -Kevin