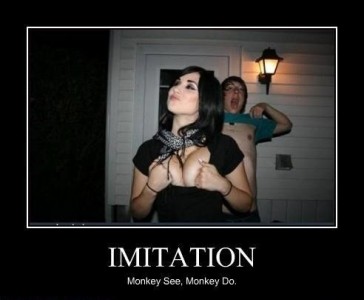 – My computer signed me out last night right as I tried to post this column and lost the last two paragraphs. I think they look better in their re-written form so I don’t care that this post is about twelve hours too late.

– James Storm and the Revolution are a terrible imitation of the Wyatt Family. The Wyatts have a uniform look. The Great Sanada & Manik are wearing the similar colors but entirely different designs. Storm wears something completely different all together. Davey Richards is still terrible on the mic which is why he never would have cut it in the WWE. Eddie Edwards is the better of the two talkers. The Revolution used their numbers advantage to beat down the Wolves after Richards told them he wouldn’t join. Storm then cashes in on a case that no one remembers because TNA has no continuity skills. Abyss is in The Revolution. They end up winning the World Tag Team titles. It is stupid to have this happen right after The Wolves end up winning the tag team series. Another reason it’s terrible is because the tag team in this faction should be The Great Sanada & Manik while Abyss is the enforcer and James Storm goes after the World Title, which should be a fantastic story because of his history with Bobby Roode.

– Madison Rayne and Taryn Terrell had a match. It was a solid match with Terrell winning. I’m surprised the WWE let her go. I remember she had an incident with Drew McIntyre. She quite attractive and as noted, a pretty good wrestler. The WWE could use her against either Paige or AJ Lee. Oh well.

– Manik talked to a new wrestler from India about joining The Revolution. TNA is already making this group entirely too large which is is exactly what they did with Aces & Eights. Congrats on making the same mistake twice. James Storm ended up booting out of the group before he could even join. Maybe they won’t make the same mistake twice.

– Kenny King continuing his feud with Chris Melendez is completely uninteresting to me. I love Melendez’s story but he isn’t a particularly good wrestler from the very little I’ve seen from him. Melendez did a decent job with his short amount of mic time.

– I’m not sure how many incarnations of The Menagerie vs The Bro Mans I’ve seen but it’s too many. Especially when it’s an elimination match. Rebel being in the final four of the match only made it worse. She is a terrible wrestler. You don’t need to show us once again that you’re very flexible. Being flexible doesn’t equate to in ring skill. It can be a tool in your arsenal but not thee arsenal. Crazy Steve and Jesse were the final participants. I do enjoy Crazy Steve as a wrestler so that was only a minor upside. I would have enjoyed it much more if DJ Z had been in there with him. Crazy Steve got the win off a  Tornado DDT.

– I have no idea why Eric Young went for a slam twice on Tyrus aka Brodus Clay. We’re not questioning whether Tyrus can be slammed like Andre The Giant. EY has proven himself smart enough at this point not to go for a move like that. Mike Tenay & Taz have sold him as a scrappy underdog type, which he is. He ended up beating Tyrus with a top rope elbow. For some reason, they had Bobby Lashley attack EY, including “breaking” his arm with it sandwiched between a chair. Austin Aries then made the save because he was “pissed too.” But no reason came forth. Terrible writing. Does EY need the break? He’s one of their few decent acts now that they’ve backed him out of the World Championship picture.

– I know TNA has actually built up the bad blood between Gunner and Samuel Shaw but it has been unconvincing at best. Brittany is over acting and the shrieking isn’t a good thing even if the announcers tried to make it sound like a positive. Shaw’s new handle bar mustache doesn’t do anything for his character either. He kept twirling it during the match. He’s changing psycho gimmicks more often than he should be. Gunner ended up winning the match. Which is another problem with Shaw’s character. He’s lost to Ken Anderson coming in his first feud and now this one. Shaw had potential but TNA has flushed it down the toilet as quick as they could.

– The main event was Bobby Lashley taking on Austin Aries. It reminded me of two recent events in the WWE. Lashley suplexed Aries about a half a dozen times to evoke Brock Lesnar beating up John Cena. Lashley then snapped at the end of the match and decimated Aries leading to a DQ win for Aries. It reminded me of Cena beating up Bray Wyatt. I didn’t enjoy Cena essentially burying Wyatt since it led to his exit off TV and the re-boot of his character. Aries doesn’t need to have his ass kicked like he did or a re-boot. Quit wasting one of the few great talents you have. While you’re at it, stop imitating the WWE. – Kevin