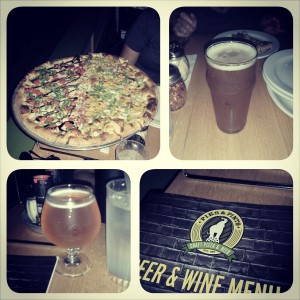 I’m going to review some local beers this week because I will be avoided them at the Columbus Winter Beer Fest. Plus, I have generally slacked on this column. Boo me.

Homestead Beer Co. – Tenpenny Amber Ale – Even though this beer has a low IBU of 35, I thought it was pretty hoppy. I’m not sure what it is with me and amber ales these days. The only thing I can think of is that the malt component isn’t that sweet. Maybe it’s the yeast that they crow about that throws me off. Or possibly it’s the fact that this beer is unpasteurized and never filtered. Whatever the case, I wasn’t too enamored with this beer. I do like to get all of the information out so this clocks in at 5.2% ABV. 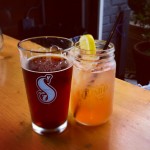 Seventh Son Brewing Co. – Mongrel Red Ale – Seventh Son used an experimental malt called Red X for this beer which helps to give an extra red color and a more full bodied flavor. They balance out the extra malty flavor by adding El Dorado, Amarillo and Simcoe hops. You certainly do get a flavor from the hops but it’s more floral than bitter. The sweetness of the malt helps to keep that portion at bay. To the right of my beer in the picture is one of the Lady’s favorite drinks in Columbus. It’s called a Mr. Pink and is quite delicious. 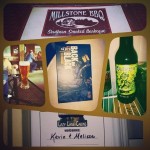 Sideswipe Brewing Co. – Fisticuffs – I got three different IPAs for IPA Day last year. The first one, Jackie O’s Mystic Mama, was enjoyed at a restaurant and has already been reviewed. 21st Amendment Back in Black is a favorite so I bought a nice twelve pack of cans of it. The last one I got was Fisticuffs from the local brewer Sideswipe. They feel like they have a nice balance of citrusy and bitter hops but my tongue disagreed. It was heavier in the bitter department but not to a complete overload point. They don’t list an IBU but they do tell you that it clocks in at 7.0% ABV. I’d say that has a little punch if you get into some fisticuffs. 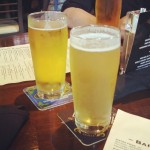 Wolf’s Ridge Brewing Co. – Beyond Measure Belgian Wit – For some reason, their website does not have this beer listed. It’s not on Untappd either so I get to review this one exclusively with my taste buds. As with any Belgian beer, this one had that special Belgian yeast flavor to it. Normally there is coriander in this style of beverage but it wasn’t very present. It did have the orange and a very mild bitter taste from the hops. It was light and refreshing which is exactly what you want out of this style of beer. – Kevin