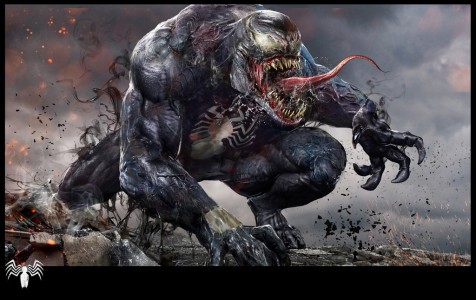 Venom from deviantart.com by Uncannyknack

Randy Orton comes out to polite applause. For some reason, The Authority thinks they can re-enlist him. Stephanie gets the first crack and doesn’t get the job done. The Big Show comes in second. Stephanie takes back over. HHH stares at him after everyone decided we needed another segment to set up his match with Seth Rollins.

Wade Barrett is taking on Dolph Ziggler. R Truth is on the head set. Holy cow, Truth beat Barrett on another program that no one watches. I have no idea why Michael Cole is so delighted with Dean Ambrose stealing the title. Why is Ambrose on worse footing than R Truth though? Shouldn’t Ambrose have beaten Barrett? The match is largely ignored until Ziggler’s drop kick leads to a break. By the announcers, not me. Ziggler turns Waste Land into a DDT. Oh no, they’re not planning a four man match for the IC Title for Wrestlemania, aren’t they? Please stop talking about Wayne Rooney. I watch the BPL and I don’t care about his Twitter fight with Barrett. Zig Zag for the win. Crap, this match is almost certainly on for WM. Dean Ambrose comes out. He taunted everyone with the belt and walked out. Yep, we’re getting this match at Wrestlemania.

I’m glad I could blow through the Sting recap. Seth Rollins interrupts Stephanie. She gives a speech about their unity. I love Rollins’s reaction when Stephanie says that he made the plan to take out Orton. Rollins & Orton begrudgingly shake. Orton & Rollins are taking on Daniel Bryan & Roman Reigns. Anyone taking bets on the announcers selling the wrong team is ready to blow up? (Next Day Note: Looks like I was wrong about a blow up too. For some reason or another, they’re milking a friendship that isn’t there. Why not have four weeks of hate to build this feud up?)

The Ascension get an inset promo to run down the Bushwhackers. Gives me another reason to re-post my brother and I dressing as the Bushwhackers for Halloween. They are taking on the reunited Prime Time Players. I hope they’re not back together to job to these guys. Darren Young gets the small package win after Titus O’Neil takes out the other guy. I still haven’t learned their names because the announcers are terrible at their job. Not exactly an encouraging sign for PTP.

Roman Reigns comes out. He’s happy to be going to Wrestlemania. Just when he is about to address his doubters, Daniel Bryan shows up. He was Reigns biggest doubter but he comes out and congratulates Reigns. He tells Reigns to beat the crap out of Lesnar. Paul Heyman then shows up. He also congratulates Reigns too. He starts to oversell Reigns against Legends of the business. Of course he can’t beat Brock Lesnar. Reigns says that Heyman’s doubts are fueling him.

The Usos come out to try and get the Tag Team Titles against Cesaro & Tyson Kidd. This idea never works. It gives us a good tag match on consecutive nights. The Usos toss Kidd onto the barrier gut first. Cesaro gets back dropped on the floor. Usos in control at the break. The Swing into the drop kick needs to be an every match happening. Jey gets things on his side by Kidd. The referee screwed up and counted a pin for Kidd. The announcers have to cover. Hahaha. Naomi takes Kidd’s legs off the ropes. Natalya crotches Jimmy to cause a DQ. Wrestlemania would be better with this match on it. How does Booker T think the Usos go to the back of the line? They just had a victory over the tag champs. Dumbest statement ever.

The Miz wants to win The Andre The Giant Memorial Battle Royal. Damien Mizdow thanks the Miz for letting him be his personal assistant because it has gotten him more recognition. Mizdow THEN has to lint brush The Miz. Bray Wyatt talks to a casket. It’s supposed to be creepy. Mitchell Cool makes the point that all this talk does no good without an answer from the Undertaker.

Stardust is taking on Jack Swagger. Welcome back Jack. Not really, but it sounds good. Stardust counters a Swagger Bomb. Swagger counters a spring board move into the Patriot Lock. Goldust comes out to the ramp. Swagger slaps on the Patriot Lock for the win.

John Cena comes out and complains by not complaining about his loss. He ends up calling Rusev a coward. Rusev did kick him in the nuts. A bunch of male announcers are acting like that doesn’t hurts. Rusev wants Cena to admit that Rusev is better. Lana tells us Cena gave up when he clearly didn’t. Cena challenges him to a re-match at Wrestlemania. Rusev doesn’t think Cena deserves a re-match. Good way to keep selling this match up. Randy Orton & Seth Rollins have a moment alone. Orton is okay for working toward a common goal. Even Seth is getting suckered in.

Emma starts against Brie Bella. Brie cracks Paige who is yelling at Nikki. X Factor for a Brie win. Paige super kicks Brie. Nikki takes out Paige. The Bellas are the best! Woof. 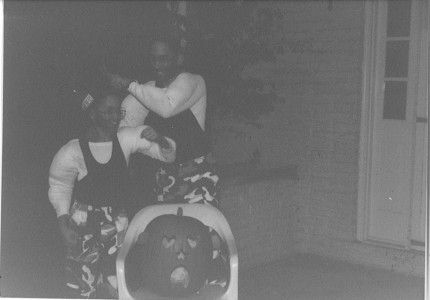 What kid didn’t love the Bushwhackers? Courtesy of my parents.

The Bushwhackers are awesome. Curtis Axel is pointing at the Wrestlemania fan. He counts how many days he’s been in the Royal Rumble. He enters himself in the Andre the Giant Memorial Battle Royal. Ryback comes out to stop the Axel movement. Why would the Authority give Ryback a soft win? Ryback then enters the Battle Royal. Shell Shock.

Seth Rollins introduces Randy Orton. Daniel Bryan starts against Rollins. Bryan tags in Roman Reigns early. Orton takes over early on Reigns. Bryan works over Orton’s arm. Orton back breaker. Naturally the heels are in control after the break. Orton springs out of the corner with a clothes line. Rollins comes in to continue the beating. Reigns creates an opening. Bryan knocks Orton off the apron. Bryan with a running clothes line. Yes kicks. Yes Lock that is broken up by Orton. Reigns takes out Orton. Rollins takes out Reigns. Bryan takes out Rollins. J&J Security distract Bryan long enough for Rollins to take advantage. Bryan fights out of the predicament but misses a diving head butt. Reigns gets the hot tag. Corner clothes lines. Mercury ends up taking a Superman Punch. Orton & Reigns slug away. Rollins tags in at an inopportune time. Rollins sets up for the Curb Stomp. Superman Punch. Bryan tags in. Reigns acts dismayed then laughs it off. Running Knee for the win. Orton looks like he’s going to snap on Rollins then pats him on the shoulder and leaves. Weird way to start this angle. (Next Day Note: If the WWE had Orton on TV after the Royal Rumble and decided to go this route, I understand. Now it’s just going to feel rushed.) – Kevin