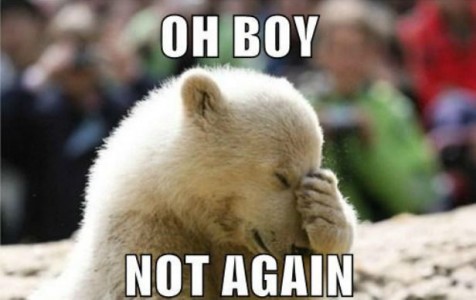 I’m just an idiot for not setting my DVR manually at this stage. On an upside, I enjoy not having to watch three hours of this dreck. I will 100% be filled in about what has already happened by show’s end. Unless there was a Diva’s match.

(Next Day Note: It was told to me by my co-host for this evening, Chris Calamita, that I needed to watch or listen to the promo between Kevin Owens and John Cena. It was something that wasn’t recapped which is surprising. Any Cena segment not recapped is amazing. It’s even stranger to me after watching it. I was not all that impressed by Owens screeching after the Elimination Chamber match. This one however felt very genuine and he didn’t screech which helped. Owens was pointing out that he did what he set out to do but was bummed that his child was more concerned about Cena’s well being than his father winning the match. Cena came out and said that the reason his Owens’ child looks up to Cena is that Owens has the same attitude that Cena does. He doesn’t give up. If I had a nickel for every time I typed this next sentiment,  I’d at least have a dollar, but Cena is a great promo when he lays off the poop jokes and makes a point. Personally, I would have just told Owens he was a terrible father and that’s why his child doesn’t look up to him.)

I started by having to watch another enjoyable promo from New Day. It drove me bananas when I was listening to Wade Keller and Steve Austin acted like the WWE planned New Day being so horrific as baby faces that they’d make great heels. That was go away heat guys. That was before a match between Kofi Kingston taking on Dolph Ziggler. Ziggler almost got the win with the big DDT. Xavier Woods tries to interfere. Ziggler reverses a roll up from Kofi for the win. New Day attacks. The Prime Time Players make a save. I’m taking a guess a six man match will be on my TV when the commercials stop.

My guess was right. I don’t mind the Network pimping when they mention PPV matches. They just shouldn’t have shown as many stills from the event to help sell JBL‘s point though. Darren Young is taking a beat down from New Day who were taking their turns. Titus O’Neil with what I believe to be his first ever hot tag. The crowd is eating it up. Titus wins with a pump handle slam into a power slam. Lana was just watching from the stage. Awkward. (Next Day Note: I’ve got no clue what they’re doing with Lana & Dolph. If she’s a mole, shouldn’t she be at ring side to know his weaknesses for Rusev. If she really likes him, shouldn’t she be at ring side to cheer him on?)

Roman Reigns delivered an offer to Seth Rollins at the top of the show making a ladder match between Dean Ambrose and Rollins for Money In The Bank. There’s one segment to catch me up. The WWE thinks they can make us believe Mark Henry might take Reigns spot at MITB. I’m also done with the belt kleptomania. The WWE does realize they did this story line in the build up to Wrestlemania, right? It wasn’t that long ago. It seems I missed a match between King Barrett and Reigns earlier. That will most certainly not be recapped. Reigns is getting worn out by Henry. Reigns catches Henry with a Superman Punch on the outside. Reigns beats the count and wins the match. Henry attacks when Reigns is cooling off. Reigns is left laying.

Roman Reigns is met by Steph & HHH in the back. Bray Wyatt is his next opponent. I’m completely down with Bray Wyatt being involved in MITB. It’s funny what one does to keep their job. Curtis Axel & Damien Sandow are the poster boys for this sentiment. I’m not going to buy a Sonic Shake because of them. There are tastier shakes in town.

I bought the selling of the announcers for Nikki Bella‘s improvement in the ring. As usual, I have no idea what they are doing with Nikki’s character. We were just supposed to sympathize with her because Naomi & Tamina were being meanie pants to her and Brie but now Nikki is in the ring doing push ups a la Scott Steiner? Just to top off this nonsense off, Brie rolls into the ring and gets the pin on Paige. The referee missed 20 pounds and hair color to blow this one just to prove women look all the same, just like African Americans.

Randy Orton is taking on Sheamus at 10:15. How’s the semi-main event guys? Solid match at the break. This match is on auto pilot for me. I’ve seen this match so many times. I was surprised at Orton’s T Bone Suplex. Sheamus nails Orton with a chair to cause the DQ. Sheamus attacks Orton and leaves him lying after a pair of Brogue Kicks. I don’t mind that. You need to protect both of them. Rusev is a broken man. He is crushed this time. He will get back all of it. Another good promo from him.

The Lady was not fond of Neville‘s look. I assured her he was a fine wrestler. We shall see if a live appearance changes her mind. He is taking on Bo Dallas again. Considering that Neville is in the MITB match already, he should win rather quickly. Neville has not gotten to show off this offense enough since he’s been positioned as the small guy in most matches. Red Arrow for the victory.

Roman Reigns vs Bray Wyatt is the main event. Nothing much catches my attention in this match until Wyatt sells the apron drop kick like a king by throwing himself against the barrier. Nice twist on that spot too with Wyatt standing on the outside for Reigns to hit it. Reigns misses a Superman Punch. Wyatt with a urinogi but only gets two. Reigns rolls through a pin attempt. He comes out on the other side with a Superman Punch. The Authority surrounds the ring. Kane is on the apron. Sister Abigail gets pushed out of by Reigns and into Kane. Reigns spears Wyatt for the win. The Authority attacks when Dean Ambrose‘s music hits. He ends up sneaking through the announcer area. Ambrose gets the better of the exchange when he tosses the belt back to Rollins so that he can get him with another Dirty Deeds DDT. – Kevin