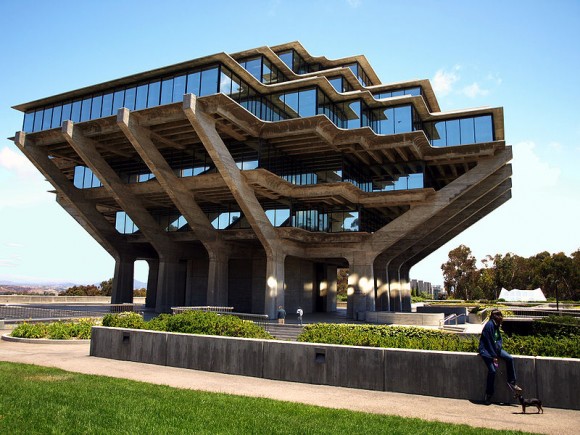 The Geisel Library in San Diego on the campus of the University of California, San Diego. Designed by William L Pereira & Associates.

HHH & Stephanie McMahon greet us. They go over the high lights of Hell In A Cell. They give Seth Rollins a glowing review. They also blow him while he’s in the ring. Rollins is speechless because the crowd isn’t reacting. They finally barely boo after he lauds the Authority. I’m not exactly hanging on their every word. Roman Reigns hits the ring. He’s going to take the title from Seth. His part wasn’t much but he is getting a reaction.

New Day comes out to be Reigns opponent. They explain the differences ending with mentioning that they are champs and he is not. They’re being dicks while being entertaining. Kofi Kingston is going to make magic in the ring. Do we count the predictable early match break as part of the Raw formula problem? Big E argues with Reigns so that Kofi can take advantage. Kofi wears down Reigns until the inevitable come back. Kofi fights out of a Samoan Drop but still gets popped. Kofi goes for a Trouble in Paradise but Reigns spears him instead for the win.

Cesaro gets to lose to Kevin Owens again. The announcers are forced to act like there is a chance in hell Cesaro can win. Cesaro even gets to enjoy some offense to start the match out to make us believe. Stalemate at the break. Cesaro gets to carry over the offense after it. Cesaro even pulls out a cannon ball. Owens gets the upper hand when Cesaro goes for the swing. Nice work to turn it into a DDT. Pop Up Power Bomb not too long after for the win. Paige is acting posh back stage. Becky Lynch & Charlotte are appalled that she’s on the phone. Charlotte threatens Paige over the Natalya beat down. Paige is pumped that they’re back together as a team. Becky is still skeptical.

Team PCB is fighting Team Bella. I’ve got nothing for you audience. I have a feeling I know the ending since I had to babble on Twitter so it makes sense but it’s still mind numbing that they need to do it this way. The WWE continues to goof up the booking in the Diva’s Division. Becky Lynch gets the hot tag. All the ladies get involved except Paige. Nikki nails Becky with a fore arm. Rack Attack for the win. The mind numbing booking continues. Paige attacks after the match. Why didn’t she just sabotage the match?

Renee Young gets to interview Zeb Colter & Alberto Del Rio. Zeb is now imaging Mexico & the US as one country. I really hope the money is worth it Alberto. Your piss poor booking has already started again.

Del Rio’s match against Neville is up after the break. Neville cranks up his offense after a short sell spell to start the match. Time for another break. Del Rio is pulling open Neville’s mouth. Del Rio rolls out of the ring. The down side is Neville hitting the over the top rope twist splash. Good thing Neville doesn’t smoke as much pot as Evan Bourne. Del Rio turns it back in his favor with a running enziguri. Neville rolls an arm breaker attempt into a pin. Neville gets hung in the Tree of Woe. ADR stomps him for the win. Thank goodness that was a finish because that looked brutal. I thought he might go for the cross arm breaker.

Move over Divas, you’re not the only ones who get to have six person matches on a consistent basis. Tonight’s participants are The Dudley Boyz & Ryback taking on Rusev, King Barrett & Sheamus. Devon gets to take the beat down with a quickness. This crowd really wants Ryback. They get him. Bubba Ray comes in on a blind tag. Ryback gets back in. Triple Meat Hook clothes lines by the babies. Wassup. The people never get tired of the tables. Barrett rolls up Bubba as he waits for the tables. Brilliant. I love it.

Bray Wyatt is in the middle of the ring. Last night was war at HIAC. Wyatt promises that he will dance with Roman Reigns again. The Undertaker is his resurrection. He is feasting on the soul of the Undertaker as he speaks. Just ridiculous. I’m not placing my hand on the TV, Bray. The seat is comfy. RIP Phenom. Kane ends up coming out. He could job to Bray clean too. The lights go out and the Family surrounds Kane. Rowan & Harper get dispatched quickly. Strowman takes more time but still gets low bridged quickly. The Family finally gets the upper hand. They carry off Kane too.

Dolph Ziggler is taking on Big E for his spot in the main event. Tyler Breeze comes out with Summer Rae. There is a “VIP” section for them at ring side. Distractions keep allowing Big E to keep the upper hand. They get a break for their match too. Ziggler slaps on the sleeper to get a break. Big E nails a shoulder block in the corner. Big E barks at Dolph that “He’s his daddy.” Eric Nelson loves abdominal stretches. Ziggler gets out and hits a drop kick. Dolph clunks his head off the ring post when he goes for the splash. Big E wastes time by taking a drink from the VIP Lounge. Ziggler recovers to hit a Fame Asser. Ziggler kicks out of the splash. Big E wastes time again. Super kick by Ziggler. Big E hits the post with his shoulder. Ziggler hits the Zig Zag on the bounce back for the win. Dean Ambrose gives Roman Reigns a pep talk.

Seth Rollins gets a spot at the announce desk. I’m guessing this is a race between Dolph Ziggler & Roman Reigns. The usual mish mash of spots going into the last break. Ziggler is getting beat down by Owens & Del Rio after the break. Reigns gets a boot to the head by Del Rio. Owens & Del Rio finally square off. Del Rio gets the kick to the head on Owens but boots him out of the ring. Reigns gets fired up. Ziggler ends up squaring off against him. Reigns only gets a two count from a sit down power bomb. Del Rio tries to take advantage of the Superman Punch on Ziggler but Ziggler kicks out. Ziggler hits the Fame Asser on Del Rio for two. Del Rio tosses Ziggler into the air to land face first. Ziggler crotches Del Rio. Owens pulls Ziggler off Del Rio. Owens gets to hit a pair of cannon balls. Owens & Reigns show down. Reigns turns a Pop Up Power Bomb into a Superman Punch. He follows it up with a spear for the win.