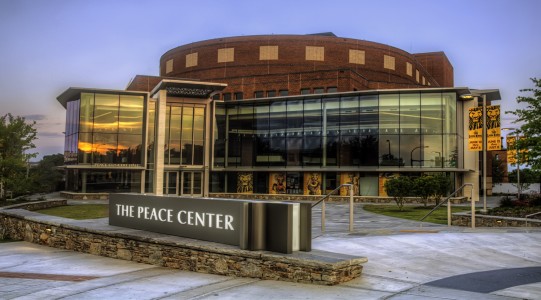 The Peace Center in Greenville SC. Saved from scartshub.com.

We start off with some love for the Parisians. The follow up is chanting from French monks or at least the Undertaker & Kane‘s druids. They keep the mood lighting on for the promo so that Taker doesn’t look too old. His rhetoric doesn’t sound any more ridiculous than Bray Wyatt’s. Kane even gets a little mic time to continue the campiest of all camp. Bray Wyatt comes out with the Family but they remain on the stage. He wants to be the new Army of Darkness. I can only hope it’s a play to get Bruce Campbell to host Raw. The Druids end up attacking Taker & Kane. They make quick work of the Druids.

Trying to find the location of Raw this week caused me to see the result of Neville vs Kevin Owens. Not that there is much of a surprise story line wise. Neville gets in the early offense. Owens is on the offense after the break. Neville barely gets back in the ring at a long nine count. Owens keeps taking it to Neville. Owens misses a charge. Neville capitalizes with a nasty German Suplex. Neville dodges a Pop Up Power Bomb but Neville super kicks him. Neville gets a two from a reverse huracanrana. Neville charges in. Pop Up Power Bomb for the win. Is the WWE trying to get Owens over? The Pop Up Power Bomb is becoming more and more like the RKO.

Poor Michael Cole has to pretend that camera pointed at HHH &  Kevin Owens doesn’t have a microphone. Is the WWE trying to get Seth Rollins over? Inspirational motivation after a devastating injury is pure baby face.

Tyler Breeze along with Summer Rae is set to take on R Truth. He gets to job near his home state. Truth is doing the “Wassup!?!” song. Has that been retired for a while or is that just me? Does anyone really care? I’m guessing no. JBL loves Breeze when he comes out but is now pissed that he is using chap stick. R Truth hurts his leg on the Axe Kick so he doesn’t get the pin. Beauty Shot soon after for the win. He wasn’t impressive Cole.

In one of a number of odd match ups, Dean Ambrose is taking on Dolph Ziggler. They start oddly with a test of strength. It’s strange enough that the announcers mention it. They continue countering each others moves in the early going. Ambrose is the second person to use a single leg crab tonight. Ziggler is still selling the knee. They trade pins then collide in a double cross body. They both then fall to the outside off the apron. Ziggler gives Ambrose a face buster from the top rope but hurts his knee. Ambrose rolls out of the ring to get more distance. Ziggler super kicks Ambrose but only gets two. Ambrose comes out of an exchange and hits Dirty Deeds for the win. Fun match. Ambrose is ready to throw the rules out the window at Survivor Series. Fun short promo.

The New Day complains about not getting TV time on the Tonight Show or ESPN. They mock the Usos for getting injured at their hands. They make fun of Ryback too. As they should. The Usos are dressed and painted up all kinds of French. Luckily Ryback didn’t color coordinate with them.

The match starts in the next segment. Uso dive early. I love that the stomping in the corner is now the Unicorn Stomping. Big E can’t put away Jey after a splash. Ryback starts to get upset when the referee misses his tag. New Day tags out to infuriate him more. Big E slaps Ryback in the head. Ryback flips out and gets his team DQed. He then destroys New Day by himself. The Usos could have at least super kicked Xavier Woods into Ryback.

HHH has a sit down, chair backwards talk with Cesaro. He tells him he needs that little bit of something extra. He goes sinister and tells him to be ready to do anything. Cesaro plays it straight. Roman Reigns hits the ring.

Reigns gets the mic after the break. He knows that the road is going to get harder as it goes along. The Tournament ends with him being champion.

The match between Cesaro and Roman Reigns happens in a third segment. Cesaro cart wheeled on the top rope. Cesaro keeps getting more impressive. Cesaro gets a pin attempt after a Gut Wrench Suplex. Cesaro had a great spring board European uppercut. Cesaro tosses Reigns shoulder first into the post. Cesaro charges but Reigns gets a boot up. Cesaro gets the Uppercuts in the corner. Reigns fires back with his own clothes lines. Cesaro catches the Drive By and turns it into a Cesaro Swing. Cesaro locks in the Sharp Shooter in the middle of the ring. Cesaro turns it into a Cross Face when Reigns starts to wiggle out. Reigns squats up Cesaro and gives him a Samoan Drop. Cesaro gets dumped outside. He hits the elbow on the apron on his way down. The Drive By connects this time. Cesaro blocks a tenth clothes line by Reigns. Roman power bombs Cesaro who has his arm tied up. Super Uppercut when Reigns goes for a Superman Punch. Cesaro drop kicks Reigns off the top ropes to the floor. Cesaro’s arm goes out on him. Reigns Superman Punches him. Uppercut by Cesaro. Backslide by Cesaro. Reigns connects with a Superman Punch and Spear for the win. What kind of power guy goes for a back slide? Cesaro deserves to lose for that even if he was even holding down the arms with more vigor than most.

The Ascension gets to lose to the Dudley Boyz. I’m barely paying attention to this match. Devon gets a hot tag against Victor when I do start paying attention. 3D in short order for the win. It’s official, the Divas are the main event as they say Alberto Del Rio is taking on Kalisto next. Zeb Colter does the talking for him. HHH congratulates Zeb. HHH offers ADR the chance to be The Man.

Alberto Del Rio takes it to Kalisto quickly. Kalisto shows off his speed to gain an advantage. Kalisto sells a back cracker that comes moments later. Del Rio pulls at the mask of Kalisto. He starts kicking him in the Tree of Woe. Del Rio charges and ends up shouldering the post when Kalisto pulls up. Kalisto barely gets clipped by a clothes line to lose momentum. Huracanrana from the knees only gets a two count. ADR ties him up in the Tree of Woe again. Kalisto fights out but gets dumped back into the Tree. Double Stomp for the win. That finisher is so stupid. Kalisto pulled up to miss a charge earlier. Why wouldn’t he let go of the damn ropes to avoid a double stomp?

The WWE has done a good job of hyping up this contract signing between Paige and Charlotte. It’s just too bad that they haven’t been hyped heading into this show down. Michael Cole has to provide more depth to their friendship by talking about them bonding in NXT training camp. Charlotte wells up some tears talking about David Fleihr. Paige calls all of her tactics games and just tossing their reasoning out the window. Charlotte tells us that champions need to be role models. Paige is made sick by Charlotte. Paige then calls for Ric Flair. I thought her family didn’t matter? I’m so confused. Paige uses the little brother death as bait. Charlotte takes it and attacks. The referees eventually break them up but not after Paige shows shoulder from a ripped jacket. Paige looks confused at the top of the ramp. Charlotte looks ready to cry. – Kevin