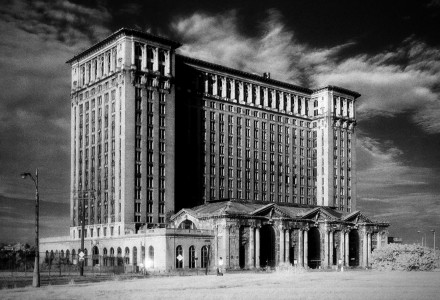 (Next Day Note: This week’s architecture lesson is courtesy of the French if you didn’t happen to notice all of the extra letters in Beaux (pronunciation Bose like the speakers) on that first word. It was the revival yet again of classical architecture which first happened in the Renaissance. The Beaux Arts movement started in 1795. It had an influence on a number of American architects including the great H.H. Richardson, whose buildings I will need to feature at some juncture. The classical part of the architecture for this building is more well seen with the double column entrance and symmetrical facade. The columns are of the Corinthian style which was created in Rome rather than Ionic & Doric which originated in Greece. It is now in disrepair hence the gloomy picture but one can see it’s former glory. Architecture lesson over.)

We start with a review of FastLane’s main event. I’m sure “someone” was just there to tape the incident of Dean Ambrose being attacking by Brock Lesnar. I think we can set the Ambrose vs Lesnar match for Wrestlemania. I’d sure love to know who’s Wheaties Bray Wyatt pissed in.

Vince McMahon comes out to talk well about his family. He then gives the Vince McMahon Award to Stephanie McMahon. So that’s how we’re going to play this award? Like it’s a Slammy? Fabulous (Note the big dose of sarcasm.) Shane McMahon interrupts her to great applause. Shane is pissed that the reward is a Slammy. Stephanie plays a good princess but am I allowed to be tired of it? Shane realizes that Stephanie doesn’t know what he’s there for. Stephanie is mad at Shane for leaving the company. Shane & Vince cut a deal back in the day that Shane didn’t ever lose his spot. Vince won’t confirm that the deal happened. He keeps trying to get the conversation back stage. Shane then shows Stephanie out of the ring. Shane is ready with the fifth generation to be in charge. He wants control of Monday Night Raw. Vince allows Shane to control Raw if he wins one match of Vince’s choosing. Shane agrees to the stipulation. Vince puts him up against The Undertaker. To make it believable, they make it Hell in a Cell.

Neville is teaming with the Lucha Dragons. Of course their opponents are New Day. They now have Booty O’s cereal. These guys are extremely creative. Xavier Woods is taking a beating for the heels. Woods turns it around on Neville but wastes too much time. Big E stops Neville from tagging. He starts selling for the baby faces. Neville sells through a second commercial for their match. Woods crashes into the steps to create an opening. Sin Cara gets tagged in. He cleans house. People don’t want to cheer him. Sin Cara suicide dives onto Kofi. Neville hits a 450 off the apron. Sin Cara goes for some weird move. Kofi gets out by pulling on Sin Cara’s mask. Trouble in Paradise for the win.

Jojo interviews Roman Reigns. He only knows that Dean Ambrose is under going tests. He knows that all of the tricks are up and that it’s just him and HHH at Wrestlemania.

Paul Heyman tells us that Roman Reigns was going to tap out. Dean Ambrose was the one that really screwed things up by turning the three way match into a street fight. They are also mad at him because he wasn’t aware of what was coming from Reigns. Heyman then stumps for Brock Lesnar as the real main event of Wrestlemania. Dean Ambrose finally arrives driving an ambulance. Ambrose collapses before Lesnar’s feet. Lesnar decides to leave him alone. Dean issues a challenge for a street fight at Wrestlemania. Lesnar F5s Ambrose onto the floor. Heyman accepts the challenge.

The Dudley Boyz have to remind everyone that they turned heel. They should really get rid of the “Waaasssuuuppp” shirts too. The Usos get sucked into the Dudleyz so that the Ascension can jump them to start the match. Jey Uso gets something of a hot tag. Super Kick Party. Splash for the win. Nice statement win for the Usos who haven’t whipped someone in a while. If they save this match for Wrestlemania, I wouldn’t argue. It’d be a nice 12 minute match.

Chris Jericho, you should not call your match great even if it was. He wants to say a few things to AJ Styles. I don’t like his music. Jericho tells him that he’s worthy and that he respects Styles. The Social Outcasts make fun of them for hugging and shaking hands. They tell them that no one is buying Y2 AJ. They say that they’re a team and that Styles & Jericho need to get out of their room.

Jericho & Styles end up taking on Heath Slater & Curtis Axel. Bo Dallas grabs Styles leg so that the heels can gain control. Styles regains control with a Pele Kick. Jericho & Axel both tag in. Jericho cleans house. He then misses a Lionsault. Styles nails the spring board forearm on Slater. He then jumps onto the other three on the outside. Meanwhile, Jericho slaps on the the Walls of Jericho for the tap out win.

Stephanie is complaining to HHH. She gets to give Roman Reigns the news. After the break, she catches up to him. Stephanie tells him that he has a match against Sheamus. She implies that the League of Nations is going to beat him up without saying it.

R Truth is wanting Goldust to stop popping up out of nowhere. Truth complains about all the bad stuff that has happened to him. Goldust sells their team. Goldie tells him he can predict every move by Truth. R does a misdirection then smashes the cake into Goldie’s face.

Kane, Ryback & Big Show are taking on the Wyatt Family again. Bray Wyatt joins in the fun today. Ryback gets the “Goldberg” chants again. He also takes the beating. Ryback breaks away after a missile drop kick. Big Show is on house cleaning duty this match. Braun Strowman low bridges Show when Mike Chioda is tending to someone. Big Show side suplexes Harper to break up a sleeper attempt. Kane gets his chance to clean house too. Ryback decides to leave ring side. Kane gets distracted. Bray Wyatt gives him Sister Abigail for the win. The Wyatts get a somewhat tainted win. Not much of an endorsement.

Ryback is done being in tag teams. The spot light should be on him. He wants to break the glass ceiling and take the brass ring.

Sasha Banks gets a match. Naomi is her opponent. Tamina is at ring side as expected. For some reason, JBL has to complain about someone’s, in this case Banks, ego? JBL then points out his own hypocrisy. Naomi takes control just before the break. Becky Lynch ends up taking out Tamina. Banks locks in the Bank Statement for the tap out victory. Charlotte‘s music hits. She wonders who will be as her opponent at Wrestlemania. If it isn’t both of them, I’ll be disappointed.

Having The Godfather next to Sting makes the selection for the HOF more ridiculous than it already was.

Roman Reigns is taking on Sheamus with Alberto Del Rio, King Barrett & Rusev. Sheamus does the smart thing and attacks Reigns Kimuraed arm. Reigns got a few spots of hope but mostly sold the arm injury. The League of Nations got tossed from ring side. Reigns gets an opening with the Superman Punch. Reigns spears Sheamus on the outside. HHH shows up in his wrestling gear. He slowly disrobes and comes to the ring. Reigns attacks as HHH reaches the ring. (Next Day Note: I suppose that made it a DQ finish. The fact that the League of Nations didn’t help in the beat down was pretty telling.) Superman Punch on HHH. Reigns knocks HHH over the barricade. HHH hits Reigns with the ring bell. HHH then slams Reigns head off of the ring table. HHH punches him in the face until referees break it up. HHH then Pedigrees Reigns on the stairs. The crowd chants “One more time.” Isn’t it a weird reaction no matter what? You’re cheering the guy who is pushing Reigns down your throat. – Kevin